Of all the supporting cast in my Charles Lindbergh biography, only a couple of non-relatives are mentioned as often — and known to so few today — as Grace Lee Nute. In fact, until I read an article about her last week in the [Minneapolis] Star Tribune, I knew little about Nute beyond what I gleaned from her contributions to the Lindbergh papers at the Minnesota History Center.

A New England native, Nute studied literature at Smith College, about a decade before Lindbergh’s future wife, Anne Morrow, attended the same school. She completed her doctorate in American history at Harvard in 1921, then that same year took a job as curator with the Minnesota Historical Society, where she began to research the Lindbergh family in the mid-1930s. She published an article on Måns Lindbergh (who fought in the Civil War with an Illinois regiment and tried to establish a Swedish immigrant colony in Minnesota after the war), but her major project was a biography of Måns’ half-brother, C.A. Lindbergh — father of Charles. Her interviews with C.A.’s siblings, children, and friends still form a major part of the Lindbergh Family Papers and helped me flesh out the early chapters in my biography of Charles, who corresponded frequently with Nute — who also interviewed him in person at the Lindberghs’ home in France in the summer of 1938.

In the process, Nute seems to have realized that Charles’ grandfather, August Lindbergh (born Ola Månsson), had left Sweden and changed his name not because of the political and financial reasons typically cited to that point, but because he had an affair with the Stockholm waitress who became his second wife — and gave birth to C.A. out of wedlock.

I didn’t want to belabor this in the biography itself, but… well, it was fascinating to watch her correspondence with Charles Lindbergh’s half-sister Eva grow increasingly testy. “I think,” Nute tried to reassure her in December 1939, that “Ola Månsson is a big enough figure in history that he does not need evasion or omissions in the telling of his story.” But learning the truth was a shock to C.A.’s sisters, and Eva Lindbergh Christie could only “imagine what would ensue if this were given to the public with the consent of the family.” By the end of January 1940, she was questioning “the ethics of this thing… I do not like the idea of unsavoury personal matters being dished out for the country to lap up.” Given the “choice between intellectual honesty on my part and wounded pride on your aunts’,” Nute felt she had a clear path:

…I can hardly allow myself to be put in the position of an historian being dictated to as to how history is to be written. That sort of history may do for Stalin, Mussolini, and Hitler, but, fortunately, it is not the kind that Americans want.

For his part, Charles Lindbergh seems to have understood Nute’s position and tried to argue her case with his family. But after the start of World War II, the project fell apart, as the Lindbergh name was tarred by association with the anti-Semitic comments Charles had made in campaigning against American intervention in the war. By 1943, MNHS had to tell Lindbergh that “in view of the fact that work on the biography of your father would probably involve the society in political controversy the society does not feel that it can in any way become a sponsor of such a biography.” In the end, it wasn’t until the early 1970s that historian Bruce Larson finished the C.A. Lindbergh biography that Nute had begun. 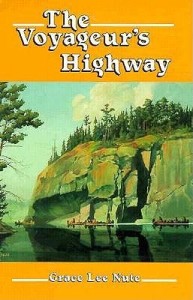 She kept working for the state historical society until 1957. Coincidentally, part of her post-MNHS career paralleled Lindbergh’s. At the same time that the former aviator began to throw himself into environmental conservation and wrote about the importance of preserving wildernesses, Grace Lee Nute worked with the Minnesota Natural History Society and advocated protection for what became the Boundary Waters, having earlier written histories about the French Canadian voyageurs who traversed Lake Superior and the rivers and lakes of northern Minnesota.

It’s behind the Strib paywall, but if you’re interested, you can read the full profile (by University of St. Thomas professor Mark Neuzil) here. You can also read Nute’s brief MNHS biography here, with links to some of her published works.