I’ve written before that “I’ve dreaded the day I’ll finally need to write a chapter or two on [Charles] Lindbergh’s response to the rise of Nazi Germany.” That concern came back to mind yesterday, when I visited the U.S. Holocaust Memorial Museum and went through the temporary exhibit on “Americans and the Holocaust.” About halfway through, there’s a section on the isolationist America First Committee, which got a boost when Lindbergh began to speak on its behalf.

Misguided as I think that movement was, people could be reticent to take part in a second world war without necessarily being pro-fascist or anti-Semitic. So even I was taken aback by a series of political cartoons for the left-wing, pro-intervention magazine PM in which Theodore Geisel (Dr. Seuss!) depicted Lindbergh as a Nazi stooge: his plane trailing a banner that reads “It’s Smart to Shop at Adolf’s: All Victories Guaranteed” in one; in another, Lindbergh pats a swastika-emblazoned sea serpent on the head and says, “‘Tis Roosevelt, Not Hitler, that the World Should Really Fear.”

Cutting as they are, most of Geisel’s cartoons don’t suggest that Lindbergh’s views on Jews had anything to do with his isolationism. But a cartoon published on September 18, 1941 casts Lindbergh in a more sinister light: wearing a gas mask, the aviator shovels “the Lovely Goebbels Stuff” out of a garbage truck labeled “Nazi Anti-Semite Stink Wagon.”

That cartoon came out one week after Lindbergh’s most infamous speech. As the exhibition text explains:

The America First Committee’s reputation changed significantly after Lindbergh accused Jews of being “war agitators” in a speech at Des Moines, Iowa, on September 11, 1941. Newspapers and magazines across the country denounced the committee and Lindbergh himself for promoting antisemitism and intolerance. America First Committee leaders denied the accusation, but the criticism continued and the organization’s influence diminished significantly. As soon as the United States entered World War II in December 1941, the committee disbanded.

Here’s the relevant portion of that speech; it comes after Lindbergh blamed the embattled British for trying to draw America into the war and before he lambastes the Roosevelt administration:

It is not difficult to understand why Jewish people desire the overthrow of Nazi Germany. The persecution they suffered in Germany would be sufficient to make bitter enemies of any race.

No person with a sense of the dignity of mankind can condone the persecution of the Jewish race in Germany. But no person of honesty and vision can look on their pro-war policy here today without seeing the dangers involved in such a policy both for us and for them. Instead of agitating for war, the Jewish groups in this country should be opposing it in every possible way for they will be among the first to feel its consequences.

Tolerance is a virtue that depends upon peace and strength. History shows that it cannot survive war and devastations. A few far-sighted Jewish people realize this and stand opposed to intervention. But the majority still do not.

Their greatest danger to this country lies in their large ownership and influence in our motion pictures, our press, our radio and our government.

We cannot blame them for looking out for what they believe to be their own interests, but we also must look out for ours. We cannot allow the natural passions and prejudices of other peoples to lead our country to destruction.

With some other written statements quoted in Scott Berg’s biography of Lindbergh, the Des Moines speech helped the late Philip Roth conjure a counterfactual scenario in which Lindbergh defeats FDR in November 1940, comes to an “understanding” with Hitler, and presides over an increasingly anti-Semitic America. (See my recent Anxious Bench post on Roth’s alternative history novel The Plot Against America.) 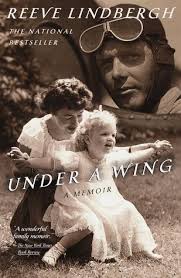 In her 1998 memoir, Under a Wing, Lindbergh’s daughter Reeve reflects on hearing the Des Moines speech for the first time, during a visit to the Lindbergh House in Little Falls, Minnesota:

It was not the first time I had come across this speech but it was the first time I had heard it spoken in my father’s own voice. I was once again transfixed and horrified, again ablaze with shame and fury—‘Not you!’ I cried out silently to myself, and to him—‘No! You never said such things! You raised your children never to say, never even to think, such things—this must be somebody else talking. It can’t be you!’ I felt a global anguish—the horror of the Holocaust, the words of my own father ignoring the horror, but surely not condoning the horror, surely not dismissing, or diminishing it, surely not. But I also felt a piercingly personal rage, and if I could have written it down it would have looked like this: ‘How could you do this to Mother? How could you leave her with this? Just die, and leave her alone, to answer the charges this speech forever invites? Why didn’t you leave instructions, Father? Why didn’t you tell us what to do about these words you left behind, on tape, before I was born, with this reputation that does not fit my experience of you? Did you think it was enough to ignore the accusers, to say briefly, tight-lipped, “I’m not anti-Semitic!” and ask us with your own silence to do nothing at all, to say nothing at all, forever? Do you know how hard that is? Do you know what you have asked of us? Do you have any idea what it feels like to be someone who loved you, and is left with this? How could you have done this to us? How could you have done this to me?

Reeve simply can’t reconcile the Lindbergh of the Des Moines speech with the father of her childhood: “How could someone who spoke the words my father did in 1941, never repudiating or amending them for the rest of his life, how did such a person then raise children who, by his instruction and his example, day after day and year after year, had learned from him—not simply from our mother, but from him too—that such words were repellent and unspeakable?”

So how will I handle this chapter of my “spiritual, but not religious” biography of Lindbergh? It’s a question I’ll be thinking about a lot as I start to dive into his private correspondence and journals this month. I don’t want to flinch from making an honest evaluation of an undeniably ugly side of my subject, but I also want to bear in mind Reeve’s warning to herself:

I was born after the war, and I know that there are many things I will never understand about my family history, and the history of that era, many things I cannot understand about the ways that words and philosophies alter and are re-interpreted over time. I know, too, that there is great and dangerous arrogance in passing judgment upon our parents, and I wonder, when we do so, whether we invite our children, in turn, to pass judgment upon us