A series of posts inspired by my recent trip to Europe, scouting a January 2013 travel course on the history of World War I. Today continues a series-within-the-series on how WWI was commemorated. 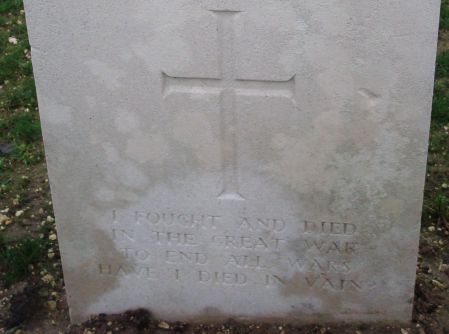 Yesterday I showed the image of an Australian soldier’s gravestone, its epitaph asking “Have I died in vain?”

Immediately above those words is carved a cross, a symbol that assures Christians that death itself has been conquered. As the apostle Paul wrote, “The sting of death is sin, and the power of sin is the law. But thanks be to God! He gives us the victory through our Lord Jesus Christ. Therefore, my dear brothers and sisters, stand firm. Let nothing move you. Always give yourselves fully to the work of the Lord, because you know that your labor in the Lord is not in vain” (1 Cor 15:56-58).

Put together, this stone hints at a world in flux: Christian symbols and rituals remained common, but it seemed that Christian belief — or perhaps more, the Christian religious imagination — was losing its influence over the denizens of what many in 1914 had still called Christendom.

To be sure, even famously secular France retained more than a veneer of Christianity even in its official places of memory. The largest French military cemetery (outside the commune of Ablain St-Nazaire) has its own basilica (Notre Dame de Lorette), and churches like the great cathedral of Amiens became sites of patriotic commemoration. Notre Dame d’Amiens features several plaques honoring the Commonwealth soldiers who helped protect the city from the German advance, plus this statue commemorating the dead sons of Amiens itself — a kind of pietà with a deceased poilu substituting for Christ.

But as nations like Anglican Britain, whose monarch then (as now) headed a church as well as a state, sought to make meaning of the war, their architects reached back to a pre-Christian era in search of symbols of reverence, dignity, and greatness that would endure. The obelisk of ancient Egypt remained popular (marking army division memorials, among others), but the most famous British architects employed classical forms that featured only hints of Christian influence.

First, Sir Reginald Blomfield. While he is also well known as the designer of the Cross of Sacrifice that towers over all British cemeteries on the Western Front (a cross that our guide Carl insisted “was not religious” — it certainly is troubling to find a cross fused to the medieval symbol of a broadsword planted in the earth after battle), Blomfield’s greatest monuments featured Greek columns and Roman arches: Tyne Cot cemetery outside Ypres, and inside the town, Menin Gate, which commemorates unidentified British dead. (Along with patriotic sentiments of King and country, inscriptions on the latter do include this crib from the King James Bible: “They shall receive a crown of glory that fadeth not away” — 1 Peter 5:4.)

Second, Sir Edwin Lutyens, designer of the monumental Somme memorial at Thiepval and of the most famous commemorative image of the war, the Cenotaph. Discussing the latter in a post last July, I wrote:

…the Cenotaph is dedicated to “The Glorious Dead”—all of them, as it is a tomb in which no soldier is buried but any might be remembered.

Lutyens “took the form of Greek commemorative architecture but stripped it of any hint of celebration,” without “the slightest mark of Christian or contemporary patriotic or romantic symbolism, a feat which did not endear Lutyens or his work to traditional Christians,” according to historian Jay Winter.

Winter features the Cenotaph in his acclaimed study of WWI memorials, Sites of memory, sites of mourning. He ultimately praises the monument as a “work of genius largely because of its simplicity. It says so much because it says so little. It is a form on which anyone could inscribe his or her own thoughts, reveries, sadnesses. It became a place of pilgrimage, and managed to transform the commemorative landscape by making all of ‘official’ London into an imagined cemetery” (104).

(By this logic, of course, the “traditional” Christian ought not to be so worried by the lack of overtly Christian imagery. Since an inscribable thought or reverie should surely come to mind when one learns that Cenotaph comes from a Greek word meaning “empty tomb.”) 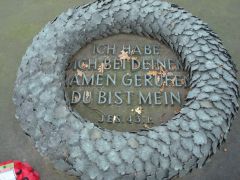 One eminently understandable reason for the relative scarcity of Christian language and iconography on WWI memorials and monuments would be that many non-Christians fought in the war. 12,000 Jews died fighting for Germany, for example, and Stars of David stand alongside crosses in that nation’s military cemeteries. (The French cemetery mentioned above has an entire detachment of Muslim gravestones — all pointing towards Mecca — in the shadow of its basilica. Most of the dead were colonial troops from North Africa.) However, that nod to religious plurality came decades later, during the cemetery renovations conducted in the 1950s, 1960s, and 1970s. One update not long after World War II relocated thousands of unidentified remains to what became the largest German military cemetery near Ypres: Langemark. This “Comrades Grave” is marked in part by a passage of Scripture shared by Christians and Jews: “I have called you by name; you are mine” (Isaiah 43:1, right).

While such interfaith commemoration came to German cemeteries later, British WWI cemeteries always featured uniform headstones rather than crosses. On the stone, the soldier’s faith is indicated by an appropriate symbol. Intriguingly, however, most any British military cemetery on the Western Front includes a handful of gravestones that bear no such symbol at all. Our guide described these dead as “atheists.” I suppose there might have been Christians who believed it inappropriate to use the cross as decoration, but I suspect Carl was generally right: there were probably more avowed non-believers in the ranks of British armies during World War I than ever before.

Yet here too there is complexity, and we ought not to view WWI as marking the inevitable secularization of the Christian West. I started with one Australian gravestone from the cemetery at Villers-Brettoneux. Let me close with another: that of a middle-aged private who died only three weeks before Armistice. 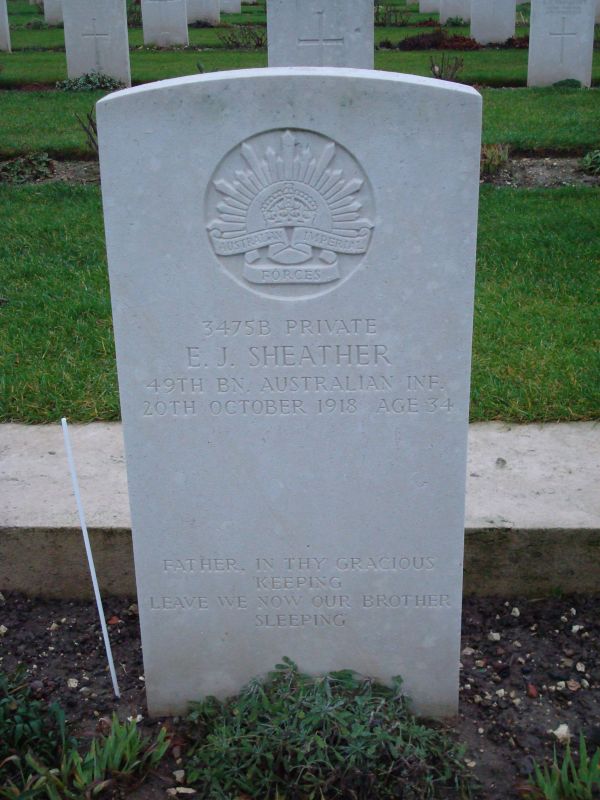 Ostensibly the grave of an atheist, given the lack of religious symbol. Yet when asked for an epitaph, Pvt. Sheather’s relatives supplied a prayer: “Father, in thy gracious keeping / Leave we now our brother sleeping.”

Next week: one more post on commemoration, plus some thoughts on museums with WWI exhibits.