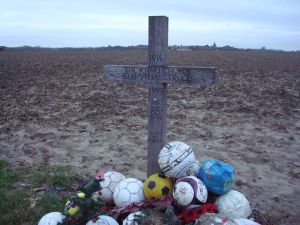 In a field outside the Belgian town of Ieper (or Ypres), one comes across a curious but moving sight: a wooden cross, with soccer balls piled at its base. The cross is carved to read:

It stands in what used to be No Man’s Land near Ploegsteert Wood (“Plug Street,” to British soldiers). By the end of the war both Adolf Hitler (a few hundred yards behind the cross) and Winston Churchill (a few hundred yards in front of it) had served in this sector of the Western Front.

On Christmas Day, 1914 — the day by which point World War I was supposed to have ended — British, French, and German soldiers along the Western Front spontaneously declared a truce. They buried their dead, exchanged gifts, compared photos of wives and children, and played games of soccer like the one this cross has been set up (by a group of British war reenactors called the “Khaki Chums” — read the account of their Christmas 1999 here) to commemorate.

My students will see those phrases again and again next January, during the travel course on the history of the First World War that my colleague Sam Mulberry and I will be leading. Nearly 100 years after the war started, and at almost every place that we’ll visit on our tour of the battlefields of WWI and even in the cities whose populations fought the war, students will hear that they ought not to forget what happened from 1914-1918.

The UK National Inventory of War Memorials lists over 40,000 memorials to WWI, some on the former Western front (where there are literally hundreds of British cemeteries, many of whose tombstones read, “Lest We Forget”) and others in cities, towns, and villages throughout Great Britain. Likewise, there is scarcely a single French commune that doesn’t have a WWI memorial (almost always either a statue of a poilu or an obelisk). As we’ll see in a later post, German memorials can be a bit harder to locate, but they’re there.

Cathedrals, churches, chapels, and synagogues have statues, reliefs, and plaques warning us never to forget what happened in 1914-1918. As do the colleges of Oxford and Cambridge. And the railway stations of London (see left). And markets and corporate headquarters.

And these are only the memorials located in public spaces intended to promote communal commemoration. As Jay Winter, author of the best book on the phenomenon, points out, “Commemoration also happened on a much more intimate level, through the preservation in households of possessions, photographs, personal signatures of the dead.” (Sites of memory, sites of mourning, p. 51) Hundreds of thousands of homes around the world became sites of memory and mourning as well.

WWI memorials are small and monumental, simple and grandiose, dignified and profane. Some (like the smaller surviving battlefield cemeteries) have been in place since the first year of the war. Others did not appear until the 21st century. Some reflect deep religious feeling; others reject the same. Many are the work of the same governments that sent nine million men to their deaths; others result from private initiative, and some of those (like the soccer memorial above) seek to commemorate elements of the story that governments might wish to overlook.

With so many divergent examples of commemoration, I hesitate even to begin to reflect on the theme. Winter’s book offers a much more significant interaction with the theme, plus the related one of mourning.

But I’d like to share at least a few, scattershot thoughts now that I’m a few days away from spending two weeks walking in the footsteps of World War I.

Today, I would simply observe that commemoration is never as simple as “Never forget.” Not only is there a seemingly infinite variety of commemorations, but what exactly are we not to forget? The heroism of those who died, or the futility of their efforts?

Of course, it’s often both.

Consider the cemetery at the Australian memorial outside Villers-Brettoneux, one of the spots where the Battle of the Somme was contested in 1916. As with all cemeteries of the British Commonwealth (interring English, Scottish, Welsh, Irish, Australian, Canadian, Indian, New Zealand, and South African soldiers), there are some common features. Two face each other: the Cross of Sacrifice (right) and a slab of stone inscribed, “Their name liveth forevermore.” Unlike American, French, and German cemeteries, which are dotted with crosses, representing the faith of most of their soldiers (more on that tomorrow), the troops of the British Empire are laid to rest under uniform headstones, each marked with the insignia of the soldier’s unit, his name and age (when known — about 50% remain unidentified), a religious symbol (if any — again, more tomorrow), and an epitaph chosen by the soldier’s family.

“Lest we forget” is popular as an epitaph, but so too are more explicitly patriotic statements (“For King and Country”), matching the somewhat martial feel of the British cemeteries. But now and then — and especially for soldiers who fell later in the war — epitaphs take a very different tack. Here’s one for an Australian soldier who died during the spring 1918 offensives in which the Germans very nearly won the war. 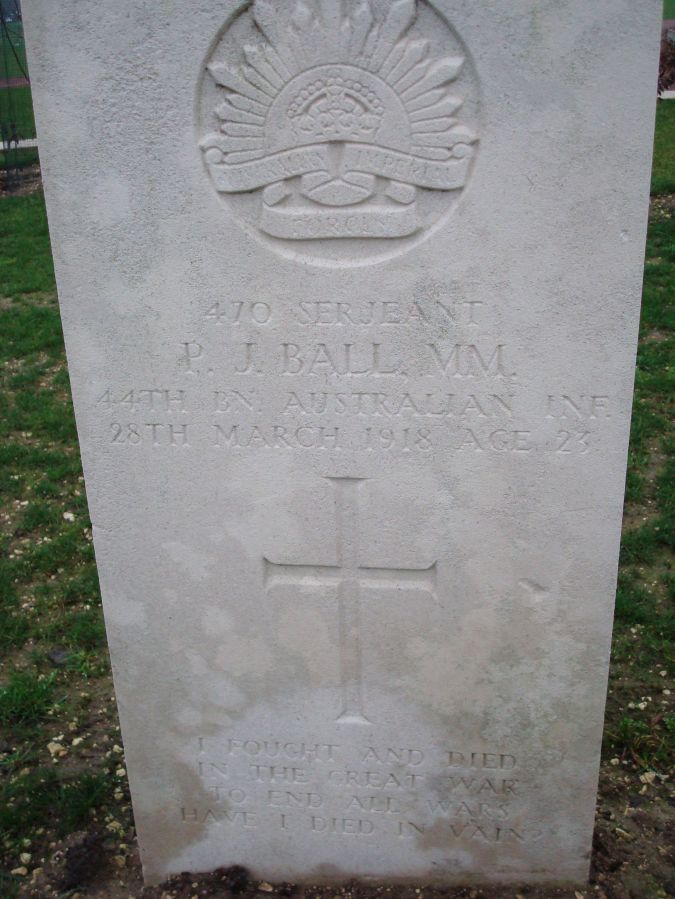 “I fought and died in the Great War to End All Wars. Have I died in vain?”

Dripping with irony, it’s a bracing, poignant example of how commemoration involving different actors with different motives makes “Lest we forget” rather complex. Australians are buried in British cemeteries, sometimes alongside British soldiers, yet World War I marked both the birth of a distinctive Australian identity and (for many soldiers) the revitalization of anti-British sentiment. So against the motives of the British and Australian governments in establishing this memorial and cemetery, we have the bitterness of one family. (And who knows what Sgt. Ball actually felt about the war?)

But far more epitaphs are patriotic in tone, and the markers in German and French military cemeteries don’t make room for any personalized statements, so the message of commemoration there may seem more tightly controlled.

When memorials are located in towns and cities, in close proximity to other constructs sharing the same public space, some remarkable juxtapositions can happen.

Above is my favorite example: the war memorial for Oxford, England. While the chapels of most (all?) colleges in that great university town have their own memorials and lists of hono(u)red dead, the town of Oxford itself erected this monument, just south of St Giles Church. The inscription reads: “In memory of those who fought and those who fell, 1914-1918.”

The words “and 1939-1945” were added to the step below to make this a memorial to the sons of Oxford who fell in both world wars. Then a further addition expanded the memorial yet more broadly to cover “all others who have given their lives in the service of their country.” It’s probably too small to be visible in the picture below (look to the left of the top step), but across the street and just behind the memorial, one will find a recruiting office for the British military.

Which might be another piece of evidence supporting Paul Fussell’s famous contention that WWI marked the triumph of irony.

But the irony is greater still, for mere steps south of the Army recruiting office and the war memorial, one comes to the local meeting house for the Society of Friends. As they did during the two world wars, English Quakers today oppose warfare. So, in the shadow of the war memorial and within shouting distance of the British Army office, there hangs this reproduction of an iconic Quaker poster:

Tomorrow: the series will continue with some reflections on the place of religion (and its absence) in the commemoration of the war.

2 thoughts on “Commemorating World War I: “Lest We Forget””