A series of posts taking you day-by-day through a proposed travel version of my course HIS230L World War I. Read the introduction to the series here, or the previous post here.

For our last day in London, students will be given semi-free rein and set loose to work on research projects by visiting a site of their choosing:

And along the way, I’m going to ask all students to visit at least a few of London’s many WWI memorials. The study of war memorials has thrived in recent years, as scholars note that the divergent ways public and private agencies responded to the impossible task of commemorating over 9 million deaths reflected the conflicted nature of Westerners at that point in the modern age.

Some memorials were unabashedly patriotic, invoking forms long used to glorify the dead and the nation they died for. Others offered similar sentiments, but in a more understated fashion. Many soon had to find space to honor the dead of a second world war.

Some were created even before the war’s end. The Imperial War Museum itself, built in 1917 on the site of a former insane asylum (insert your own “Ironically”), responded to the growing awareness that this war was a pivotal moment in history; its artifacts needed to be collected for posterity. Some memorials are much more recent; among the newest is the Australian memorial in Hyde Park, unveiled in 2003. 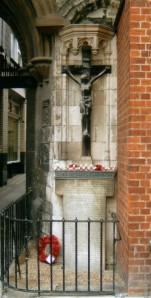 Many were explicitly religious; variations on the “Cross of Sacrifice” (designed by Sir Reginald Blomfield) tower up to thirty feet over many British war cemeteries. In place of the crucified Jesus on this memorial from a church in the City of London, Blomfield’s cross bears a bronze sword plunging from the head down to its base. Other memorials appeal to traditions (Roman, Greek, Egyptian) more ancient than Christianity.

But none is quite like the most famous and controversial of them all: the Cenotaph in Whitehall, near Westminster Abbey and the Houses of Parliament. Designed by Sir Edwin Lutyens, the Cenotaph is dedicated to “The Glorious Dead”—all of them, as it is a tomb in which no soldier is buried but any might be remembered.

Lutyens “took the form of Greek commemorative architecture but stripped it of any hint of celebration,” without “the slightest mark of Christian or contemporary patriotic or romantic symbolism, a feat which did not endear Lutyens or his work to traditional Christians,” according to historian Jay Winter.

Winter features the Cenotaph in his acclaimed study of WWI memorials, Sites of memory, sites of mourning. He ultimately praises the monument as a

work of genius largely because of its simplicity. It says so much because it says so little. It is a form on which anyone could inscribe his or her own thoughts, reveries, sadnesses. It became a place of pilgrimage, and managed to transform the commemorative landscape by making all of ‘official’ London into an imagined cemetery. (104)

(By this logic, of course, the “traditional” Christian ought not to be so worried by the lack of overtly Christian imagery. Since an inscribable thought or reverie should surely come to mind when one learns that Cenotaph comes from a Greek word meaning “empty tomb.”)

In any event, it’s worth noting that the Cenotaph has been widely copied. The United Kingdom National Inventory of War Memorials lists nearly 300 cenotaphs, not including several found in former imperial outposts like Toronto, Durban, Colombo, Singapore, and Auckland. Many of these are virtually identical to Lutyens’ original in London.

Lutyens also designed the most famous British memorial outside of the British Isles: the Thiepval Memorial to the Missing of the Somme, site of the worst British fighting on the Western Front. And it’s to the Western Front that we head when the series resumes next Monday…

2 thoughts on “The Challenge of Commemoration”