Earlier this month I attended the memorial service for Dr. Jim Johnson, who spent thirty years teaching U.S. history at Bethel. Jim retired about a decade before I arrived, and we’d only met a handful of times over the years. So I felt a bit like an interloper in a room full of his closest family, friends, and colleagues. But it was good to have so many strokes added to my mental portrait of Jim, who one close friend described as “engaged, open, enthusiastic, and outraged” — both stubborn and humane. 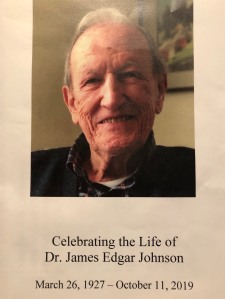 I’ve been thinking back on that service today for two reasons.

First, reminds me that today will find empty chairs at many tables. Festive as this holiday is, Thanksgiving is also a moment when many of us will feel keenly the still-new absence of a parent, grandparent, friend, co-worker, or mentor.

But precisely because Jim was one of those things to every person who spoke at his funeral, their gratitude to him reminds me of my gratitude to four groups of people:

I can start with those, like Jim, who committed almost their entire careers to building the university where I’ve spent almost all my career. As one of his former Bethel students thanked him, I looked around the crowd and saw the daughter of our longest-serving president, our former student life dean, my current dean, and several current and retired faculty. And I suddenly realized that I’m only at Bethel — I’m only the kind of professor I am — because I was hired and mentored by people that Jim had hired and mentored. The college and department that Jim’s former student described is one I still inhabit: one where professors opened vistas to other cultures, and opened their doors for continuing conversation after class.

But much as I appreciate Bethel, Jim’s service reminded me to be grateful that I’m part of an academy larger than any single institution. Thanks to the G.I. Bill, Jim had been able to get his PhD at Syracuse (coincidentally, in the same program as our most recent history hire), then after coming to Bethel, he maintained close ties with professors at the University of Minnesota. They were represented at the service by the renowned Russian historian Theo Stavrou, who paraphrased Dr. Zhivago in calling his friend one who “dissolved himself into the selves of others.” Especially in a season when work life can be tense and fraught, I’m grateful for the chance to pursue my scholarly calling alongside non-Bethel colleagues like my co-bloggers at The Anxious Bench (subjects of a long Thanksgiving Twitter thread this morning).

Third, the memory of Jim’s service prompts me to thank God for the people and mission of his church. As we heard a pastor friend and retirement home chaplain reminisce about their relationships with Jim, I recognized that I was sitting next to the organist at our former church. “I’m only here for Cindy,” he would invariably tell me when we ran into each other after worship at Salem Covenant — as if I’d caught him somewhere he shouldn’t be. But Jim was a servant of the church, not just the academy. And that’s something else that I’ve learned from my time in his former department — to be grateful to have a dual vocation.

Our calling to the church can take many forms, but like Jim (whose love of sacred music ranged from the works of Bach to the gospel tunes that a jazz band played at the memorial service), I’m as happy singing in worship as teaching or preaching. For him, that meant leading worship in spaces as large as Bethel’s Great Hall and as small as the chapel at the retirement home; for my part, I’m content to be a bit more anonymous, just one member of the choir in our new church.

Finally, and most importantly, I left Jim’s memorial grateful for family and friends. Knowing how little I’d seen of this part of his life, I was especially grateful to hear from his son, daughter, and granddaughter. But the most moving part of the whole service came when the woman who helped care for him in his last years of life shared a glimpse into their unlikely friendship. Not only did it remind me of the importance of a stage of life whose joys are measured in very different terms than status, recognition, or professional accomplishment, but the caregiver testified to Jim’s undying love for the wife for whom he had cared for many years: “Lou still lived in his heart and on the tip of his tongue.”

So as we prepare to gather around my in-laws’ table for Thanksgiving — and as I think of my own family gathering everywhere from Colorado to Virginia — I’m particularly thankful to have a few days to step away from my role as professor and scholar and just be a husband, father, brother, and son.

May God make us all truly grateful for such time with such people. And where those relationships have been suspended by death, may today awaken fond memories of time gone by. Grace and peace to you all this Thanksgiving.