As I conclude this series previewing possible future tours for Pietist Schoolman Travel, be sure to take today’s post with the biggest grain of salt. The concept is the least well-formed in my mind, both because it’s the furthest away (summer 2022) and on a topic that I’ve never taught. In fact, I’m not even sure that I should be the primary guide for this one.

Much as I read about it, I’m no expert on the American Civil War. I don’t know if I’m equipped to help Americans think seriously about the causes, course, and consequence of an event whose legacy and memory continues to shape and reshape this country.

But for that very reason, it keeps coming to mind as a possible tour — perhaps the most timely topic I could pick for one of these trips, and the one I’ve explored most on my own in recent travels. So here’s where I’m at in my preliminary thinking for a 2022 Civil War tour:

My goal has been to design something that’s no more than 7-8 days, which means keeping the range relatively limited. I could make the case that we should head as far south as Georgia and South Carolina (not just the home to Fort Sumter but to National Parks sites dedicated to Reconstruction) or as far north as New York or Boston. And I hate to continue the old pattern of neglecting the war’s western theater (I still regret that I haven’t yet toured Shiloh), but for now, the most practical option seems to be to keep to the area most closely associated with Robert E. Lee’s Army of Northern Virginia.

I’d like to start in Washington, DC… and end there. For the first day of the trip, I’d imagine using the Smithsonian’s museums of American history and especially African-American history to set the larger context for the war: not just the sectional debates preceding it, but how the Civil War is part of larger (ongoing) national debates over freedom, identity, race, the role of government, etc. To close that first segment of the tour, we’d walk over to the Lincoln Memorial to start to think about how the Civil War is remembered — and how that memory has changed over time.

Then as we return to Washington at the other end of the tour, we’d lean into the theme of memory and visit a wider array of sites: familiar spots like Arlington National Cemetery and Ford’s Theatre, but also Frederick Douglass’ house in Anacostia and the African American war memorial near Howard University (itself founded two years after the war). 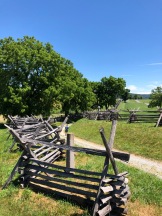 “Bloody Lane”: the sunken road that featured some of the worst fighting at Antietam

But as with the World Wars in Western Europe trip we completed last June, the heart of this one would be an extended tour of actual battlefields. Mere miles from the nation’s capital, we’d start with Bull Run, where the Confederacy won battles in July 1861 and August 1862. As we turn north towards Maryland, we’d go backward in time to 1859: the year the radical abolitionist John Brown tried to start an insurrection at Harper’s Ferry. Then it’s just a short drive north to Antietam, where Union and Confederate forces collided on September 17, 1862: the single bloodiest day in American military history.

Not even a year later, Lee’s army again tried to take the war to the North, resulting in the three-day battle of Gettysburg, Pennsylvania. Just an hour’s drive from Antietam, that extensive battlefield and its cemetery and many memorials deserve at least a full day’s attention.

The North Carolina memorial, one of the over 1,300 monuments and markers managed by the National Park Service at Gettysburg – all Gettysburg photos CC BY-SA 4.0 (Chris Gehrz)

The view from Little Round Top 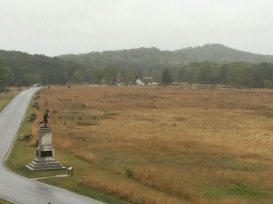 The view from the Pennsylvania state memorial, with the 1st Minnesota monument in the foreground

The Gettysburg Address memorial at the military cemetery

Before we return to Washington, we’ll head back to Virginia to focus on the final two years of the war and its complicated place in Southern memory. Whether we go by way of the Shenandoah or Fredericksburg, I’m sure we’d end up in Richmond, the capital of the Confederacy for most of the war. Not only are there multiple battlefield sites and museums, but Richmond’s Monument Avenue is a perfect place to study the myth of the “Lost Cause” and to talk about more recent controversies over what to do with Confederate memorials. Of course, Richmond has long been a cultural, intellectual, and economic center for black life, so we should take time to see sites like First African Baptist Church and maybe walk the Richmond Slave Trail.

If you’re interested in learning more about this tour as it takes clearer form — or those on sports history (2020) and Christianity and Western culture (2021) — just fill out this brief form and like our Facebook page to make sure you don’t miss any updates.

One thought on “Future Tours: The American Civil War”