It’s hard to believe that just a month ago I was touring western Europe with a bunch of world war buffs! Spending those eleven days with those twenty-three people reminded me how much I enjoy fusing my interests in history and travel. “Travelers to historic places get a fuller sense of a place and its events than those who only read or watch pictures, videos, movies about places,” one of our tripgoers wrote over the weekend. “The air we breathed, the smells of the locality, the sense of prior history with us in the same place, the interactions with the peoples of those WWI and II locations all add up to a more evocative and intense experience.” Amen!

Essex Farm Cemetery outside Ypres, Belgium, where a Canadian doctor named John McCrae wrote, “In Flanders Fields the poppies grow / Between the crosses, row on row”

Our 2019 group at the Canadian National WWI Memorial in Vimy, France

As the battle of the Somme began on July 1, 1916, German troops emerged from bunkers in this ravine 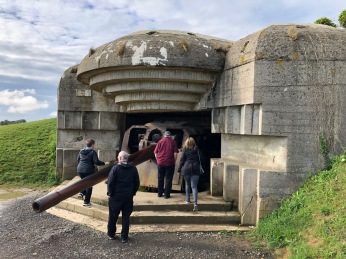 Visiting a former German artillery battery at Longues-sur-Mer, overlooking the beaches of Normandy 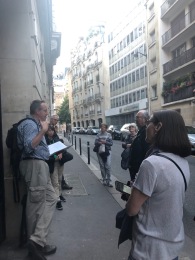 Sam leading a walking tour of Paris sites where American expat writers like Ernest Hemingway and F. Scott Fitzgerald lived and worked in the 1920s

In fact, I came back from that tour more excited than ever to start thinking about the next one! I’ve updated my Pietist Schoolman Travel page, and even floated possible topics for the next three summers. If you go over to that page, read the bare details, and are already interested, I’ll invite you to fill out this short form — so that I can follow up as plans take shape later this fall.

But if you need some convincing, I’m going to spend this week thinking out loud about each tour. We’ll start with next summer…

This can’t be much of a surprise to anyone who knows that I’m going to be teaching a course on the history and politics of sports with my Bethel colleague Chris Moore, or that he and I spent last spring podcasting our way through some topics for that course.

So what better way to celebrate the first offering of that course than to spend a week or so next summer actually tracing some of that history through at least part of the United States. Just putting together a rough draft of an itinerary has been so exciting that it’s all I can do not to publish a brochure and start taking deposits. Alas, I can’t really finalize anything until 2020 Major League Baseball schedules come out later this summer, but let’s go ahead and dream that all this will line up:

Let’s start with a bang: a Red Sox game at Fenway Park. I can’t think of a better place to start thinking about how sports have (and haven’t) changed over time than to spend time at the National Pastime’s most historic venue. Who knows, maybe we’ll even fit in a walking tour of some Boston history — or a tour of Boston Garden — before we check back in to our downtown hotel. 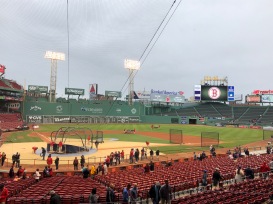 From here on out, we’ll be riding a comfortable motor coach across country, starting with a short trek to Springfield, Massachusetts, where a YMCA teacher named James Naismith invented basketball and that sport’s hall of fame is located. Then we’ll continue to Cooperstown, the charming New York village where the National Baseball Hall of Fame resides.

I’d love to add the Hockey Hall of Fame to our list — and maybe see a Blue Jays, Argonauts, or Toronto FC game while we’re in Toronto — but one way or another, our tour will take us through Canton, Ohio, home of the Pro Football Hall of Fame. And maybe we’ll have time along the way to see the Cleveland Indians, Columbus Crew, or Cincinnati Reds. (Note: my plan would be to include tickets for the opening and closing baseball games into the cost of the tour, while letting tripgoers elect any additional games on their own.)

We might see the Louisville Slugger factory while we’re in Kentucky’s largest city, but it’s also a great time to take a break from the big four team sports and enjoy Churchill Downs. Hopefully our schedule will line up with live racing; in any event, we’ll tour the stands and paddocks as part of our visit to the Kentucky Derby Museum.

From Louisville, it’s not far to Indianapolis, where we can spend the morning at the city’s iconic Motor Speedway, the afternoon at the NCAA Hall of Champions, and maybe the evening watching the WNBA’s Fever at their renovated field house.

If we start at the American League’s oldest ballpark, we’ve simply got to finish at the Senior Circuit’s most venerable venue: Wrigley Field. That also leaves us in a nicely central point for flights home the next morning.

Again, this is all just thinking out loud at this point. But it sure sounds great to me. If it sounds that way to you, just fill out this form to get on our mailing list. Or wait to read my previews of our tentative 2021 (tomorrow) and 2022 (Wednesday or Thursday) tours first.

One thought on “Future Tours: Sports in American History”