Today I’m happy to announce the debut of The 252, a new weekly podcast from Chris Moore, Sam Mulberry, and me. 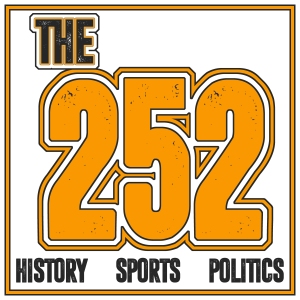 As you may recall from my post earlier in the week, Chris and I are developing a new general education course at Bethel University: HIS/POS252L History and Politics of Sports. While not a field of expertise for either of us, sports history does give us the chance to help students look at some crucial issues in America and beyond from a different vantage point.

We’ve got a year until the course itself begins, so we’re using this podcast to think out loud about HIS/POS252L. (In that sense, The 252 is akin to the second season of The Pietist Schoolman Podcast, in which Sam helped Mark Pattie and me think our way through the book we were about to write.) Eventually, we’ll start interviewing people who study, play, coach, and cover sports. But for today’s preview episode, we simply talked amongst ourselves about the biggest sport in 21st century America: pro football.

On the eve of Super Bowl LIII, we looked back at how much had changed in the NFL since Super Bowl I. And we inaugurated our first recurring bit on The 252, placing three people on “The Mount Rushmore of NFL History”: players Jim Brown and Tom Brady and coach/executive Paul Brown.

Here’s where you get to join the fun. We had each nominated two or three more possibilities, and now leave the 4th member of our NFL Mount Rushmore to our listeners. Vote early and often in the poll below — we’ll announce the results when our regular season begins next Wednesday.

You can download or stream The 252 at the Live from AC 2nd podcast network. Subscribe to that network or follow it on Facebook to make sure you never miss an episode of The 252, Election Shock Therapy, Nothing Rhymes with Gehrz, and Live from AC 2nd itself.