On the last full day of our January travel course on World War I, we take our students to Munich’s modern art museum and ask them to write about whichever work best reflects what’s on their minds at the end of three weeks of studying total war and genocide. If I’d completed that assignment myself, I would have selected this 1922 painting by Max Ernst, Die Ruine (The Ruin).

I haven’t been able to find much commentary on this particular work, but knowing that Ernst was drafted into the German Army during WWI tempts certain interpretations. (“On the first of August 1914 M.E. died,” Ernst claimed of his experience of the Great War, “He was resurrected on the eleventh of November 1918.”) It’s hard to look at the painting’s structures and not be reminded of the concrete-and-steel bunkers whose ruins still trace the 440-mile line that the Germans called the “Western Front.”

Ernst’s ruin also sent my imagination forward in time, to a later memorial to German militarism: the pieces of Hitler’s Atlantic Wall that we saw on the Normandy bluffs overlooking the beaches where Allied troops landed in June 1944. 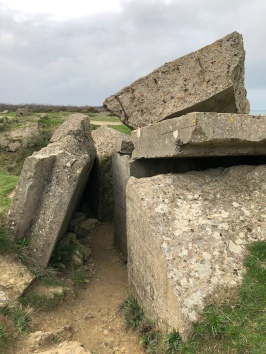 Though it’s the rubble of rough concrete rather than smooth marble, those ruins of the Third Reich couldn’t help but echo the ruins of older empires. Was it just a historian’s overactive imagination that saw the contours of an Greco-Roman ampitheater in the half-circle of a former artillery battery?

“Look on my Works, ye Mighty, and despair!”, my memory murmured as I paced the Wehrmacht’s positions at Pointe du Huc. “Nothing beside remains.” But it’s not just the Nazi empire that left behind “lifeless things” at Normandy. Stepping onto Gold Beach at low tide, we saw what’s left of the Anglo-American temporary harbors that funneled millions of men and their supplies into total war. The conclusion of Shelley’s poem came to mind:

Round the decay
Of that colossal Wreck, boundless and bare
The lone and level sands stretch far away.

Fragments of what the British called “Port Winston,” in honor of the prime minister who suggested the temporary harbors

Pairs of students walking Gold Beach, with more bits of the Mulberry B Harbour in the distance

Part of what makes the battlefield segment of our tour so powerful is the way that these ugly artifacts are simply left where they are. In Flanders and Normandy, the ruins of war remain… but are imperceptibly, inevitably yielding to wind, tide, and other natural forces more patiently relentless than the human hubris that built them. It’s a striking contrast to the way we saw the ruins of older ambitions enshrined in the museums of London and Paris.

Part of the Amazon frieze at the Mausoleum at Halicarnassus, an ancient wonder of the world now preserved (in fragments) at the British Museum

What’s left of a statue of King Louis XIV, relocated from Versailles to the Louvre

And in the city where Ernst’s painting hangs, there are few ruins left to find at all. Devastated by Allied bombing during WWII, Munich was simply rebuilt. (Save the foundation of the former Nazi Party headquarters, overgrown next to the city’s brilliant new N.S. documentation centre.) It’s an understandable response to devastation, but one that obscures the ravages of history.

Most of all, the pink mass in the foreground of Ernst’s painting reminded me that both world wars left behind human ruins: the rubble of flesh and spirit. “Here died a myriad,” wrote Ezra Pound in 1920, “For a botched civilization… / For two gross of broken statues, / For a few thousand battered books.” Two years Pound’s friend T. S. Eliot looked out at the “Unreal city” that was postwar London: “I had not thought death had undone so many.”

For the most part, it proved all too easy for the civilian population to ignore such ruins, or to consign them to the care of political extremists like Lenin, Mussolini, and Hitler.

But there were still attempts at healing and reconstruction, as two very different busts reminded me. First, I came across a 1918 model at the National Army Museum in London: a training device for plastic surgeons preparing to reconstruct shrapnel-mutilated faces. Then hours later, at the Tate Britain, I saw a 1956 sculpture by Eduardo Paolozzi, who deliberately shattered a clay and wax bust, then pieced the fragments together in bronze.

“Here,” explained the Tate curator, in words that sum up much of our experience of Europe, “the theme of destruction is balanced by the sense of survival and adaptability suggested by the act of repair.”