Over the past couple of years, I’ve been happy to cheer on fellow Covenanters Mark Safstrom and Michelle Clifton-Soderstrom as they worked with filmmaker Tim Frakes on a documentary entitled God’s Glory, Neighbor’s Good: The Story of Pietism. Here are a couple of short clips, from filming at the Hauge Museum in Norway and at the Copenhagen church dedicated to the memory of Nikolaj Grundtvig:

Michelle and Mark screened a rough cut of the documentary at last December’s Pietism colloquium at Bethel University, then it debuted last month at North Park University in Chicago.

Now, if you subscribe to Amazon Prime, it’s streaming for free! 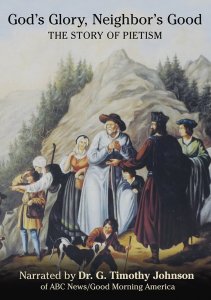 (At least according to Amazon, it stars Michelle and someone named “Christian Collins” — which I can only assume is the stage name of one of my distinguished colleagues at Bethel University.)

“Pietism,” says Michelle early in the film, “is a way to connect with what I would call your good and noble grandparent…. Pietism can help us do some of the things that evangelicals hope they can do and be today, which is for social justice, which is for reading scripture, which is for biblical literacy and having a religion that takes root in who we are as a people and how we live, move, and witness in the world.” If you watch the film and come to feel the same way, let me make bold to recommend that you not only read historically oriented books like those by Michelle, Mark, and Christian, but the 21st century case for Pietism that InterVarsity Press will publish this September.