After a flurry of posts in late January and early February, I scaled back my own blogging this week in order to work on my North Park talk next Tuesday. Just two posts: one on the silencing of conservative Christian critics of Donald Trump by their own organizations, and the other on what it means that the Bible is “an altar where we meeting the living God.” Elsewhere on the Internet…

• There were plenty of bizarre moments from Donald Trump’s first press conference that should any reasonable observer.

But Peter Beinart was especially bothered by the president’s non-response to a question about rising anti-Semitism: “The best way to understand it is as the product of narcissism so epic that it crowds out moral concern. [Reporter Jake] Turx asked about Jewish fears of anti-Semitism. But the only thing that interested Trump was the possibility that people might consider him anti-Semitic. So he turned a question about Jewish victimization into a parable of his own victimization by a Jewish reporter.”

• My university issued a statement on immigration and refugees: “As a university founded by immigrants and rooted in the teaching of the Bible, we are committed to living out the biblical mandate to love our neighbors as ourselves, and we understand our neighbors to include ‘the stranger’ and vulnerable in our world… Bethel University has advocated for fair and just immigration laws and special care for ‘the stranger’ among us in multiple ways.”

• Because of the renewed focus on immigration, you’ve probably seen people quote the Emma Lazarus poem inscribed on the Statue of Liberty. But what was its original context? “By returning to the late nineteenth century,” wrote Ryan Poll, “we can recognize the poem as a form of political art at a time when nationalist xenophobia reigned against a different immigrant group.” 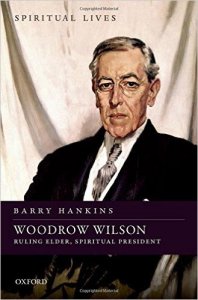 • Thanks to his apocalyptic landscapes of the Western Front, Paul Nash is one of the most influential artists of World War I. Learn more from this review of the special Nash exhibition at the Tate Britain (where our WWI students spent an afternoon last month).

• John Turner reviewed Robert Orsi’s book History and Presence, in which Orsi argues that the study of religion “ought to be the study of what human beings do to, for, and against the gods really present … and what the gods really present do to, for, and against humans.” (More more on Orsi’s attempt to bring the supernatural into religious history, see series by John Fea and The Juvenile Instructor.)

• Religious imagery and language were everywhere in Sunday’s Grammy awards, starting with Chance the Rapper claiming the Best New Artist award “in the name of the Lord.”

• For all the reasons Jacob Lupfer articulates, offering “glitter ashes” on Ash Wednesday seems like a terrible idea.

• While we’re all waiting to hear what I say at North Park about Pietism and evangelicalism, consider former NP professor Scot McKnight’s diagnosis of the problems with the latter movement.

• Since the Obergefell decision caused Christian colleges to fear that their stance on sexuality could cost them their tax-exempt status as nonprofit organizations, the case of Bob Jones University (which lost that status for its ban on interracial dating) has often come up. This week, BJU announced that it would regain its nonprofit standing.

• There’s been a lot of speculation that the new administration will loosen Obama era regulation of for-profit higher ed. But in the meantime, enrollment declines at the University of Phoenix forced it to lay off about 170 full-time faculty members.

• New secretary of education Betsy DeVos says that she’d be fine “to have worked myself out of a job,” and that she and Trump agree that more college students would be better served by vocational training.

• “If history is any guide,” wrote Chronicle of Higher Education reporter Kelly Field, DeVos’ “influence may end up being more limited than her critics fear. Most education secretaries, after all, have left a limited mark on higher education.” (subscription required)

• Of course, DeVos is better known for her support of school choice at the K-12 level. In a guest post at The Anxious Bench, Rusty Hawkins offered some historical context for the causes and costs of Americans opting out of public education in favor of private religious schools.