Part two of my attempt to curate some of what I read while traveling this month. Yesterday I focused on Christianity; today, articles and blog posts about history and education. 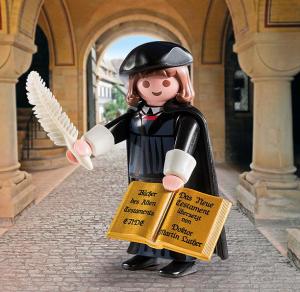 • Now that we’re in the year 2017, the floodgates have opened on pieces about the 500th anniversary of the Protestant Reformation. Among many others writing on this topic… Mark Silk reported that Playmobil’s popular Martin Luther figurine is reviving discussion of the reformer’s anti-Semitism… Roger Olson asked who were the “first Protestants” and wondered if the Reformation (and the Catholic/Protestant split) still mattered… Wes Granberg-Michaelson argued that the anniversary called for as much repentance as celebration.

• I ended up not placing the Hamilton soundtrack on the reading list for my Intro to History class, but American historians are adding it to their courses.

• Before leaving office, Pres. Obama designated a national monument to Reconstruction. Two historians who advocated for that site explained its significance.

• On Tuesday my Anxious Bench post will consider whether it’s becoming more appropriate to consider analogies between Donald Trump and the European fascists of the 1920s and 1930s. But meanwhile, here’s a comparison with populist authoritarians of more recent global history.

• Other highlights from the month at The Anxious Bench: my colleague Amy Poppinga reflected on teaching the history of Islam as a Christian scholar; Beth Allison Barr told the story of one of the most remarkable women of the 15th century; and Philip Jenkins contemplated the historical value of counterfactual analysis.

• Are we witnessing the beginning of the end of European unity?

• It’s not a field I engage in very much, but oral historians got some big news about IRB oversight.

• I can’t remember a Secretary of Education nominee getting as much attention as Betsy DeVos, with some of her fellow Christians concerned about her views on public education.

• While the hubbub around DeVos has focused on K-12 education (because of her advocacy for charter schools), it’s still unclear what the Trump presidency will mean for higher ed.

• DeVos graduated from Calvin College, where more than a hundred professors (including one of my Anxious Bench colleagues and other fellow members of the Conference on Faith and History) wrote to the student newspaper in order to voluntarily place themselves on the so-called Professor Watchlist (which monitors professors “who discriminate against conservative students and advance leftist propaganda in the classroom”).

• More and more Americans are considering spending their college years north of the border.

• A private college in New Hampshire thinks that it can teach the liberal arts without having majors in English or philosophy.

• At least at Northwestern University, it doesn’t sound like history and other humanities are going anywhere.

• That’s a good thing for those students, since a new study finds that such an education not only fosters lifelong learning, but leadership, altruism, and (yes) financial success.

• Another study contradicts the stereotype of miserable, embattled conservative professors on liberal campuses.

• As readers may recall, I go back and forth on the value of using Twitter. But if you’re an academic looking to utilize that social medium, here are some things to think about.

• The idea of “design thinking” sounds wonderful, but having been part of such processes, I can see where Joshua Kim’s critique is coming from.