I don’t regret participating in our national angsting over the presidential election, but I can’t say it’s been much fun. So before diving back into that mess, I thought I’d toss off something vastly less serious: a few of the things in life — other than my family — that I’m currently enjoying.

Or, a few reasons to think that America — for all its many faults — is actually pretty great already.

I’ve mentioned this to y’all, right? I mean, I tell anyone I meet in person. Surely, I do the same with my virtual relationships.

Then you need to be watching my favorite show on television: the still-unfolding story of Vivian Howard, who moved to New York, studied as a chef, married an artist named Ben, then moved back to the place where she grew up to raise twins and run a farm-to-table restaurant that highlights the seasonal produce and regional specialties of eastern North Carolina.

Now, I couldn’t quite justify spending forty bucks on the beautifully illustrated cookbook that she spent all of Season 3 writing. There’s only so much I can do with muscadines, field peas, and Tom Thumbs up in Minnesota. Plus I needed that money to buy myself a different birthday present. (See below.)

But the Peabody-winning show is still free, and as educational and entertaining as ever. Vivian is smart, curious, goofy, blunt, self-doubting, and principled — as well-rounded and compelling a character as you’ll find. And she’s supported by lovable locals like farmer Warren Brothers and his irascible cook, Miss Lilly.

Plus, the Avett Brothers! Who provide the theme song and have appeared in two episodes so far. And speaking of North Carolina favorites…

The only other red liquid I know that tastes like cherry is cough syrup. And yet… 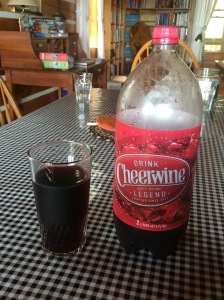 Cheerwine is caffeinated, delicious, and only sold in and around North Carolina. So you get to feel virtuous about defying the Coke/Pepsi duopoly when you visit the pop section.

No, I wouldn’t spend forty books on a cookbook. But if you read my recent post on Lin-Manuel Miranda’s Tony-winning sensation, you’re not at all surprised that I would spend that much money on Hamilton: The Revolution, Being the Complete Libretto of the Broadway Musical, with a True Account of Its Creation, and Concise Remarks on Hip-Hop, the Power of Stories, and the New America.

Several readers had recommended it, and it’s definitely worth the outlay. In addition to Miranda’s annotated lyrics, you get Jeremy McCarter’s history of the show. Most intriguingly, McCarter argues that Hamilton “draws from the breadth of America’s culture and shows its audience what we share doesn’t just dramatize Hamilton’s revolution: it continues it.” For example, he muses about the potential impact once the musical is finally licensed for high school and college productions:

What will it mean when thousands of students step into these roles at age 15 or 18 or 20—roles that have changed the lives of the original cast members, who encountered them at a significantly later age? Leslie [Odom, Jr., who plays Aaron Burr] says that playing a Founding Father has made him feel newly invested in the country’s origins, something that always seemed remote from his life as a black man in America…

We got our Pulitzer Prizes tonight.
Does this NOT look like exactly the sort of hang where The Joker and his crew would terrorize Gotham? pic.twitter.com/7V1siapNLA

Oh, and Lin-Manuel Miranda’s Twitter account is also pretty terrific. Once, my current favorite American paid homage to my favorite rock band and I hit the keyboard ten times before remembering you can only like a tweet once.

I. Am trying. To break your heart. #Chicago pic.twitter.com/XZO6ttOgJR

Well, not the non-competitive blowouts in the junior circuit. Change that to…

Even after years of interleague play, I still pay most of my attention to the league where my Twins (reputedly) play baseball. So I always look forward to seeing the likes of Clayton Kershaw, Madison Bumgarner, and Jake Arrieta pitch more than a single semi-meaningful inning of the All-Star Game. And if you can’t enjoy the nail-biters that the NL has provided thus far — from Bumgarner’s heroic performance in the wild card game to the Cubs testing the pulses of their diehards to Kershaw coming back on a day’s rest to keep Bryce Harper from scoring the tying run in a decisive game — then you’ll just never like baseball.

But even so, there’s something here that gives me even more joy:

My least reasonable, guiltiest pleasure is the sight of lavishly paid pitchers having to hit. In youth ball, pitchers are usually the best athletes, so I expect that most of these guys used to average north of .500 for their high school team. But having been sucked into the hyperspecialization of modern-day sports, those skills atrophy terribly — just in time for them to make The Show and attempt to hit a round ball with a round bat in front of 40,000 people.

And when they actually do make contact, it makes me think — for a fraction of a moment — that if they can do it, maybe I’m not that far away myself. So to see Arrieta and Cubs reliever Travis Wood go deep in back-to-back games, or Kershaw lace a double and draw a walk in the same game, or Bumgarner get a chance to pinch hit…