Okay, let’s confront the truth: Today is not just any birthday. Today I finally turn 40.

So, 40. Let’s not make it more than it is. You’re under no obligation to get me anything. None whatsoever.

This blog was a big part of my (late) thirties. So maybe join me in reading one or two of my forty favorite posts. Call it, 40 for 40.

All is Calm: The Christmas Truce of 1914: “The story of the Christmas Truce, and the place of soccer within it, is unlikely to be fully recovered, despite our best efforts. But… history — despite its limitations — remains ‘necessary.'” (12/22/2014)

Alyce’s Song: Reflections on a Funeral: “…there is a cross, under whose shadow the dying gather to grieve the dead, and, by celebrating a life that was, testify to the life that is in Christ.” (2/12/2015)

A Benediction for the Class of 2013: “So as we stand on the verge of years and miles that will inevitably separate us and stretch affection into longing, I pray that your education will continue…” (5/27/2013)

Birmingham Revolution: Not Everyone’s a Prophet: “Most of us aren’t like Jonah, sent out to ‘cry out against’ cities whose ‘wickedness has come up before [the Lord]’…. At our best, we’re more like the people of one such place, Nineveh, who ‘listened, and trusted God'” (8/15/2014)

The Christian Liberal Arts as Tolkienesque Quest: “…if we were to be completely honest with our prospective students and their nervous parents, we would tell them that we can’t guarantee they’ll get anything tangible, fungible, or salable out of the education we offer. Or even that they’ll come out of it spiritually unscathed. But they will not be the same. That we can promise.” (9/25/2013)

Christians, Patriotism, and Nationalism: “…think on its words as they take communion: the sacrament that unifies the church across all national borders and proclaims that all of our lives belong to a Lord who commanded no armies, waved no flag, and died at the hands of an empire.” (7/4/2013)

Commencement: A Tribute to G.W. Carlson: “It’s an odd kind of celebrity: to be so well known to thousands of people that your mere initials conjure instant recognition and appreciation, while being so little known beyond that community… that it would take me considerable time to even begin to describe him to anyone else.” (5/25/2012)

“Do college professors work hard enough?”: “Need I point out that paying Bethel for my teaching, advising, mentoring, etc. is not like paying Wal-Mart for a box of Ho Hos or a bottle of Pepto Bismol?” (3/26/2012)

For My Children, On Their First Day of Kindergarten: “…on top of of all the ways that I hope you grow and develop and change, I hope that, in equally important ways, you stay the same.” (9/9/2015)

“GehrBerr,” or On Teaching as Collaboration: “We’re all strapped for time, but I don’t think you can be a collaborative teacher if you don’t start the week being comfortable with the fact that several hours will disappear unexpectedly into conversations with collaborators.” (5/28/2014)

“God Made the Country”: “…perhaps there’s just a hint of Eden in the countryside, an echo of our innocence that reminds us of a time when God Himself walked this world ‘in the cool of the day.'” (9/1/2011)

A Hopeful Vision for Christian Higher Education: “At its best, a Christ-centered university like Bethel is not a garrison of defenders of the faith, preparing for battle in the safety of their citadel; it’s a community of people serving faithfully, fearlessly in contested territory, building bridges, healing wounds, and inviting their enemies to turn towards the Prince of Peace.” (8/16/2015)

House of Cards: “But if West Wing was a fantasy of idealism, House of Cards is a fantasy of nihilism. It has almost nothing insightful to say about this universe except to remind us that, from time to time, we enjoy escaping from it.” (3/26/2013)

An Imposition: “…Ash Wednesday reminds us to turn around from our busy, self-centered lives, and look back over space and time to see Cavalry at a distance, the Cross a speck on the horizon, no bigger than its ashy silhouette we bear.” (2/23/2012)

J. Hawk: “I don’t know how infant memory works, but I hope that our children have some glimmer of recollection of Jim Hawkinson, who so dearly loved to see young ones toddling around the church on a Sunday morning.” (7/24/2011) 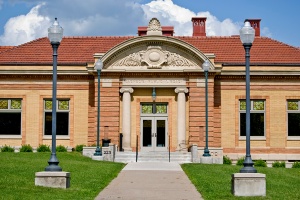 “Just One More Miracle…”: “…perhaps a flicker of hope remained as her memory reached back just a few years, to the wedding in Cana that she and he had attended. Jesus had turned water to wine back then, when his ‘hour had not yet come’; now that the hour had arrived, was not a greater miracle possible?” (3/30/2013)

Live (and Sing) in Harmony with One Another: “There are few people in the history of the world whom I respect more than the late Dietrich Bonhoeffer. But even he was bound to be very, very wrong about something…” (3/14/2012)

The Love of Libraries: “As I’ve pulled books off shelves (sometimes, best of all, at random) and read about history and mythology and poetry and math, the world has fallen away and I’ve entered imagination as pure as I’ve known.” (4/25/2013)

North Korea and a Christian View of Time: “…the very fact that we take time zones for granted — and snicker nervously at crazy-scary dictators who deviate from accepted practice — should at least remind modern Christians how little thought we give to time, which is, after all, one of the central features of Creation.” (8/10/2015)

An Open Letter to My Bearded Self: “…even if you somehow get through customs without being mistaken for a Dutch hashish importer, your wife will take one look at you coming into baggage claim and head for the parking lot. You’ll spend the night at an airport hotel eating airplane pretzels for supper and wondering where it all went wrong.” (12/21/2012)

Pietism as Instincts, or It’s More Than Old Churches in Rural Iowa: “…prior to any attempt to make theological sense of God, we experience life in, with, through, under, and for Him.” (7/14/2015)

The Purpose of the Liberal Arts is Purpose: “…the terrible temptation of an instrumental approach… is that it deceives young people into thinking that higher education is something to be planned, rather than something to be experienced.” (1/28/2014)

Sherlock!: “Historians often ask each other when and where in the past they’d most like to time-travel; my own answer is the London of Sherlock Holmes.” (12/5/2011)

Surprised by Oxford: Eastertide and After: “We don’t use the word ‘mercies’ often enough in our culture or our churches, but these were mercies indeed.” (10/26/2011)

There’s No Crying in History: Teaching the Holocaust: “We should feel, and deeply, about the injustice, loss, suffering, pain, pleasure, joy, and triumphs experienced by the people we encounter. But in some of the darkest of those moments, I’m very conscious how easy it is for even a minimally gifted teacher to manipulate the emotions of students.” (11/29/2011)

“Thick Darkness”: An Epiphany Meditation on Teaching WWII: “Make no mistake: World War II is not a ‘good’ war. Never have so many suffered so much in so few years.” (1/6/2014)

The Time for a (Long Overdue) Evangelical Conversation on Sexuality: “A real conversation. Not the silent one that many of us have within our divided consciences, kept from public view for fear of judgment. Not the false one that plays out on blogs and cable news shows, whose disembodied combatants are committed only to winning arguments and gaining readers/viewers, not building communities.” (6/10/2015)

The Vocation of a Christian Historian: Profession vs. Calling: “If we want recognition and status, tenure and promotion, we are tempted to silence the voices of gladness and need and force ourselves to churn out articles and monographs — sometimes joylessly, and knowing that the primary need being served is that of our own ambition.” (2/20/2013)

We Take Care of Our Own: Standing with John Fea: “Both for the sake of the Republic… and for the purposes of Christian higher education… Messiah (and Bethel) ought to be inviting such speakers to campus, and John ought to be studying the relationship between faith and politics in the 18th century and, where he feels that comparisons are appropriate, in the present day.” (2/22/2012)

“What Child Is This?”: “…when the angels returned to the realms of glory and the shepherds to their fields, Mary and Joseph still had a child to parent.” (12/26/2011)

What Does It Mean to Be Midwestern? (A Post-Letterman Question): “Overlookedness is a central grievance of those of us who inhabit ‘fly over country,’ a region whose largest urban area is known as the ‘Second City.’ But being the center of attention is one of the greatest temptations for the Midwestern soul — and if the cost of being noticed so intensely is lifelong affectation…” (5/21/2015)

What Is Good Teaching?: “While it’s entertaining when done well, a lecture is more than an entertainment. It tells truth: not like a geometric proof does, or a scholarly monograph does, but like a Shakespearean monologue or a Chopin piano recital does — inviting a response from the audience that goes deeper than cognition.” (6/20/2013)

What We Mean When We Say We Want Christian Unity: “From his own experience, Paul understood that Christian unity brings together strong-willed people who carry relational baggage and don’t always agree even on important doctrines.” (8/26/2015)

When I’m a “Functional Atheist”: “For someone who so often proclaims hope his favorite Pauline virtue, it’s shocking to realize how often I act as if the only future open to my college, my church, my family, and myself is the one that I can bring about by my efforts in accordance with my vision.” (4/29/2014)

“Where Are the War Poets?” WWII in Verse: “But poetry was written… by soldiers and observers trying simply to find some way to express the inexpressible about a war more violent than anything humans had ever experienced.” (9/5/2013)

Which One Game in Baseball History Would You Go Back in Time to See?: “There have been better single-game performances in the history of baseball, but none that I’d so desperately love to see again — to forget, if only for a moment or two, all that happened in the last decade of his life, and to remember what I knew as a child: that baseball is the best game invented, and that no one has ever played it with as much joy as Kirby Puckett.” (9/7/2012)

Why I’m Almost a Lutheran: “…being married to a Lutheran helps me understand why our own worship services run substantial risks by not including confession of sin.” (12/11/2013)