I didn’t quite watch the first season of House of Cards in one binge, but I’m sure the fact that I made it through all thirteen episodes in about a week registered on some computer at the headquarters of NetFlix, the TV and movie-streaming service gambling not only that it could produce its own programming, but that releasing it all at once would work better than parceling it out week by week.

I’m as surprised by anyone that I got sucked in so completely. While the original British series of which this is a remake remains one of my favorite TV programs of all time, this version pretty quickly distanced itself from its origins. There’s a nod in the pilot episode when antihero Francis Underwood (the South Carolina legislator played by Kevin Spacey) offers his own version of the catch phrase of British politico Francis Urquhart (Ian Richardson): “You might very well think that. I couldn’t possibly comment.” But as quick as a Spacey wink, it’s gone, never to return. 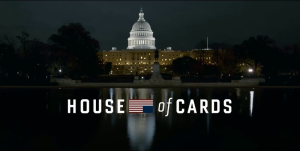 I think the makers of the American House of Cards have convinced themselves that they’re telling a much more honest story of power more naturalistically. (See creator Beau Willimon’s interview with U.S. News.) But that’s hard to believe if only because the plotting of this House of Cards is so frequently ridiculous, with the first season finale typical: the police cover-up at the center of the conspiracy unravels in barely a minute of screentime under the slight pressure of a reporter checking with a department source.

Still, there’s a deeper flaw: the original knew it was an entertainment; the latter thinks it’s something more.

Here I think that critic Tom Carson has it nailed:

What stops me from flipping for House of Cards outright is how often the show’s idea of high-stakes D.C. intrigue—its subject, after all—is less clever and more hackneyed than it thinks it is. Yet that would bother me less if verisimilitude wasn’t the series’ most wrongheaded calling card. One reason I liked the BBC original was that nobody watching was under any illusion it was a realistic portrait of Parliament’s workings; it was a deliberate, fun exaggeration, from Ian Richardson’s silky malice in the leading role on down. There’s an unresolved tension in the remake between the heightened melodrama most fans probably get off on and the solemn—and increasingly untenable—pretense that we’re just seeing how Washington inside baseball really works.

In the end, House of Cards has only the appearance of realism. It practically begs to be compared with the last TV show to draw significant viewer attention to the machinations of Washington, The West Wing, thinking that it will come off as more courageous: unafraid to show that power, even in a democracy, is still power, restrained by no law or principle except its own protection and expansion. But if West Wing was a fantasy of idealism, House of Cards is a fantasy of nihilism. It has almost nothing insightful to say about this universe except to remind us that, from time to time, we enjoy escaping from it. 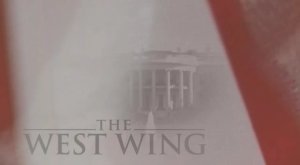 West Wing worked because the noble ideals were hard-won: characters actually had to choose between greater and lesser goods and wrestle with inconvenient things like consciences. Its world was idealized, but recognizable. House of Cards, on the other hand, constructs a world in which no moral compass functions and all characters use all other characters as means to ends — ends that haven’t yet and never will materialize (since, unlike the British version, the American one will need to string us out over the course of dozens of money-making episodes). So we’re left with characters using other characters for our amusement: an empty spectacle.

And, in the end, we in the audience ought to recognize that we’re being used as well.

The pivotal scene of the Cards finale — halfway through the episode — places Underwood (not for the first time) in a church, speaking the following lines:

Every time I’ve spoken to you, you’ve never spoken back. Although given our mutual disdain, I can’t blame you for the silent treatment. Perhaps I’m speaking to the wrong audience. [looks down] Can you hear me? Are you even capable of language, or do you only understand depravity?…

There is no solace above or below, only us: small, solitary, striving, battling one another. I pray to myself, for myself.

It can’t but evoke memories of the most powerful moment in the run of The West Wing. After the death of a beloved aide, killed by a drunk driver, the devoutly Catholic president Jed Bartlet stands alone in a cathedral and rails at God in English and Latin. As you compare the two scenes, note that one of these two fictional politicians calls the Almighty a “vindictive son of a bitch” and a “feckless thug”; the other is played by Kevin Spacey.

The Bartlet speech, though as stylized as everything Aaron Sorkin writes, is entirely believable. It’s a complex response grounded in story and character that strikes a chord with every viewer who’s ever wrestled with faith in a God whose thoughts are not our thoughts, whose ways are not our ways. It’s a prayer by someone who believes — as we Christians are about to be reminded on Friday — in a Son who prays to his Father from the Cross to ask why he had forsaken him, quoting Scripture itself. It’s one of the most convincing portrayals of Christianity I’ve seen on a TV screen.

Then there’s the Underwood “prayer” (“to myself, for myself”). It could not have been spoken by anyone who exists in time and space; neither Hitler nor Stalin could have said such words with a straight face. Worse, it reveals nothing new about the character and serves no purpose in advancing the story. It could have been dropped into any episode and seems to have landed in the season finale simply because it’s one of the last ways we can be shocked by a character who’s already demonstrated himself to be capable of anything.

And because of the sly skill of Kevin Spacey and his character’s occasional habit of breaking the “fourth wall,” it’s entirely possible to read the entire scene as being directed not at God (or Satan), but us: “Every time I’ve spoken to you, you’ve never spoken back. Although given our mutual disdain, I can’t blame you for the silent treatment. Perhaps I’m speaking to the wrong audience.”

One thought on “House of Cards”