There are few people in the history of the world whom I respect more than the late Dietrich Bonhoeffer. But even he was bound to be very, very wrong about something: 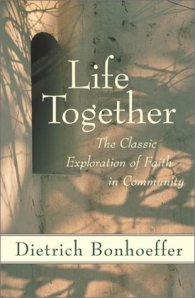 Because it is bound wholly to the Word, the singing of the congregation, especially of the family congregation, is essentially singing in unison. Here words and music combine in a unique way. The soaring tone of unison singing finds its sole and essential support in the words that are sung and therefore does not need the musical support of other voices.

…The purity of unison singing, unaffected by alien motives of musical techniques, the clarity, unspoiled by the attempt to give musical art an autonomy of its own apart from the words, the simplicity and frugality, the humaneness and warmth of this way of singing is the essence of all congregational singing…. This is singing from the heart, singing to the Lord, singing the Word: this is singing in unity….

Unison singing, difficult as it is, is less of a musical than a spiritual matter. Only where everybody in the group is disposed to an attitude of worship and discipline can unison singing, even though it may lack much musically, give us the joy that is peculiar to it alone. (Life Together, pp. 59-60)

I’ll admit that the sound of unisonality can be wonderful. And it has a long and distinguished history in the Church.

But so does congregational singing in harmony! Just in the history of Bonhoeffer’s Protestantism…

Calvin may have forbidden it (and instrumental accompaniment) in his quest for “simple and pure singing of the divine praises,” but Luther’s first hymnbook (Neue geistliche Gesänge, 1523) had four parts. Andrew Wilson-Dickson, in his The Story of Christian Music, notes that, unlikely as it may sound to us, “in Luther’s time students would gather round a table to sing in harmony from part-books just for amusement” (p. 62 — the preceding Calvin quotation comes from p. 65). And while at the beginning of the 18th century, the “Golden Age of Hymns,” few ordinary Anglicans were skilled enough to sing the works of Isaac Watts in harmony, this began to change thanks to the influence of John and Charles Wesley and the Methodist movement, which not only insisted on making hymnody more accessible to laypeople, but invested in teaching singing. As a result, in Methodist chapels, it became more and more common to hear antiphonal and harmony singing, even without instrumental accompaniment. Even without much training, the “shape note” singers of the Sacred Harp tradition threw themselves into an unpolished, gloriously loud form of harmony. And it beggars belief that Bonhoeffer — so famously taken with gospel music and shaped by his experiences at Abyssinian Baptist Church in Harlem — would have looked down upon the complexities of African-American religious music.

Beyond such history… I find nothing less essential about a group of people combining their voices in four parts than the same group seeking to stick together on one line of music. Indeed, its my chief lament about contemporary music: while praise leaders may engage in two, three, or four-part harmony, there is no hymnal or organ to guide such singing, and few other sources (aside from the collegiate choral tradition, so well-established in the Midwest but less so elsewhere in the country) to teach ordinary worshipers how to sing in this way.

Now, I sang in two choirs all four years of high school, and then in our church’s Sanctuary Choir and Men’s Ensemble for several years before childbearing complicated our Wednesday night and Sunday morning schedules. And I have a tenor range high enough that I can usually step up to the third above the melody line on most contemporary praise choruses. But I’m not much of an improviser, and I miss singing my part (and hearing the alto and bass from others) in a full arrangement guided by hymnal, choir, and/or organ.

I was thinking about this all last Sunday during our contemporary worship service, wondering, “What do I miss (and what did Bonhoeffer fail to understand) about congregations singing in harmony?”

I’d love to hear others weigh in (and, believe me, this post will testify to the wisdom that a little knowledge is a dangerous thing), but three responses came to mind:

Beauty as a theological theme has not exactly been a strength of the Protestant tradition; we’re more accustomed to suspicion of lovely things and those who create them. But fortunately the Lutheran wing of the Reformation retained enough of Luther’s appreciation for the rich culture of the Late Middle Ages to yield hymns like Philipp Nicolai’s “Wachet Auf” and composers like J.S. Bach, who added one of his complex harmonizations to enrich Nicolai’s soaring melody. And that tradition continued into the 19th century: a tune like Rowland Prichard’s “Hyfrydol” is perfectly fine sung as a solo (though I’m not sure it would work well with a congregation trying to stay together in unison); with the moving harmony parts added to the blend, the text of a hymn like “Savior, While My Heart Is Tender” (#335 in the 1973 Covenant Hymnal from which I learned to sing harmony) can soften the hardest heart. Back to back in the “red hymnal,” we tenors are called to add some achingly lovely phrases to two heartbreaking hymns about the Crucifixion: Lowell Mason’s harmonization of Isaac Watts’ “When I Survey the Wondrous Cross” (#202, the last four bars nearly make me cry every time I sing them) and the traditional setting of the American folk hymn “Were You There?” (#203; though hearing an army of Johnny Cash clones sing that one in unison wouldn’t be half-bad…)

Of course, beauty for its own sake isn’t a compelling reason to say that Bonhoeffer is wrong. In one of his funniest songs, Steve Martin claims that “Atheists Don’t Have No Songs,” but if they did, I’m sure they could have lovely four-part arrangements. But beauty can also testify to the creative and redeeming power of the Word, and lift our world-weary hearts and spirits (for a few verses, at least) heaven-ward.

Even Bonhoeffer warns of the ‘unmusical’ — while untrained singers are “less dangerous foes of congregational singing” than some of the overly able men and women he’ll assail in a moment, he does seem to accept that there’s virtue in congregational singing requiring some degree of skill. And, without doubt, it takes skill to sing (well) in unison.

But that’s at least as true of singing one part of a harmony. And cultivating such a skill can convey the same kinds of benefits as training at anything that requires discipline. It teaches humility, as we recognize that even native gifts need to be honed. It requires attentiveness, not only to the notes and text, but to the voices around you. Once mastered, it requires restraint — possessing the skill also demands knowing how (and how much) and when (and when not) to use it. And, like any other skill, done well and with right motives it honors God.

Admittedly, there’s a danger here that Bonhoeffer was right to point out:

There are some destroyers of unison singing in the fellowship that must be rigorously eliminated. There is no place in the service of worship where vanity and bad taste can so intrude as in the singing. There is, first, the improvised second part which one hears almost everywhere. It attempts to give the necessary background, the missing fullness to the soaring unison tone, and thus kills both the words and the tone. There is the bass or alto [note: not the tenor] who must call everybody’s attention to his [sic] astonishing range and therefore sings every hymn an octave lower. There is the solo [ahem, soprano] voice that goes swaggering, swelling, blaring, and tremulant from a full chest and drowns out everything else to the glory of its own fine organ. (p. 60)

Anyone who’s been in a Christian worship service knows exactly what he’s talking about. But it’s a classic case of arguing against something by treating the outlier as the norm: just because it’s possible for a bass, alto, or soprano to be vain doesn’t mean that all are. (And tenors, of course, are perfectly virtuous.)

3. It trains us to be the Body of Christ

Here again, there is clear value in unison singing, as Bonhoeffer eloquently (but perhaps too forcefully) argued in Life Together. Unison singing can embody the unity of the Church for which Jesus prayed in John 17 or Paul advocated in most of his epistles (e.g., Eph 4:1-6).

But so too can singing several parts in a congregation. “Harmony,” after all, is a pretty good aspiration for the many parts that compose the Body of Christ (cf. Rom 12:16). Let me hesitantly suggest that “unisonality” pushes us towards viewing unity as “uniformity.” Whereas living — and singing — in harmony recognizes that differences exist. Some are of degree of power or status, so Paul tells the Romans not to be proud and the Ephesians to be humble: harmony singing likewise trains us to subordinate our own abilities (even those honed to the point of skill) to the good of all. Beautiful as some tenor lines are, many of them (especially in the Swedish Pietist tradition that I grew up in) consist of only three or four notes, but those notes add depth to what the melody and other harmony lines are doing.

But it also recognizes that the Body of Christ consists of many parts with different talents and callings, all of which are important. I happened to be teaching 1 Cor 12:12-31 to our 8th grade confirmands before the worship service that sparked this post. Just as some are called to be teachers and others healers and are given gifts commensurate with those vocations, is it truly vain to believe that some are called and gifted to sing different parts in worship? (Even Bonhoeffer’s unison sound does not find the entire congregation on the same pitch, but spread across multiple octaves, as people sing to the frequency most suited to their physiology.)

Whatever the dangers of “vanity and bad taste” that might ensue from multi-part congregational singing gone awry, far worse are the dangers of worship in which God-given gifts are left idle, or even scorned, or worship in which those who “lead” worship become performers while the rest of the congregation become an “audience.” In my experience, at least, a congregation singing in harmony — even when not done perfectly — becomes a visible sign of the invisible grace that unites the different parts of the Body into one Church.

What do you think? Do you prefer unison or harmony singing for congregations? Do you have a favorite four-part arrangement of a hymn? Or a favorite harmony line you like to sing?

One thought on “Live (and Sing) in Harmony with One Another”