While my job is to teach people about history, my vocation as a parent has made me realize that I know next to nothing about how to teach young children about history. But with our five-year old twins entering kindergarten this fall, I decided to spend this summer trying to understand how children might best learn about the past.

Please take the following observations with huge grains of salt — I’m no expert in child development, and I’ve no idea how typical Lena and Isaiah are… But with that said, here are five things I’ve learned about teaching history to five-year olds!

1. A Minnesota Historical Society membership is the best deal in town

There are lots of things I love about living in my home state, but the quality of our historical society is right near the top of that crowded list. For only $75, our entire family gets free admission all year to every MNHS site. Frankly, I would shell out that money if all it bought us was free entry to the Minnesota History Center in St. Paul. But there are twenty-five other sites in the state. Just in the Twin Cities area that includes Historic Fort Snelling (near the Minneapolis-St. Paul Airport), Mill City Museum (built into an old flour mill in downtown Minneapolis), and the Oliver Kelley Farm (a little slice of the 1860s in the northwest metro).

I get the feeling that ours is a better-than-average state historical society, but I’m sure that others offer similar kinds of opportunities for similarly affordable prices.

At least in higher ed, I feel like “experiential learning” is one of those good ideas that gets oversold — chiefly by lazy, overgeneralized comparisons to other modes of pedagogy. Not every twenty-year old actually learns well in this way.

But five-year olds sure do! Behold, a list within a list: Lena and Isaiah’s five favorite experiential, past-related, learning activities…

Oh, the fun that’s about to begin! 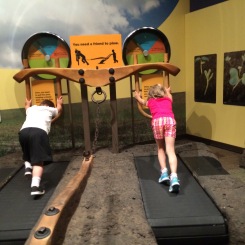 Not pictured: your blogger steering the plow… Is that what you do with a plow? 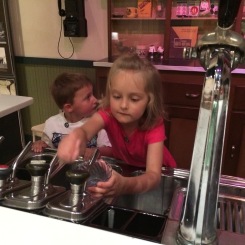 A souvenir to bring home from the History Center

Reenacting a regular part of life at the Oliver Kelley Farm

Nothing at these sites is too terrifying (though I’d just as soon the aforementioned scavenger hunt not include a lesson in 19th century dentistry!) but watching the responses of five-year olds has reminded me just how much mundane and extraordinary violence runs through human history. Isaiah is generally bothered by loud noises — we won’t be taking a second trip on the eight-story elevator ride at Mill City, since it recreates a factory explosion that scared the poor boy half to death — so I wasn’t surprised that he didn’t want anything to do with the tornado simulation in the History Center’s exhibit on the history of weather. But anyone would be unnerved by the sound of prairie winds beating against the thin walls of a white settler’s sod cabin in Then Now Wow. Both exhibits remind children (of all ages) that human history is worked out within physical environments that defy our delusions of control and security.

Then it was troubling to see Isaiah in the Then Now Wow streetcar… At each stop on the route, you push a button and a window opens to show a map, photo, or video from the history of part of the Twin Cities. Already a huge baseball fan, Isaiah loved seeing Lexington Park, where his grandfather’s beloved St. Paul Saints played into the 1950s. But at one point there was a crime scene photo from the Prohibition Era, and he’s refused to spend more than two minutes in the street car ever since.

I’ve had to be especially cautious with exposure to one of my favorite fields: military history. Thanks to a couple of illustrated Bibles, our children associate soldiers with the Crucifixion, so I knew they’d be leery of the historical interpreters marching around at Fort Snelling. And fear of soldiers plus fear of loud noises made it impossible that Isaiah would enter the plane in the History Center’s acclaimed Greatest Generation exhibit that simulates how paratroopers felt on D-Day!

4. Children are capable of thinking historically

It’s a truism of our discipline that not every engagement with the past is actually “history.” So while I was glad to see our kids enjoy all the activities described above — and they’ve reminded me of the great potential for learning inherent in play — I was also curious to see how they thought about what they were experiencing. Did they demonstrate capacity for any of the “five C’s of historical thinking“?

It’s a tricky question. Take context, for example. In their “five C’s” essay, Thomas Andrews and Flannery Burke observe that

Imaginative play is what makes context, arguably the easiest, yet also, paradoxically, the most difficult of the five C’s to teach. Elementary school assignments that require students to research and wear medieval European clothes or build a California mission from sugar cubes both strive to teach context. The problem with such assignments is that they often blur the lines between reality and make-believe. The picturesque often trumps more banal or more disturbing truths.

And I’m not sure that I’ve made much headway in conveying contingency (“the most difficult of the C’s”) or complexity. (Earlier this summer Isaiah came in while I was rewatching part of Ken Burns’ Baseball series, the episode dedicated to Jackie Robinson breaking the color line… I couldn’t begin to explain the complex history of racism in this country, though whatever I said made him decide that the Dodgers are his favorite National League team.) But the other two are well within reach of our five-year olds.

I’ll save change over time for #5 below, but causation is right up the alley of kids who love to take things part and put them together. (As I write, they’re working on jigsaw puzzles.) I quickly realized that the single most helpful question I can ever ask at these museums and sites is one familiar from other contexts: “How do things work?” Or, “Why would people do ______ in the past?”

This worked best at the Oliver Kelley Farm, which recreates a miniature economy that was largely self-sufficient but also tied in to larger markets. For example, we came across a cart that had wheels with no rubber or metal. “Lena and Isaiah, why do you think they made the wheels out of wood?” It took about five seconds for their eyes to turn to the forest separating the farm from the Mississippi River.

And that led right into this: “Isaiah and Lena, why do you think they lived so close to the river?” We talked about irrigation, but also that grain from farms like Oliver Kelley’s could be taken down the river to… yep, the flour mills in Minneapolis. (Well, not Oliver Kelley’s — one of the historical interpreters told us that the farm didn’t grow many cash crops. But it made them make a connection back to Mill City Museum, which has a model that lets kids experiment with ground- and river-based transportation to get grain from the country to a mill in the city.)

And they could at least speculate about why Europeans moved across an ocean to settle farms like that one (or the homestead with the sod house and ox-drawn plow in the History Center). That points not only to a dawning awareness of causality, but one last, especially meaningful realization…

5. Children are capable of historical empathy.

The relative absence of change over time — or historical continuity — seems to come naturally to children. At the History Center, Isaiah and Lena enjoy Open House, an exhibit that recreates a small home on the East Side of St. Paul, with each room evoking a different era and a different ethnic group. Their favorite space is the backyard, where games from the childhood of my parents are instantly recognizable to their grandchildren.

Their next favorite part of the house is the post-WWII bedroom: they can put oversized coins in a giant piggy bank. Each coin represents the price at the time for ordinary household items. Money doesn’t play a big role in the world of a five-year old, but they have some sense that the numbers are oddly low — that the items are familiar, but their cost has changed significantly over time.

More importantly, children seem capable of historical empathy for people who inhabited a time quite unlike their own. Lena especially wants to reflect on what technological, economic, and other types of change mean for how people perceive and experience the world. Back to the Kelley Farm, where we had spent a lot of time thinking about all the tasks that go into a farm family’s day:

“Lena, what was your least favorite part of the farm?”

“I didn’t like the sheep… but they needed them to make clothes.”

“How do you think your life is different because you’re not growing up on a farm?”

“We don’t need to do that much work.”

Then a couple of weeks later, she took a step closer toward an imaginative understanding of the past as a “foreign country” when she told me at church, “Dad, history was hard.”