• It’s easy to make fun of French military history. (I’ve done it.) But the “strange defeat” of his nation in May-June 1940 was no joke to historian Marc Bloch…

• How a Twin Cities megachurch may be a case study for evangelicals and Anabaptists learning from each other how to do church.

• If Andy Crouch is right, we should be having a conversation within Christian higher education how about we can approach power as a gift. If.

• Weren’t able to attend the first talk in our series previewing chapters in Whole and Holy Persons: A Pietist Approach to Christian Higher Education? No problem, someone tweeted the highlights. (And video will be available in a week or two.)

• Weren’t able to attend the second talk (mine) in said series? See previous.

• Another recent talk of mine at Bethel is already available on YouTube. It shared reflections on teaching online this past summer, some of which I converted to blog form. 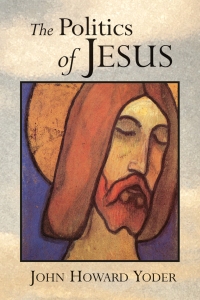 • I have to admit: when I wrote in passing about John Howard Yoder in the post on Anabaptist ecclesiology, I had no idea that he had such an appalling record of sexual misconduct with women. (Honestly, I’m not sure which word is appropriate here: is abuse too strong? is harassment too weak?) Then I read Mark Oppenheimer’s article in yesterday’s New York Times. Mennonites and other Anabaptists, of course, have been wrestling with this since the 1990s. Learn more from Sara Wenger Shenk’s blog at Anabaptist Mennonite Biblical Seminary (where she deals with the fact that many of Yoder’s victims were his students at that seminary) or Joanna Shenk’s survey at the Mennonite Church USA website.

• Last week in this space I alluded briefly to a recent conference on Billy Graham. Here’s a more detailed summary of the presentations, all in some way answering the question, “How did Billy Graham shape what it means to be modern, Christian, and American?”

• I’m pretty sure that offering “online Communion” will not turn around the fortunes of a denomination that’s been in decline since the mid-1960s. Fortunately, most United Methodist leaders seem to agree that Communion “entails the actual tactile sharing of bread and wine in a service that involves people corporeally together in the same place.”

• Carol Howard Merritt reflected on the importance of telling stories within intergenerational congregations: “Understanding our hardships in the context of multiple generations, connecting our story to a larger history, and realizing that we step into a flowing faith of strength, helps us to build our intergenerational selves and, in turn, become a resilient people.”

• Wesley Granberg-Michaelson would argue for comprehensive immigration reform “because of the Bible’s clear instructions to care for the stranger and foreigner in our midst,” but he points out that immigration of Christians from Latin America, Asia, and Africa has the potential to revitalize American churches — even if many are too obsessed with the flight of white millennials to notice…

• Add Roger Olson to the growing, diverse chorus of Christians critical of football. (And if you missed, “League of Denial,” the Frontline episode on “The NFL’s Concussion Crisis,” take a second look. It’s riveting, and disturbing.)

• If football were somehow to go away… Slate‘s map of the “United Sports of America” suggests that there are at least forty-seven other options to choose from (though Texas, Alabama, and Wisconsin might have a particularly hard time coping with the loss).

• Italian composer Giuseppe Verdi turned 200 this past Thursday. So I’m assuming that somewhere in Appalachia, my father played at least one or two Verdi operas in honor of the occasion: he has them all (including the ones only recorded once or twice).

• The release of yet another Malcolm Gladwell book prompted yet another wave of criticism — see, for example, psychologist Christopher Chabris’ review of David and Goliath in the Wall Street Journal, and then his follow-up at Slate. But historian L. D. Burnett found such responses from intellectuals both “counterproductive” and “unseemly and terribly unkind” (not necessarily to Gladwell, but to those who buy his books “because they want to think about stuff they haven’t thought about before, they want to consider things in a new light, but they don’t quite know how to go about it”).

• In other Malcolm Gladwell news… The biblical title of the new book is no accident: in an interview with religion reporter Sarah Pulliam Bailey, he not only talked about growing in a rather evangelical Mennonite home, but that “This book has brought me back into the fold. I was so incredibly struck in writing these stories by the incredible power faith had in people’s lives, it has made a profound impact on me in my belief. That’s been the completely unexpected effect of writing this book. I am in the process of rediscovering my own faith again.”

• Sample joke from the official magazine of the Boy Scouts of America, just after WWI:

• Facebook analysts found that about 28% of married FB users wed someone else from their alma mater. Not surprisingly, about half of the top schools in this category are Christian colleges.

• When the new president of one Christian college reads neo-liberal economist Friedrich Hayek and “his argument for the link between private property and freedom,” he sees “a direct line going all the way back to those pages of the New Testament, because what the Apostle Paul and others were representing was an alternative to totalitarianism. When you look at the Apostle John – and whatever else you think the Book of Revelation says about the future—what it definitely was, was the greatest political protest letter ever penned in the history of the world, because he was saying, ‘The state has no business telling us how we should govern our own life together.'”

• Should college professors stop writing references for students applying to Teach For America?

• Should corporations be allowed to fund and design their own PhD programs with university partners?