I’m not quite as excited about this announcement as the one I blogged about earlier today, but that’s just me being selfish, since it’s great news for lots of people, including the central figure…

Rev. Efrem Smith will be leaving his position as superintendent of the Pacific Southwest Conference of my denomination, the Evangelical Covenant Church, in order to become president and CEO of World Impact, effective October 15. Efrem had this to say, via Covenant News: 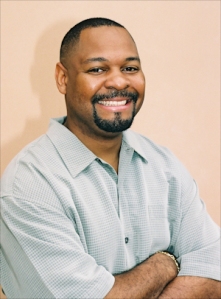 I am so grateful for the opportunities that I have had to serve within the Evangelical Covenant Church, both as a church planter and as conference superintendent…. Serving with the Pacific Southwest Conference staff and executive board to resource pastors and congregations has been a unique joy. I look forward in this new call with World Impact for more opportunities to collaborate and influence the ECC’s efforts in dimension of urban mission as well as multiethnic ministry.

World Impact began as a Bible club in the Watts neighborhood of Los Angeles, in the wake of the riots that gripped that city in 1965. It now serves in LA and ten other cities, engaging in evangelism, discipleship, ministries of compassion, church planting, and leadership development. It runs schools, camps, medical clinics, thrift stores, and the Urban Ministry Institute.

So it sounds like a great opportunity for Efrem. It’s certainly a coup for World Impact.

Welcome to the team, @efremsmith! On 10/15, Efrem will be joining us as our new CEO and President! More info to come!

Efrem first came to my attention as the founding pastor of Sanctuary Covenant Church, a fast-growing, multi-ethnic church plant in north Minneapolis that drew dozens of Bethel students. The hip-hop worship service garnered plenty of attention, but Efrem’s preaching was what sold me. While in Minneapolis he preached many times in Bethel’s chapel service (his talk on the genealogy of Jesus was surely the first time I’d seen someone effectively tackle what I had thought to be the unpreachable first chapter of the Gospel of Matthew) and at least once at my own church, which is about as different from Sanctuary as you can imagine but has had the privilege of supporting its community development work for a few years now.

I last saw him preach at the Covenant’s 2011 annual meeting, a year after he moved from Sanctuary to the Pacific Southwest Conference. Calling the sermon “a song” to two great Covenant leaders — Jim Hawkinson, long the Covenant’s chief communicator, and Willie Jemison, a pioneering African-American Covenant pastor in Chicago, Efrem celebrated the Church as “the vehicle that God has decided to use to advance his Kingdom in the world… not through politics, not through social experiments, but through this messy, upside-down, sometimes-dysfunctional, institution-organic movement known as the Church!” And I smiled and teared up as he shared his story (95% of the people in the room had one) of being mentored by Jim Hawkinson, who had died just a month before:

For a year and a half I shadowed that man everywhere he went. When he went to the hospital, I went to the hospital. When he did a funeral, I was there. When he took communion to the sick and shut-in, I went with him. I carried his Bible. I sat in his office. That’s community: not just related, but a reference for growth and development! And that’s how I felt with Jim Hawkinson. He took me under his wing, and he schooled me in the ways of the Swedish Covenant…. Hawkinson said, “Sit down!” and over Swedish pancakes, broke it down.

It was Efrem in a nutshell: masterfully interweaving multiple passages of Scripture (mostly Acts 2 and that pesky first chapter of Matthew again) and navigating multiple cultural currents as he at once charmed and challenged his audience to honor their past and welcome their future. I started counting down the days until he became president of the Covenant Church.

And that might still happen (the Covenant News article and a statement from the Pacific Southwest Conference emphasized that he was retaining his Covenant credentials), but for now, a detour into an important ministry that’s clearly close to his heart.

And sad as I am not to have Efrem’s leadership in one of the fastest-growing regions of the Covenant, or to have him preaching regularly from our pulpits, his departure is itself in keeping with the best traditions of the denomination I’m proud that we share. Not only is he moving to an organization that seems to share our commitment to the “whole mission of the church,” but the Covenanters were originally known as “Mission Friends,” not setting out to create separate, inward-oriented structures, but to partner together as “the companion of all who fear” God (Ps 119:63, from a sermon at the Mission Covenant’s 1885 founding). So Covenanters have often crossed denominational lines to serve in other organizations. I’ve mentioned Paul Rees here before: another Minneapolis Covenant pastor, Rees spent fifteen years at the end of his career as vice-president of World Vision. The Covenant’s greatest historian, Karl A. Olsson, left the presidency of its college and seminary, North Park, in order to serve with the ecumenical nonprofit organization Faith at Work (now Lumunos).

I’m sure Brother Efrem will extend that legacy, serving the Church more than any one church as he advances God’s kingdom. Meanwhile, I’ll keep counting those days…