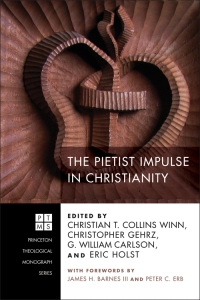 Part four of our romp through The Pietist Impulse in Christianity raises another deceptively simple question, “Was John Wesley a Pietist?”

Even if one accepts a definition of “Pietist” that encompasses people other than early modern German Lutherans, Wesley is a controversial figure. He is included in Carter Lindberg’s popular collection, The Pietist Theologians, and tertiary sources will often describe Pietism as being at least a significant influence on Wesley. Yet perhaps the most significant Methodist historian of the 20th century, Albert C. Outler (chief editor of the widely cited — in this volume among others — The Works of John Wesley), took pains to distance Wesley from Pietism, claiming in 1964 that his subject “was never the typical pietist” and then twenty years later leaving Pietism out of a list of “diverse influences that converged in” him. (Quotations from the second chapter described below.)

The first two entries in this section of the book demonstrate the clear influence of various strands of German Pietism on Wesley, but also the limitations of that influence.

First, Geordan Hammond points out that the young Wesley, during his troubled tenure as a missionary in colonial Georgia, encountered not only the Herrnut Pietism of Moravian missionaries, but also the Halle Pietism of Johann Martin Boltzius and Israel Christian Gronau, two Lutheran pastors sent to shepherd a group of Protestant emigrés from Catholic Austria known as the “Salzburgers.” Drawing on reports from Boltzius and Gronau only recently translated from German, Hammond summarizes discussions between Wesley and the Salzburgers’ pastors on everything from sacraments to ecclesiology to hymnody. (Wesley also attempted to mediate the tensions between the missionaries from Herrnhut and Halle.) Ultimately, Hammond concludes that “Pietist hymnody and theology exerted a lifelong influence on Wesley,” even though his Anglican “High Churchmanship” created a “fundamental barrier” (e.g., he refused to administer Communion to his friend Boltzius, who “was neither baptized nor ordained by a bishop who upheld apostolic succession”).

For Hammond, Wesley’s concern for apostolic succession (like his desire to recover early Church doctrines) reflects his “goal of renewing the primitive church in the primitive Georgia wilderness.” The same primitivism is at the heart of Thomas Buchan‘s account of Wesley’s views on the “Constantinian Fall” of the Christian church. How did Wesley come to believe (as stated in a 1787 sermon entitled “Of Former Times”) that “this very event—Constantine’s calling himself a Christian, and pouring in that flood of wealth and power on the Christian church, the clergy in particular—was productive of more evil to the church than all the ten persecutions put together”? (Not that the centuries preceding Constantine’s reign were any more perfect, in Wesley’s judgment!)

Buchan notes that this particular view of Wesley’s has been somewhat overtaken by a recent enthusiasm for Wesley as “traditionalist,” strongly influenced by imperial church-admiring High Church Anglicans and the Patristics themselves. But Buchan points out that Wesley also read a book that we have already encountered in this series, the Pietist scholar Gottfried Arnold’s Nonpartisan (or Impartial) Church History, where he would have found the argument that (in Buchan’s summary) “the Constantinian clergy, having received worldly honor and power as the result of imperial patronage, became the architects and functionaries of a defective orthodoxy….”, while the real Christians upheld simplicity and suffered persecution. To Buchan, Wesley’s High Church leanings “were tempered by Pietistic historiographical conventions”; against Outler, he finds Pietism a significant influence on Wesley’s “mature vision of the history and the relationship between the institutional church and genuine Christianity.”

Finally, Shirley Mullen (president of Houghton College) draws on her background as a British intellectual historian (with a particular interest in “freethinkers”) and her position as an educator in the Wesleyan tradition to contrast John Wesley’s view of learning with that of David Hume. Her essay, “The ‘Strangely Warmed’ Mind” does not explicitly answer the question, Was Wesley a Pietist?, but it does suggest that key aspects of a “Pietist impulse” were both shared by Wesley and influential in his distinctive understanding of learning and education.

First, because of their biblicism and “enthusiasm,” both Wesley and Pietists find themselves unfairly — though given some moments of hyperbole in their writings, understandably — tarred as anti-intellectual. Mullen quickly dispenses with this charge, concluding that Wesley “may have wanted to speak ‘the plain truth to plain people’ as he frequently declared, but the ‘plain truth’ emerged out of the expansive wealth of a life devoted to wide ranging reading, in season and out.” (Not to mention the wide array of Methodist educational endeavors during Wesley’s life and after.)

Second, Mullen finds that the life of the (strangely warmed) mind was very much part of Wesley’s emphasis on sanctification, with learning one of many instruments by which humans could freely cooperate with the Holy Spirit in seeking “Christian perfection.” Likely contemplating the large number of Methodist- and Wesleyan-founded colleges (and no Protestant tradition founded as many in the 19th century) that have become, at most, nominally Christian, Mullen suggests that

…if Wesley were to lament the long term impact of education in certain quarters of the Methodist vineyard, it would be in those places where learning has been mistaken for ‘end’ rather than ‘means’ or allowed to operate for human aggrandizement, apart from submission to the purifying and loving work of the Holy Spirit.

Considering the Anabaptist critique we’ve been hearing in another of my series, that Pietists are excessively individualistic and care little for “radical world transformation,” it’s important that Mullen immediately underscores that Wesley’s view of learning as an instrument of perfection is that it helps equip us to “partner with God in His work of restoring in us and in our neighbors the image of God, and in His work of renewing all of Creation” (my emphasis). All of which seems to echo Spener and Francke’s desire for renewal not only of the individual convert, but of the church and society.

Third, Wesley refused either to elevate head above heart and hand or even to treat them as being at odds with each other. While my own employer has taken this recognizably Pietist sentiment to heart and long proclaimed its desire to educate “whole and holy persons” (and the foreword to this book contributed by Bethel president Jay Barnes echoes Mullen on this point), Houghton’s president draws another conclusion that also resonates with the history of Pietism:

Wesley’s priority on right motive and right action, rather than on right thinking, might not offer the compelling motive for intellectually intense pursuit of right or orthodox doctrine that we associate with other theological traditions. Nevertheless, Wesley’s fellowship of right hearts, that supposedly can transcend most areas of doctrinal difference, also invites space for mutually beneficial and growth-producing intellectual engagement, precisely because Christian unity does not depend on “right thinking” but on “right willing” and “right loving.”

It makes for an intriguing comparison to classical Pietists. The rigorous scholasticism of their heresy-hunting critics did motivate a coldly orthodox kind of head-centered education, but couldn’t Pietist irenicism and openness also create “space for mutually beneficial and growth-producing intellectual engagement”?

Forgive me for editorializing a bit here rather than merely summarizing. Mullen’s essay connects more directly with my own research interests than any other in the volume, except for one of the chapters on Scandinavian-American Pietism that we’ll preview as this series continues next week.