I didn’t watch more than highlights of the impeachment hearings, but I did listen (twice) to the speech Sen. Mitt Romney (R-Utah) made yesterday. The first senator in history to vote for the conviction of a president from his own party, Romney offered a measured but powerful statement that was as principled and courageous as anything I’ve seen in American politics since 2016. But as eloquent as the speech was, I think Melissa Borja is right that “it was actually the twelve seconds of non-speech—his long, heavy silence–that most powerfully communicated the intensity of his emotions, the depth of his faith, and the religious grounding for his decision.”

She’s referring to an uncomfortably long pause that starts 51 seconds into in the eight-minute address. As Romney talked about taking an oath as senator-juror, and what that means for him as a person of deep religious faith, he suddenly “stared down at his notes. He bit his lip several times. He took deep breaths. The microphone picked up the sound of a hard swallow, and one wondered if he was fighting back tears.”

So what did this silence mean? “Most obviously,” concluded Melissa, “his silence communicated the intense emotion he felt in the moment.” But also “the deep religious commitment that guided his decision… As Romney took deep breaths and struggled to find his composure, these long twelve seconds appeared to be a moment when he truly understood—not just intellectually, but in his very body—the weight of his sacred oath, the responsibility of his religious convictions, and the higher authority to which he believes he must ultimately answer.” To Melissa, it was a telling moment, revealing that Romney’s speech was no mere political calculation, but “a profoundly religious” act. 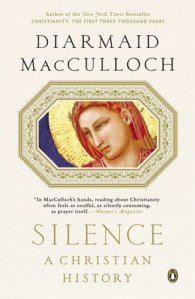 Indeed, her post made me want to revisit Diarmaid MacCulloch’s book on the history of silence in Christianity, which I started, stopped, and never finished a couple years ago. Starting with Judaism and moving centuries past Christ, MacCulloch finds countless examples of religious silence, each with rather different meanings: for example, the spiritual discipline of silence practiced by monks sounds unlike the silence of religious authorities complicit in injustice.

Likewise, I’ve been pondering the many silences that one can hear during this most un-silent presidency.

Start with what follows Romney’s speech on the video embedded above. I caught myself expecting to hear an instant mix of Democratic cheers and Republican jeers, but the Senate chamber remained as quiet at the end of Romney’s remarks as throughout them. What to make of that? Perhaps the clip just cut off too abruptly, but two other explanations came to mind, both striking because they seem so unusual nowadays: Did senators and those in the gallery fall back on the decorum that’s supposed to be a hallmark of Congress’ more deliberative chamber? Were they genuinely surprised by Romney’s words, and unsure how to respond to ideas and ideals that transcend partisanship?

Now, the video doesn’t show who else was in the chamber at that moment. But as my imagination filled in what’s off camera, I wondered if one of the senators sitting quietly in Romney’s shadow was Ben Sasse. The young Republican was a relatively independent voice early in Trump’s term, but he has behaved quite differently since the president endorsed him last September — “a surprise move,” observed the New York Times, “that rendered the usually outspoken Nebraska senator mum….”

I know that I’m predisposed to think too highly of someone with a Yale PhD in history and a background in Christian higher education, but Sasse’s mum-ness is the silence of someone who ought to know better: someone who has the words, but won’t speak them. Romney’s conscience found voice in a speech that will echo in history — whether as a tragic eulogy for what was lost in these years or the first note of a swelling chorus sung by a country that rediscovered the better angels of its nature. The consciences of the Sasses in the GOP can do no more than whisper, admitting in private what they dare not say in public.

Then there are my own silences.

It’s not that I’ve been afraid to articulate my opposition to Donald Trump. Just search this blog or my archive at The Anxious Bench. Nevertheless, there are silences in my response to his presidency.

Above all, there’s the silence of privilege, from someone whose day-to-day existence is largely untouched by the incompetence, imprudence, corruption, and cruelty of this administration. Or worse, the double silence of someone who won’t use his voice for the voiceless.

So what shall I do?

Unlike the elected officials that Trump intimidates and the immigrants that Trump demonizes, no oath binds me to “support and defend the Constitution of the United States against all enemies, foreign and domestic.” But like Mitt Romney, I do feel bound by my conscience. And my faith, like Romney’s, “is at the heart of who I am.”

So I pray that God would grant me — like us all — the wisdom to know when to speak, when to stay silent, and, above all, how to cast the ballot that Republicans less courageous and dutiful than Mitt Romney claim to trust above their own judgment.