I thought through the educational implications of a Pietist motto, updated my speaking schedule for 2019-2020, and interviewed the author of a helpful new book on Christians who support Donald Trump. 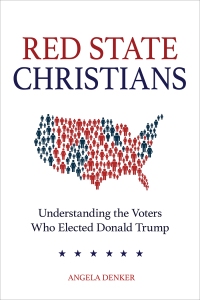 • Another way of looking at Red State Christianity: from the point of view of American evangelicals who live in England, came home for a cross-country tour, and noticed some striking differences.

• Charlie Camosy, a scholar who defies blue/red state binaries, urged the media to rethink how they cover religion in the run-up to the 2020 election.

• A Vineyard pastor wondered “why, in the face of the next election and the divisiveness that is sure to accompany it, more church leaders and congregations aren’t working in advance to forge deep relationships with leaders and congregations from different geographic backgrounds, especially when no organization is better equipped than the church to bridge these great divides.”

• A Baptist pastor here in town urged congregations to opt for a more “local vision” of church, not one that resembles Wal-Mart.

• Another remarkable story from Ruth Graham, who found that one Catholic archbishop’s fall from grace landed him in a small town in Kansas.

• Forty years ago, my favorite TV miniseries considered how a “sense of Christian service could be corrupted into the most mendacious and reckless behaviour…”

• The death of longtime Zimbabwean dictator Robert Mugabe seemed like a good time to check in on the state of democracy in Africa.

• It’s not uncommon to hear people suggest that America is entering a stage analogous to the fall of Rome. But maybe that’s not such a bad thing.

• It’s the start of a new academic year, which means that it’s time for yet another misleading headline about the death of the college lecture.

• I’m decently knowledgeable about the history of higher education in the 20th century, but reading this article by an actual education historian made me realize how little I know of American colleges and universities in the 19th century.

• We’re still several months away from teaching our new course on the history and politics of sports, but I’ve already added to our reading list Jemele Hill’s argument that elite African American athletes should play for historically black colleges and universities, rather than Division I powerhouses.

• For one evangelical university, the future of the seminary lies in taking over undergraduate theology and biblical studies courses.

• What’s at stake as Christian colleges and universities face financial challenges? John Hawthorne summed things up about as well as anyone could.

• What does it do to middle-class families to take on debt to pay for their children’s college education? An anthropologist investigated and found many experiencing “a perpetual conflict between moral duty and financial reality.”