Yesterday I put my Modern Europe students through what’s become a pre-Thanksgiving ritual: watching the 2005 German movie, Sophie Scholl: The Final Days, about the anti-Nazi student resistance group known as the White Rose. About, that is, the arrest, interrogation, and execution of its leaders, Sophie and Hans Scholl. Coming after our week on the Final Solution, it’s a wrenching experience for students to watch the tragic story of idealistic young people roughly their age. But the Scholls’ martyrdom is as hopeful a note as I dare choose for the end of a story that’s mostly about Christian participation in or acquiescence to the mass murder of the Jewish people.

It’s not ideal that the schedule leads us to have that experience right before Thanksgiving — that timing usually guarantees low attendance, though yesterday all but one showed up — but I always find myself feeling grateful for the witness of the Scholls and their friends. Their intellectual resistance to the Nazi war on life, dignity, and conscience did little to slow a war that ground on for two bloody years after their execution in February 1943, but it’s a powerful example to us still.

The White Rose derived from several sources, but Christian faith was clearly an influence on Sophie and Hans Scholl and comrades like the Orthodox student Alexander Schmorell. It’s especially clear in the fourth of six leaflets put out by the White Rose. Their unflinching condemnation of their supposed Führer was certainly in the back of my mind in writing my recent Anxious Bench post on spiritual warfare:

Every word that proceeds from Hitler’s mouth is a lie. When he says peace, he means war. And when he names the name of the Almighty in a most blasphemous manner, he means the almighty evil one, that fallen angel, Satan. His mouth is the stinking maw of hell and his might is fundamentally reprobate. To be sure, one must wage the battle against National Socialism using rational means. But whoever still does not believe in the actual existence of demonic powers has not comprehended by far the metaphysical background of this war. Behind the tangible, behind that which can be perceived by the senses, behind all factual, logical considerations stands The Irrational, that is the battle against the demon, against the messengers of the Anti-Christ. Everywhere and at all times, the demons have waited in darkness for the hour in which mankind is weak; in which he voluntarily abandons the position in the world order that is based on freedom and comes from God; in which he yields to the force of the Evil One, disengaging himself from the powers of a higher order.

The White Rose exhorted Germans who “claim to be Christians” to “attack the Evil One where it is strongest, and it is strongest in the power of Hitler.”

To better understand how Christian belief and practice had shaped and inspired the White Rose, this year I read through At the Heart of the White Rose, a collection of the Scholl siblings’ letters and diaries. Edited by Inge Jens and translated by J. Maxwell Brownjohn, a new paperback edition of the book came out earlier this year from Plough, the publishing arm of the Bruderhof community. You can hear echoes of the fourth leaflet in passages like this entry from Hans’ diary, written after attending a Russian Orthodox worship service during a stint as an army medic on the Eastern Front:

I wanted to love and laugh because I could see that hovering above these defeated people was an angel stronger than the powers of nothingness. Spiritual nihilism was a major threat to European civilization, but as soon as it underwent its ultimate development in the total war to which we have finally succumbed, and as soon as it veiled the mighty sky like a sea of gray cloud, it was vanquished. (August 9, 1942)

Hans anticipated a “new wave of rebirth… a new religious awakening” to emerge from the war, but he knew that the struggle would be costly. “We shall never escape suffering,” he wrote his pietistic mother two weeks later, “not till the day we die. Isn’t Christ being crucified a thousand times every hour, and aren’t beggars and cripples still being turned away from every door, today as always?” Preparing to distribute the sixth White Rose leaflet at the University of Munich, he wrote to his girlfriend that “because the danger is of my own choosing, I must head for my chosen destination freely and without any ties. I’ve gone astray many times, I know. Chasms yawn and darkest night envelops my questing heart, but I press on regardless.” Two days later he and Sophie were arrested by the Gestapo; a week after the letter, they were guillotined. 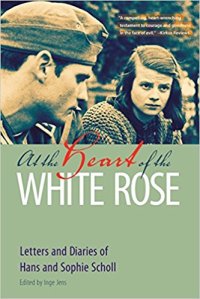 But tellingly, she doubted herself more than others. Her statement of God’s power was preceded by this prayer: “O God, I beseech you to take away my frivolity and self-will, which clings to the sweet, ephemeral things of life. I can’t do so myself, I’m far too weak.”

Above all else, this is what strikes me about Sophie Scholl: prayer was at the heart of her work with the White Rose. A few more examples:

I realize that when I love people very much, I can’t do better than include them in my prayers. If I love people in all sincerity, I love them for God’s sake. What better thing can I do than take that love to God. (December 12, 1941)

My soul is like an arid waste when I try to pray to you, conscious of nothing but its own barrenness. My God, transform that ground into good soil so that your seed doesn’t fall on it in vain. (July 15, 1942)

Whenever I pray, the words drain out of me. The only ones I can remember are ‘Help me!’ I can’t offer up any other prayer for the simple reason that I’m still far too abject to be able to pray. So I pray to learn how to pray. (October 10, 1942)

(Hans thinks more than prays in his writing, but one supplication — again, from the summer of 1942 — stands out: “O God of love, help me to overcome my doubts. I see the Creation, your handiwork, which is good. But I also see man’s handiwork, our handiwork, which is cruel, and called destruction and despair, and which always afflicts the innocent.”)

Still more strikingly, Sophie prays to a God whose presence she rarely feels. “Sometimes when I utter God’s name,” she wrote to her boyfriend two months before her arrest, “I feel like sinking into a void. It isn’t a frightening or dizzy-making sensation, it’s nothing at all — and that’s far more terrible.” But even in this dark night of her soul — even doubting, as she wrote earlier, that she could do more than “address [God] falteringly” — she continued to believe that “prayer is the only remedy for it, and however many little devils scurry around inside me, I shall cling to the rope God has thrown me in Jesus Christ, even if my numb hands can no long [sic] feel it.”

It reminds me of another Christian martyr of the 20th century, another non-violent resister against the forces of evil. “First and foremost,” Ed Gilbreath once wrote, Martin Luther King, Jr. was “a man of prayer.” (“God had been my cellmate,” that Baptist pastor said of his famous stay in a jail in Birmingham, Alabama.)

So convicted as I am that Christians once again must “renounce, denounce, and resist these death-dealing powers which organize and oppress our world,” Christian history teaches me that action must be rooted in prayer. (A theme that shows up in chs. 4 and 5 of The Pietist Option.)