Next month is a big one for Americans with an interest in World War I, since it marks the 100th anniversary of the U.S. belatedly joining that war. Here in St. Paul, for example, I’ll be taking a group of Bethel students to the April 8th opening of WW1 America, a major new exhibit from the Minnesota Historical Society that will even include a mural inspired by France’s Panthéon de la Guerre.

Then on April 20th, I’ll be giving a free lecture at the New Ulm (MN) Public Library, “Lest We Forget: WWI Memorials” (7pm). That’s a familiar topic for me, so I’m glad to get some new inspiration from a recent article by Jay Winter, the leading cultural historian of the Great War and the author of the best book on European commemoration of the war. Entitled “How to commemorate catastrophe,” the article appears in the newest issue of the alumni magazine for Yale University, where Winter is now an emeritus professor. (Alas, I didn’t get to take a seminar with him while I was there for grad school.)

You can read the full piece here, but a few key themes: 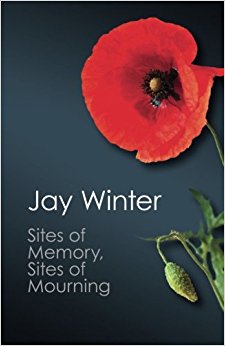 • The leaders had their own yawning gap, between their intentions and a resulting way of war “that was beyond their comprehension and that they were unable to control.” For example, Winter points to the commemoration of the disastrous landings at Gallipoli in two former British dominions: “…those who suffered at the cutting edge of the defeat were not only British and French troops, but also Australian and New Zealand troops; by shedding their blood and performing with unquestioned courage, they constructed a national myth, one worthy of two independent nations. Thus the apogee of empire—drawing troops from the Antipodes to Turkey—was the beginning of the end of empire.”

• I’ve been studying WWI for a long time, and even I find myself learning new things with every centenary-inspired article or book. For example, when we teach our travel course on WWI, we mention the way that the war uprooted millions: Belgian and French townsfolk and farmers who fled the Western Front, and Armenian survivors of genocide who tried to start a new life in European cities like Paris. But I hadn’t realized that retreating Russian soldiers slaughtered 50,000-100,000 Jewish refugees in 1915. No doubt with an eye to our present-day crisis, Winter cites a 2013 book on The Making of the Modern Refugee:

A new kind of continent was born in 1915, felicitously termed “Refugeedom” by historian Peter Gatrell, a place where there are no laws and survival depends on a whim or on the generosity of more fortunate people. Gatrell shows the profound destabilization of the Russian empire through massive population displacement from the very first months of the conflict. These refugees scattered everywhere. And there were many others. In the very first year of the war, one million Belgians—out of a population of eight million—left their country. In 1915, similar numbers fled the invasion of Serbia by the Central Powers. In 1917, it was Italians who fled en masse after the German and Austrian breakthrough at Caporetto. Refugeedom, created in 1915, grew rapidly in later years. It is with us still.

• What’s not said is as important here as what is. Winter suspects (rightly, it seems) that the current government in Russia will totally ignore the other centenary of 1917: the anniversary of Russia’s epochal revolution. “The date of October 25 in the old calendar, or November 7 in the new one,” argues Winter, “ought to be commemorated—not, as it was for 72 years, to mark the birth of communism, but to signal the moment when war bred revolution and counterrevolution at one and the same time.”

• And Winter suggests some commemorative connections that we might tend to ignore. For example:

On May 4, the Chinese delegation at the Paris peace talks received the message that Lloyd George, Clemenceau, and Woodrow Wilson had decided that China’s Shandong province, held by the Germans, would not be returned to China as the Allies had promised. Instead, it would go in the short term to Japan. This was a reward to Japan for the contribution of its naval power in the war; China, torn apart by civil war, had no such claims to make (though the provision of 150,000 Chinese laborers had given the Allies much-needed help in the logistical war). The decision also exposed the hypocrisy of the Allied commitment to self-determination. When Wellington Koo, one of the Chinese delegates in Paris, cabled home the news, he did not receive an answer for several days. The reason was that Chinese students, on hearing of the decision, burned down the telegraph office and much else in Beijing as well. They went on to form the May 4 movement, out of which the Chinese Communist Party emerged. What a day to mark: the day that Woodrow Wilson did his bit to create the Chinese Communist Party.

• Winter closes by revisiting a theme he has introduced before: that museums and commemorative sites have become “the cathedrals of the twenty-first century… While secularization has taken its toll on our churches, the sacred has not vanished from our field of vision. The sacred has simply moved out of the churches and inhabits other public spaces.” Which, as I’ve argued before, poses interesting questions for those of us who still encounter the sacred in private spaces of worship…

Altogether, Winter’s article is a helpful introduction to the war and how it has been remembered, and a good prompt for me as I prepare to address commemoration next month.