So how can Christians and churches protect themselves from the spiritual dangers that I wrote about earlier this week?

You won’t be surprised to learn that I think it’s got to start with looking to the past. But if it’s too self-serving for me to say that, then take it from a non-historian:

The inner lives of many have been thrown into spiritual disequilibrium. Even while we search for political responses, and may find encouragement in the unprecedented mobilization of the millions marching on every continent, we need to discover the roots for resistance and creative public engagement that can be spiritually sustained for the long run. 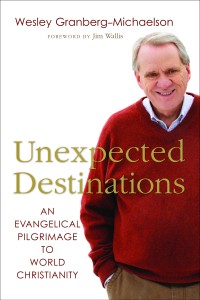 That’s author and activist Wes Granberg-Michaelson, introducing “5 Spiritual Survival Strategies” for readers of Sojourners. #1 is to recover the importance of memory in Christian faith and community.

Memory is tied to the identity of the people of God. Continually, the people of God are reminded of who they are by recounting the sweep of salvation history. And our memory becomes attached to this version of history because our lives find their value and purpose there.

Thinking historically is already an “unnatural act,” but Granberg-Michaelson points out that technological change has made remembering even more difficult “The flow of news, information, and communication in our society combats the power and purpose of memory. We are riveted to the present, where news cycles saturated with fresh content create historical amnesia, daily. Headlines, whether in tweets, from blogs, or established news sites, attempt to define the current and most important story.” (And no one understands this better than our media-savvy commander-in-chief.)

Not just “riveted to the present,” we’re also tempted to think too much of the future, which (as C.S. Lewis’ Screwtape advised Wormwood) “is unknown to [humans]… in making them think about it we make them think of unrealities.” So in part because the past is known to us, however imperfectly, thinking of it helps combat our tendency towards the emotions Lewis attached to the future: “fear, avarice, lust, and ambition.”

But Granberg-Michaelson points to a larger significance of remembering:

…memory — specifically our religious memory — is what keeps us grounded in our story in the face of other competing narratives. Every administration in this town tries to drive a narrative explaining both social reality and the salvific nature of the president’s leadership. With the Trump administration, this has begun in particularly stark ways, telling a story of national carnage that can be salvaged only by asserting defiantly our superiority and self-righteousness, defending ourselves at home and abroad against any who present a different vision.

In the face of that particular narrative, for example, a congregation like my own should remind itself that it was founded by people not all that different from the refugees and other immigrants most threatened by this administration.

As Glen Wiberg wrote in his centennial history, “Those few and poor” Swedish immigrants whose humble Bible study in a Minneapolis home eventually grew into Salem Covenant Church “had been carried to this country on the greatest tide of migration the world has ever known…. seeking a better life economically while also looking for a place of opportunity where they could exercise values of work, home and—in many cases—church with a greater sense of freedom.”

But even long after Salem’s people ceased to be the “few and poor” and became “the many and rich—at least by immigrant standards,” they exhibited a continuing concern for new populations carried to America by new tides. In 1975, Salem agreed to sponsor a Vietnamese family fleeing the end of their country’s long civil war, “to provide for such things as shelter, clothing, food, employment, transportation, and above all else, Christian friendship and understanding.” The first family of Salem-sponsored refugees arrived that December, with another coming a year later and a third in 1980. “As with so many Swedish immigrants,” Glen concluded, “the stories of new immigrants from Southeast Asia are stories of hard work, ambition to succeed, the overcoming of obstacles, and, for nearly all, remarkable achievements in both personal and familial fulfillment of the American dream.”

As Glen so eloquently puts it, such “odd bits and pieces of memory are the fragments which make ordinary places sacred. It is what makes history so important in knowing who we are as people of God and as persons in search of our identity.” But if we lacked this memory, we would be tempted to lose sight of who we were and are still.

Without fragments like those in Glen’s book to ground the people of my congregation, our Christian identity as “aliens and exiles” could easily disappear, swept away by that amnesia-inducing flow of information or overwhelmed by a powerful counter-narrative of fear and exclusion. Without a living memory of its origins in one wave of migration, a congregation that was then still primarily Swedish-American could not have responded to the plight of Southeast Asian refugees. And Glen could not have written this remarkably insightful, inspiring assessment of that effort:

A church of immigrants, who from its beginnings knew first-hand the struggle for survival and the ways of caretaking, could not forget, pass by, nor make invisible the new immigrants entering the American scene.

May it be so again. May our memory as a church of immigrants make us again a church for immigrants.