Our friend Stacey Hunter Hecht died a year ago today. I promise this won’t become an annual tradition, but this once, I thought I’d repost what I wrote about her.

In the first four months of this year, three of my closest kith and kin were diagnosed with breast cancer. As we near the end of 2015, I’m happy to report that two of them are doing very well. [Ed. – They are still as we near the end of 2016.] But yesterday afternoon, my friend Stacey Hunter Hecht lost her battle.

I’m still in enough shock that I’m not sure I have anything coherent to say. But in the hope that what little light has penetrated the darkness of my grief might be a balm to anyone else, or an encouragement to revel in a moment of friendship today, let me share a couple of memories. We’ll start in March 2003…

We met on my first afternoon interviewing at what was then still Bethel College. About five or six years into her own time at Bethel, Stacey was then serving on the Appointments Committee. One of the most effective committee members I’ve ever known, she surely asked good questions about my views on teaching, scholarship, and what Christianity had to do with those activities. But about 30 or so minutes in, Stacey clearly had made up her mind and was ready to move on to next steps: where I should live when I moved to the Twin Cities, where I should go to church, where I should take my car for repairs…

Again: first afternoon of my interview. And I had another job offer on the table.

In the end, I did come to Bethel. And while I don’t live in Falcon Heights or go to Como Park Lutheran, I did marry a Lutheran and we live less than a mile north of the Hechts. (And we do take our cars to Stacey’s mechanic.) More importantly, though I could hardly have realized it at the time, that interview marked the beginning of my tenure in a club made no less remarkable for its enormous size: the friends of Stacey.

Six months later: Asked to give an inaugural address as the newest member of the History faculty, I chose to share reflections on what it was like coming from the Ivy League to a Christian college. I can only hope that what I said was only mildly pompous. But fortunately, my chief memory of that event was not my speech, but Stacey and one of her students spontaneously acting out the scene from Spinal Tap in which the band tries and fails to harmonize a version of “Heartbreak Hotel” at Elvis’ grave.

It was the first of many times that Stacey helped me cope with the absurdity that’s bound to crop up in any community — but especially one filled with people almost as earnest as me.

Viewed from the aftermath of incomprehensible tragedy, such memories can seem too trivial to bear recalling. But it strikes me that what seems so slight is actually appropriate to the peculiar nature of that love we call friendship.

“Friendship,” wrote C. S. Lewis, “is unnecessary, like philosophy, like art, like the universe itself (for God did not need to create).” Unique among his Four Loves, Lewis’ version of Friendship — something deeper than Companionship — was distinguished by its “exquisite arbitrariness and irresponsibility,” its needlessness. It is not food or water or shelter or breath. But unnecessarily, arbitrarily, friendship supplies another of Lewis’ favorite themes: delight.

“It has no survival value,” concluded Lewis, “rather it is one of those things which give value to survival.” To have a friendship, therefore, is to be lavished with abundance: to be given something which is neither necessary nor dispensable.

Which sounds to me an awful lot like grace.

Not that grace has always been in plain sight this past year.

In most of our visits during her illness — though not, perhaps significantly, when I saw her one last time yesterday morning — conversation with Stacey eventually turned to struggles of faith. Why would a good, just, sovereign God allow someone to be cut down in the prime of their life, and to suffer so much pain in the process? Why would He deprive Rosie of her mother, Steve of his wife, and hundreds of us of our friend?

“Why,” Lewis asked in another, more gut-wrenching of his books, “is He so present a commander in our time of prosperity and so very absent a help in time of trouble?” Like Lewis, agonized by the loss of his wife, it’s “Not that I am (I think) in much danger of ceasing to believe in God.

The real danger is of coming to believe such dreadful things about Him. The conclusion I dread is not ‘So there’s no God after all,’ but ‘So this is what God’s really like. Deceive yourself no longer.’

As a Lutheran (more technically, what she called a “Presby-Lutheran”), Stacey may well have believed with Martin Luther that there is a hidden dimension of God. (Or, as Lutheran theologian Steven Paulson more disturbingly notes, “It is not so much that God cannot be seen that concerns Luther, but that God actually and actively hides.”)

But right now, I choose to focus more on how God reveals himself — above all, in the person of his Son. “If you know me,” said Jesus, “you will know my Father also” (Jn 14:7).

Crucially, he said that to people who were not just his disciples, his followers, but his friends: “I do not call you servants any longer, because the servant does not know what the master is doing; but I have called you friends, because I have made known to you everything that I have heard from my Father” (Jn 15:15).

This is no small thing. Jesus calls his disciples “friends” as an elaboration on a preceding commandment, “that you love one another as I have loved you.” Which itself elaborates on something else: “If you keep my commandments, you will abide in my love….”

To love our neighbors (and to abide in God’s love), we must befriend. Indeed, my denomination holds that mission — the work of God in this world — is itself to be understood as “the befriending of others, and all that God has created, in the name of the One who first befriended us.” If so, then Stacey — whose many friendships spanned religions, languages, cultures, and political parties — is one of the great missionaries I’ve known.

The risk of befriending, of course, is that we open ourselves (without “necessity”) to pain. If Lewis is right that friendship helps “give value to survival,” then the death of a friend strips a layer from our life. Jesus knew this full well, he who wept at the death of Lazarus and the grief of his sisters. He who felt forsaken by a hiding God.

He who rose again. 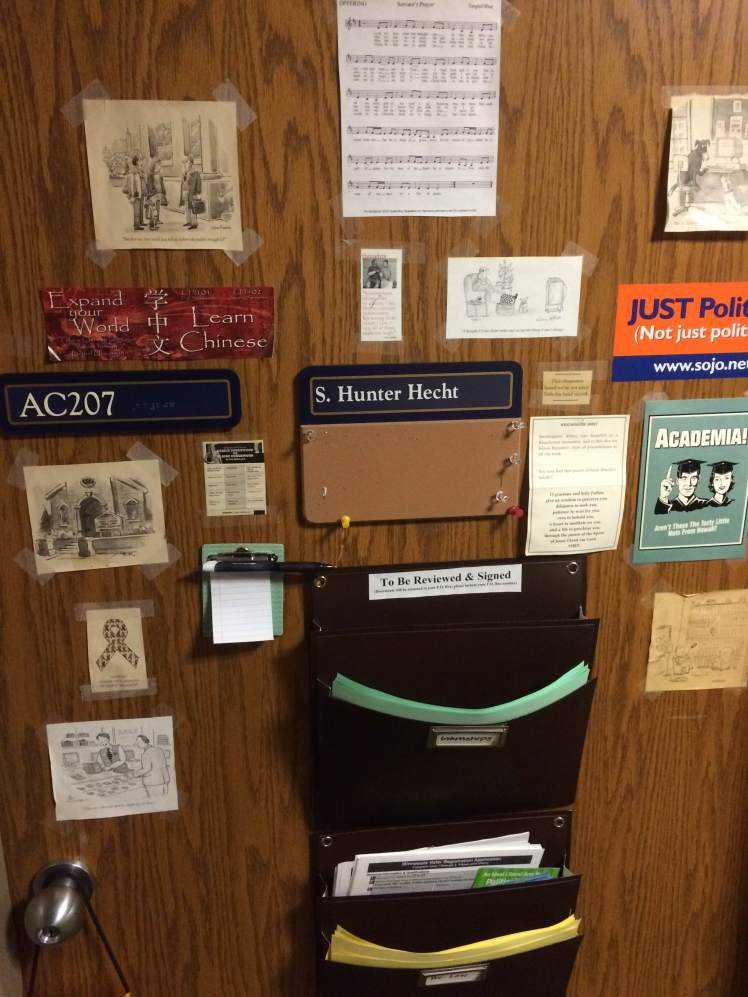 Stacey’s illness haunted the talk I gave earlier this fall to open Bethel’s semester, in which I reflected on the meaning of the Crucifixion for the Body of Christ:

Now, death is real. And it’s unjust, cruel, and rapacious….

We’re experiencing it in our community: one of our colleagues died of cancer this summer; other friends on and off this stage are battling the same disease.

But I spoke also of the Resurrection. “The most reasonable response to such a precarious existence is fear,” I continued. “But there is nothing reasonable about the resurrection, and so we hope against hope.” Contemplating the possibility of Stacey’s death had deepened my conviction that the Apostle Paul was right, that those who follow Jesus Christ “may not grieve as others do who have no hope” (1 Thess 4:13).

But that was easier to say then, when Stacey’s death was (like everyone’s) in the uncertain future, than now, when it has entered history.

So please pray for us: that we may grieve Stacey as people of hope, as friends who love because we were first loved by the Friend who overcame death itself.

Peace be to my friend’s memory.