On Monday I shared a few things that I’m enjoying right now. I left one off the list in order to come back to it today:

Yes, among the many other blessings of this sabbatical — time with my wife and kids, time with my parents, time to write and read — I get to visit the most visited site in the entire National Parks system as often as I want. We’re living in a cabin located just off the 469-mile Blue Ridge Parkway, “America’s Most Popular Drive.”

Though first proposed in 1906, planning halted because of the First World War. But the idea revived in 1933, after Franklin D. Roosevelt enjoyed a trip on Skyline Drive. Congress agreed to a federal-state proposal for a parkway linking the new Shenandoah and Smoky Mountains national parks, which Parkway historian Anne Mitchell Whisnant notes had just been created “as part of an effort to bring national parks nearer to population centers of the eastern United States.”

Construction of what was initially called “The Scenic” began in 1935, with a twelve-mile stretch spanning the Virginia-North Carolina border. By 1936, the road had been renamed the Blue Ridge Parkway and placed under the administration of the National Park Service (NPS).

The project was energized by the government’s response to the Great Depression. FDR’s interior secretary, Harold Ickes, envisioned “The Scenic” as a massive public works project. (Indeed, the WPA played a role in its construction.) Cities lobbied to be included on the route, hoping that it would provide jobs for unemployed workers. Much of the labor came from members of the Civilian Conservation Corps, such as the African American workers at the camp in Pipers Gap, Virginia.

A rustic shelter at Cumberland Gap, just off one of the Parkway’s many, many hiking trails

WPA bridge on the Parkway near the VA-NC border

Not far from Cumberland Gap is the Blue Ridge Music Center, where bluegrass and string bands play every afternoon. When we visited, we all got invited up to sit in on a loose cover of “This Little Light of Mine”

The Parkway is very much a product of its time, reflecting the preferences and anxieties of Americans who had both embraced city life and automotive culture and feared the erosion of the country’s natural and human history. As NPS placards at Cumberland Gap, the oldest campground on the Parkway, explain:

When early Parkway planners began laying out the route, these mountains were not pristine. Poor farming practices, erosion, logging, and forest fires had taken a toll on their natural beauty. Yet these visionary planners placed the route with sensitivity and creativity, and initiated practices that would restore the land and preserve the scenery….

The fundamental principle of the Blue Ridge Parkway is one of simplicity. The road should not draw attention away from the natural setting. Planners paid extraordinary attention to every detail—even the smallest elements like rock walls, bridges, and steps—so that each would appear to be part of the environment.

“Appear to be” is a key phrase there. The Parkway is not meant to capture a historical snapshot of the Blue Ridge as it looked in the years just before World War II. Instead, it’s a mix of preservation, restoration, and even relocation. For example, our kids enjoy visiting Mabry Mill (completed in 1942), which mostly evokes rural Appalachian industry of the early 20th century — but also includes a much older log cabin from nearby Galax rebuilt in place of the actual house that the mill owners inhabited. 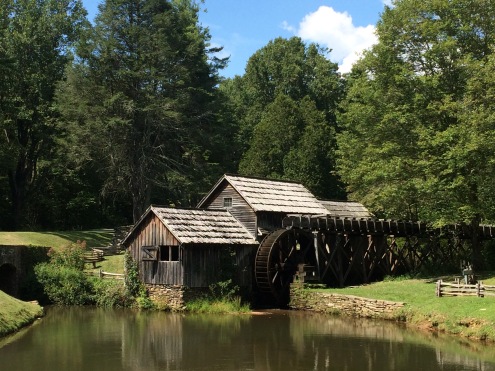 Like many NPS sites on the Parkway, Mabry Mill has rangers who regularly host school groups and give educational demonstrations

Bluemont Presbyterian Church near Fancy Gap, VA – one of five “rock churches” built in the Parkway area by Bob Childress

Childress was one of the thousand children delivered by a local midwife named Orelena Puckett, between the late 1880s and her death (at age 102) in 1939. Puckett Cabin features one of the rail fences that are a hallmark of the Blue Ridge Parkway

As serene and idyllic as it is, the Blue Ridge Parkway has not been free of conflict. Eminent domain was invoked to let Virginia and North Carolina buy up over 40,000 acres, often from families that had been farming the land for generations. Not all landowners and local businesses were happy with the non-commercial status of the parkway.

But Whisnant finds that only North Carolina’s Eastern Band of Cherokee Indians offered well-organized opposition. While they were interested in the potential benefits of tourism, many Cherokee were not pleased with NPS plans for the road: “The park highway will not benefit us, and will take out of cultivation much land needed by the Indians,” warned a 1935 petition. Tribal activist Fred Bauer believed that the Bureau of Indian Affairs meant to use the Parkway to

remold the Cherokees into the Bureau notion of real Indians, with culture and traditions and glamour…. We do not want you to pass through without seeing more than a feathered ‘trading post Indian,’ and go back to New York or Boston believing that we Cherokees are living that old life. We live much the same as our white neighbors, and this you will never see from the Blue Ridge Parkway. (quoted in Whisnant, Super-scenic Motorway, pp. 199-200)

His wife Catherine (a white Cornell graduate) asked if the Parkway’s designers “contemplate celebrating the 100th anniversary of the GREAT REMOVAL by another GREAT REMOVAL?” She wrote to Eleanor Roosevelt for help.

For five years federal and state officials attempted both compromise and intimidation. In the end, Fred Bauer lost a 1939 race for tribal chief, and the following year the tribal council agreed to a revised route. Cherokee leaders later took part in the dedication of that segment of the road.

Whisnant notes that Bauer’s concerns may have been well-founded, since “almost all tourist operations at Cherokee have traded on identification of Cherokees as Indians — either as generalized Hollywood Indians in brightly colored, Plains-style ‘chiefing’ outfits or more specifically as Cherokee Indians depicting eighteenth-century life at the Oconaluftee Indian Village. Neither version of Indianness embraced the complex economic, political, social, and cultural realities of the Cherokees’ lives in the mid-twentieth century” (p. 210).