Last week my family completed a rambling journey and arrived safely in the Blue Ridge Mountains, where we’ll be spending my fall sabbatical as I continue work on a couple of writing projects. Believe it or not, this will be my workspace until December: 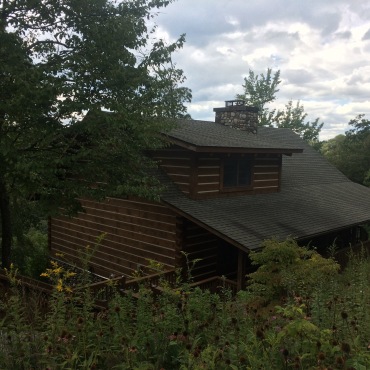 As we passed through Iowa, Illinois, Indiana, Kentucky, and West Virginia, I was curious what evidence we’d see of the presidential election. Until the last stage of the journey, we stuck to US highways and other back roads, so we passed an untold number of houses, businesses, farms, and other ideal spots for political advertising. Mostly, I was struck that we saw fewer signs than usual — and far more for local and state than for national candidates. But while I spotted nine or ten ads for Donald Trump (almost all of them, interestingly, in Illinois), I didn’t see a single one naming his Democratic opponent…

…until we rounded a bend on US-11 and saw a blue sign emblazoned with a big “Hillary.” We got closer… and realized that the message was actually “Hillary for Prison.”

And so began our election-year stay in southwestern Virginia. FiveThirtyEight currently gives Clinton an 82% chance of taking the commonwealth’s thirteen electoral college votes. But we happened to relocate to a Trump stronghold.

In the Virginia Republican primary this spring, the eventual GOP nominee only narrowly defeated Sen. Marco Rubio (34-31). But in the county where we’ll be living, almost 54% went for Trump (almost tripling the share for the runner-up, Sen. Ted Cruz). All of its neighboring counties also went for Trump, all by at least 18 points — and most by 25-30.

It’s quite a contrast to Minnesota, a solid blue state whose Republicans delivered Rubio a rare victory. So while we’re down here, I thought I’d occasionally post some “Dispatches from Trump Country.”

“Might they,” wondered Darryl Hart last month of anti-Trump historians like me, “even imagine through empathy what it feels like to find Trump attractive?” I think that’s a fair challenge. So as we get a chance to talk to folks around here and consume local TV, radio, and newspapers, I hope to better understand what’s motivating support for a candidate that I’ve strongly opposed.

Alongside these interactions and observations, I’m also looking forward to reading J.D. Vance’s well-timed memoir, Hillbilly Elegy. The part of Appalachia where I’m sitting isn’t quite as impoverished as the Kentucky county where Vance’s family hails from, but many of the economic, cultural, educational, and social issues are similar.

6 thoughts on “Dispatches from Trump Country”