During our travels over the holiday weekend, we visited a church and witnessed an odd, telling moment. Looking for a negative sermon illustration at one point, the pastor spontaneously mentioned “the presidential candidate who says he doesn’t need God’s forgiveness.” As best I can recall, the pastor didn’t even say Donald Trump’s name, but he clearly thought he had crossed some kind of homiletical line. Blushing, he stopped the sermon and told his congregation that he regretted making the reference.

Again, I was a visitor, so I don’t know the particular dynamics here. The pastor didn’t explain why he regretted saying what he did. But I suspect that a fair number of pastors, priests, and other Christian leaders are uncertain just how to respond to the Trump candidacy. Many who, like me, find it hard to shake the feeling that they have a moral imperative to resist Trump nevertheless cringe at the thought of bringing “politics into the pulpit.”

I’ve already offered one post’s worth of unsolicited, Trump-related advice to clergy (“…do the work of political theology” and help parishioners “think through the implications of following a Christ who is Lord and King“) But let me push my luck and suggest three ways the Church can talk about Donald Trump without getting distracted from its mission. (Perhaps a fall sermon series…?)

Which presidential candidate could have less than 10% of his statements rated “True” or “Mostly True” by an independent fact checker and yet repeatedly have people vote for him because he “tells it like it is”?

Why a “reality” TV star, of course.

Trump calls his rhetoric “truthful hyperbole.” If not “truthful,” political scientist Elizabeth Markovits does find his way of speaking to be “hyper-sincere“:

When a politician is hyper-sincere, the world can be reduced to simple truths. It’s a view of the world as a clearly knowable, not-all-that-complex place ruled by self-interest and power. And the more hyper-sincere the politician, the less thought needs to go into his language. Why bother with fancy wordplay? Isn’t that what you use when you’re trying to hide something?

Which doesn’t make it any less damaging to democracy. Drawing on research on political sincerity that takes her back to the ancient world, Markovits compares Trump to Cleon, an Athenian politician from the time of the Peloponnesian War: 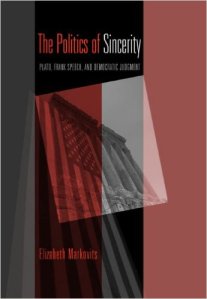 Thucydides immortalized Cleon as using straight talk as just another rhetorical device used to distract citizens from basic democratic values. For instance, Cleon called on Athenian citizens to authorize the massacre of all the men on the island of Mytilene in retaliation for their rebellion against Athens. That’s more extreme than what we’ve heard from Trump. But both ask their fellow citizens to do things that go against the democratic values of equality and openness and also against their own self-interest – all in the service of righteous anger and in an attempt hold onto their status as the most powerful military force in their world.

Cleon’s outrageousness was seen as a sign of his “parrhesia,” a Greek term for frank speech. To speak frankly meant to speak openly and honestly, to give advice to the city without fear or shame. But parrhesia became its own form of spin over time in Athens, a way for demagogues like Cleon to pander to the citizens, reducing a complicated world to black and white, disparaging opponents and increasing their own hold on power.

But if Americans crave a leader who will “tell it like it is,” then perhaps there’s hope here for the Church, if only it would “speak openly and honestly” and “give advice to the city without fear or shame.”

Fortunately, to do this, the Church doesn’t need a new play book. #Trump2016 might be rewriting history and political science texts as we speak, but there’s nothing about that phenomenon that’s so novel or unusual that the Church isn’t prepared to respond to it. For Scripture prescribes for it modes of “frank speech” other than demagoguery, ancient ways of “telling it like it is” that are completely relevant in modern times.

Faced with people who are like the “rebellious children” of Isaiah 30, asking to be told “smooth things” and trusting “in oppression and deceit,” the Church must not “prophesy illusions” but instead speak the word in such a way as to contrast how it is — and how we want it to be — with how it should be. While the frank speech of the demagogue is a tool of the powerful, the frank speech of the prophet cries out for the powerless. While the narcissistic leader cannot tolerate criticism, the prophet cannot tolerate injustice.

For example, even as the Church should listen to the anxieties of Trump voters who feel themselves adrift in an era of rapid change, it should not hesitate to rebuke the racial animus and resentment that correlates strongly with Trump support. The Church is indeed “Called to Resist Bigotry” and it should echo the language of that manifesto:

…instead of repenting from America’s original sin of racism, Donald Trump is exploiting the legitimate economic grievances of marginalized white Americans with false and ugly racial blame.

Trump’s personal attacks on America’s first black president as illegitimate and not one of “us,” his false accusations against African Americans, his vicious attacks against Mexicans and inflaming the fear of immigrants more broadly, his claim that most Muslims hate America and his call to “ban” them from our country, his advocacy of torture and the killing of terrorist’s families and children – are all of deep concern to many of us as religious leaders. To all that falsehood, hatred, and violence we must say no, in defense of all of God’s diverse children.

“We can do no other,” those writers concluded, invoking the apocryphal phrase appended to Protestant reformer Martin Luther’s famous refusal to recant his beliefs at the Diet of Worms in 1521. Luther’s appeal to a “conscience captive to the Word of God” is a powerful one, and it can sustain the courage of prophetic movements like Germany’s Confessing Church, whose moral resistance to Nazism helped to inspire the “Called to Resist Bigotry” statement.

But while its authors allude to that heritage and often use the word “confess,” they never make a confession of their own shortcomings.

And that’s as dangerous as failing to speak prophetically. For “[i]f we say that we have no sin” — or, perhaps, if we leave unsaid that we sin — “we deceive ourselves, and the truth is not in us… If we say that we have not sinned, we make him a liar, and his word is not in us” (1 Jn 1:8, 10). I think that danger is particularly acute when responding to Trump. Precisely because so much of what he says is so abhorrent, he becomes a mirror in which we start to see ourselves as righteous.

Not that this is easy, as I learned again last year when I had to confront my own blind spots in a podcast conversation about racial diversity. But whether through corporate liturgy, mutual accountability, pastoral counseling, or other practices, the Church must help us to speak honestly about the lies we tell ourselves. It must prompt us to “confess [our] sins to one another” (Jas 5:16).

For “[i]f we confess our sins, he who is faithful and just will forgive us our sins and cleanse us from all unrighteousness” (1 Jn 1:9). Which leads us to the primary way that the Church tells it like it is: by proclaiming good news.

Of course, we quibble about what’s at the heart of the Gospel (and it’s worth remembering that the first time the New Testament records Jesus engaging in this kind of speech, he starts with the word “Repent”), but I would emphasize three dimensions of Christian proclamation.

First, against the idolatry of a demagogue who promises to make America great again, the Church follows the instructions of Jesus Christ to his first disciples: “As you go, proclaim the good news, ‘The kingdom of heaven has come near'” (Mt 10:7). We proclaim the coming of a kingdom that belongs to the poor and persecuted, not an empire run by the wealthy and powerful. Not an empire of greatness, but a kingdom like “the smallest of all seeds,” whose Lord is no strongman, but a suffering servant. And of his kingdom — unlike every empire — “there will be no end” (Lk 1:33).

Second, against the fearmongering of a demagogue who promises to keep us safe from people who pose no threat, the Church joins the apostle Paul in reminding Christians that they are people of hope:

But knowing that the Church has itself betrayed this kingdom and this hope as often as it has proclaimed them, more important still is the Bible’s least likely mode of “telling it like it is.” If we proclaim the good news of Jesus Christ, then we proclaim the grace of a God who loves and forgives us, a reality that few truly want to hear.

“Grace,” wrote Philip Yancey, “is Christianity’s best gift to the world, a spiritual nova in our midst exerting a force stronger than vengeance, stronger than racism, stronger than hate” (What’s So Amazing about Grace?, p. 30). It is also, he admits, a “scandal.” Requiring the “unnatural act of forgiveness,” grace defies what we think and feel to be true and just.

It’s evident that there’s no place for grace in the worldview of someone who doesn’t think he needs God’s forgiveness. But perhaps we’re not all that different. I suspect that most of us are at least somewhat like the prophet Jonah, who resisted God’s call to prophesy to Nineveh not because he was afraid to call out sin, but because he couldn’t countenance the possibility of grace: “That is why I fled to Tarshish at the beginning,” the prophet angrily prayed to God, “for I knew that you are a gracious God and merciful, slow to anger, and abounding in steadfast love, and ready to relent from punishing” (Jon 4:2).

But if all the Church had to offer were prophecy and confession, it would not be the Church. It would not be telling it like it is, according to the upside-down kingdom logic of a gracious God who brings new life out of the most unlikely of circumstances.

Here I can’t improve on how my pastor and co-author, Mark Pattie, summed up the Gospel in one of the podcasts we recorded this spring: (the one, coincidentally, in which I digressed into a very early version of the ideas fleshed out in this post)

…the ministry of the church and certainly our preaching is so shallow and devoid of the power of God when we are not engaging with the Gospel that tells us, “You are beloved,” that “You are called by God,” that “I am with you” and that “I work through even broken vessels.” And if we can believe that Gospel, then we can begin to preach, then we can begin to teach… That is what we have in the Church to proclaim, this Gospel of God’s love that can transform our hearts and our minds and our relationships… The only real thing we have to offer, and it’s the best thing going… is this Gospel of the living God whose Word and whose Spirit is effective and can accomplish abundantly far more than we can ask or imagine…

So in the end, the Church should resist Trump the only way it can: by being the Church. Speaking prophetic words of justice, prompting the confession of sins, and proclaiming the good news of Jesus Christ, it should tell it like it is.

8 thoughts on ““Tell It Like It Is”: How the Church Should Respond to Trump”