So, to complete the thought that ended yesterday’s post, is Union University president “Dub” Oliver right that “marriage is at the heart of the Gospel?” I don’t think so, and neither does theologian Kyle Roberts:

The conservative Christian rhetoric about “biblical marriage” has, for quite a while now, struck me as close to idolatrous if not exactly that. If marriage is “the heart of the gospel” why didn’t Jesus marry? If you want to answer that Jesus did marry, because he is the “bride” of the church (his groom), then well…that’s hardly anything like “traditional heterosexual marriage.” Or, why didn’t Paul marry? If you want to answer that he did marry (as some scholars suggest), why didn’t he talk about his marriage and uphold it as a model to follow?

Like me, Kyle thought that the very Christian unity that Union was breaking “is actually quite closer to reflecting the ‘heart of the gospel’ than is any particular moral stance on marriage (Jn 17:21).”

But perhaps we’re parsing things too finely. Are we getting too worked up over Oliver’s claim that marriage is “at the heart of the Gospel”?

If not, then a follow-up question logically suggests itself:

What is at the heart of the Gospel?

That’s the biggest type I have available in my WordPress toolbar because the question couldn’t be more important.

I can’t believe that Oliver was simply being sloppy with language: his rhetorical choice to place (a particular understanding of) marriage “at the heart of the Gospel” is meant to justify separation from the two Mennonite institutions, Goshen and Eastern Mennonite. By implication, he is saying that they have departed from the Gospel itself. So I assume he would reject my argument that Union itself is doing terrible damage to Christian witness by rashly and perhaps unnecessarily breaking the unity of a Christian fellowship — he is broadly suggesting that Eastern Mennonite and Goshen are no longer “Christian” colleges. (Certainly not “evangelical” colleges, since whatever else they are, evangelicals are those who proclaim the Evangel, the Gospel.)

One commenter on the blog’s Facebook page thought we were making too much of this — in his mind, “Gospel” is synonymous with what’s of “primary” importance and what’s “clear” in Scripture. (That which, to hearken back to Mark Bruce’s widely read guest-post on sexuality, is not “uncertain.”) I disagreed: “For example, I think Scripture is pretty clear that we ought not to steal, but that law is not ‘the Gospel.’ To place marriage – however clearly defined in Scripture — ‘at the heart of the Gospel’ displaces who is actually at the Gospel’s heart.” In other words, my assumption is that any Christian understanding of Gospel must be Christo-centric. (And like Kyle, it seems to be passing odd to place marriage alongside an unmarried Christ at the Gospel’s heart.)

And if you think that only a Pietist would say that the person of Jesus Christ and our experience of him lies “at the heart of the Gospel,” consider this, from one pope quoting another:

I never tire of repeating those words of Benedict XVI which take us to the very heart of the Gospel: “Being a Christian is not the result of an ethical choice or a lofty idea, but the encounter with an event, a person, which gives life a new horizon and a decisive direction”. (Francis, Evangelii Gaudium (that is, “The Joy of the Gospel”) quoting his predecessor’s introduction to Deus Caritas Est)

Oddly enough, the National Association of Evangelicals doesn’t even use the word “Gospel” in its statement of faith, but I suspect most evangelicals would use its language of “salvation of lost and sinful people” or “[Jesus’] vicarious and atoning death” if pressed to articulate what lies “at the heart of the Gospel.”

But some evangelicals think that “the Gospel,” while surely christological, is about more than salvation. Scot McKnight, for example: 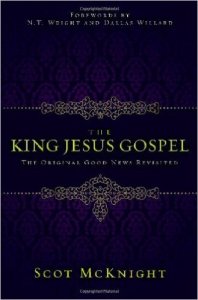 …the soterian (Greek word for salvation) gospel is a message of how to get saved from sins and how to be properly related to God. In brief, the apostolic gospel makes the Story of Israel and the Story of Jesus first, and not my personal salvation, and makes personal salvation second. I distinguish the two because our current models of the gospel — and here I ask that we consider what we tell people who we think are not Christians — do not sufficiently pay attention to how the New Testament talks about the gospel.

The Gospel Coalition defines “the Gospel” in these terms:

We believe that the gospel is the good news of Jesus Christ—God’s very wisdom. Utter folly to the world, even though it is the power of God to those who are being saved, this good news is christological, centering on the cross and resurrection: the gospel is not proclaimed if Christ is not proclaimed, and the authentic Christ has not been proclaimed if his death and resurrection are not central (the message is: “Christ died for our sins . . . [and] was raised”).

Or you might find some inspiration in the Christian Century‘s 2011-12 series of blog posts in which twenty-three authors tried to sum up the Gospel in seven words. For example, Lutheran pastor-writer Nadia Bolz-Weber suggested “We are who God says we are” and church historians Grant Wacker and Martin Marty proposed, respectively, “Christ offers new life for all” and “God, through Jesus Christ, welcomes you anyhow.”

Your turn now: What, in your words, is at the heart of the Gospel?

8 thoughts on “If Not Marriage, What Is “At the Heart of the Gospel?””