• One Baptist political scientist paid tribute to another, as G.W. Carlson celebrated the legacy of Walfred H. Peterson.

• Even more interesting than anything that I put in my post about changes in Winter Olympic records over time was this nugget passed along by a former student: when Dutch speed skater Sven Kramer set a new record in the 5000m this year, his average speed was over 7 kph faster than that of the winner in the 500m race in 1924 (American Charles Jewtraw, who still enjoys the distinction of being the first gold medalist in the history of the Winter games).

• They didn’t seem to lure that many readers, but I’m pretty pleased with the title and featured image of my post on the history of odors.

• But the best post of the week came from Jared, modeling for us how to think historically and Christianly about technological change.

• What’s an Anabaptist? Scot McKnight starts by sketching one famously influential response: Harold Bender’s “Anabaptist Vision.” (About which I’ve written a fair amount, though mostly focused on the place of Pietism within that vision.)

• Last week Blue Like Jazz author Donald Miller made waves when he admitted that he doesn’t attend a local church regularly. Jonathan Storment’s was one of many thoughtful but critical responses, but see also Miller’s response to the hubbub.

• I didn’t get a chance to write much about the sudden dismissal of Edward Blews, who lasted mere months as president of the evangelical Council for Christian Colleges and Universities (CCCU), but the story is developing, and getting uglier.

• Yet one more reason to conclude that MOOCs aren’t going to be the game-changer their apostles claim them to be: they can’t provide the social capital that’s an enormous benefit of the traditional college experience.

• My friend Kurt Peterson should really write a book about higher education. But until that happens, settle for the ten reflections he’s been sharing on Facebook (now collected and posted at his new blog).

• Is atheism irrational? Enjoy the chance to watch Alvin Plantinga’s mind work, in this conversation with Gary Gutting. 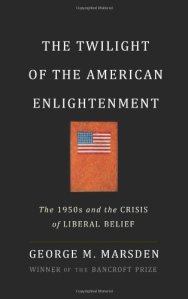 • Concluding his enthusiastic review of George Marsden’s new book on The Twilight of the American Enlightenment, Jonathan Den Hartog suggests reading it alongside Molly Worthen’s acclaimed book on evangelicalism… Chris Lehmann gave an example of what that might look like.

• And if you watched the national contingents parade at those ceremonies and wondered, “Why are some of these countries’ flags so unattractive?”, then this is the post for you.

• I’ll watch the second season of the Americanized House of Cards, but regular readers know that I’m likely to agree with critic Alan Sepinwall’s assessment: “It wants so much to be An Important Drama (despite having a fairly shallow take on both government and its main character) that it’s far more dour than a show about a conniving political mastermind should be.” But if you are a fan, do yourself a favor and watch the British original — as James Fallows puts it, comparing the US and UK versions, “It’s like a Judd Apatow movie vs. the bottomless bleakness of Evelyn Waugh….”

• Meanwhile, I’m mildly enjoying the fourth series of Downton Abbey much more than I expected (after the silliness of numbers two and three), though I’m not as big a fan as conservative scholar Peter Lawler.

• But even better from a First Things writer is Dale Coulter’s encouragement for evangelicals “to differentiate between pop culture as folk culture and pop culture as mass culture. At its best, Evangelicalism seeks to preserve and foster folk culture and the critics of Evangelical piety need to recognize this strength, because it is through the ongoing propagation of folk culture that the disenchanting effects of modernity will be overcome ultimately. I say this knowing full well that the strong temptation within Evangelicalism is to traffic in the forms of mass culture, and it has succumbed to that temptation on more than one occasion.”

• I’m not the world’s biggest Settlers of Catan fan, but big enough to find this profile of the game’s inventor, Klaus Teuber, utterly fascinating.

• So Bruce Springsteen and I have something in common.