Sixty-five years ago yesterday, the United Nations General Assembly gathered in Paris’ Palais de Chaillot to approve the Convention on the Prevention and Punishment of the Crime of Genocide. Australia’s Herbert Evatt, presiding over the General Assembly, called the moment “an epoch-making event in the development of international law” and enthused that the UN was acting “on behalf of universal conscience as embodied in this great organization.” 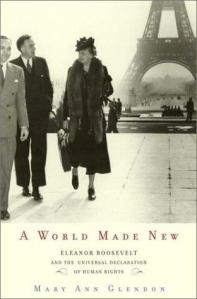 Then at 8:30 that night, the Lebanese intellectual Charles Malik introduced a second epoch-making piece of international legislation: the Universal Declaration of Human Rights (UDHR). “Thousands of minds and hands have helped in its formation,” said Malik, who called the Declaration’s drafting “the first time the principles of human rights and fundamental freedoms are spelled out authoritatively and in precise detail.” The speeches continued into the 10th, when Eleanor Roosevelt (who had chaired the committee that drafted the UDHR) took her turn at the podium. Proclaiming that humanity stood “at the threshold of a great event both in the life of the United Nations and in the life of mankind,” Roosevelt expressed the hope that the UDHR would “become the international Magna Carta of men everywhere.” After more than thirty delegates had spoken, the Assembly voted: 48-0 in favor.

However, eight countries abstained. Soviet delegates had been intimately involved in drafting the Declaration, but Stalin’s government couldn’t accept the right of everyone to leave their country (not that it had any intention of honoring other rights enumerated in the UDHR), and the five not-exactly-autonomous Eastern European delegates (Byelorussia, Ukraine, Czechoslovakia, Poland, Yugoslavia) followed suit. While delegates from most Muslim-majority nations swallowed their concern about the religious freedom article (which guaranteed the right to change religion), Saudi Arabia refused to vote yes. And South Africa — in the year that the National Party won a landmark election and formally inaugurated apartheid — rejected the basic premises of the UDHR. During discussion of the document’s foundational first article (“All human beings are born free and equal in dignity and rights”), South African delegate C.T. Te Water declared that there was no such thing as a universal standard of dignity.

The genocide convention passed without debate or opposing votes, but it proved controversial as well. Three years after it was approved (the year it came into effect), the Civil Rights Congress (a more radical competitor of the NAACP) formally accused the United States government of the genocide of African-Americans, citing lynchings, legal discrimination, and pervasive inequalities. Liberals like Roosevelt dismissed the charge, in no small part because the petition was authored by Communist Party leader William Patterson. But while she insisted in her December 28, 1951 newspaper column that the Soviets refrained from making diplomatic hay of the charge because “they probably know it could be successfully answered,” she did fear “It will do great harm at home because the answers to untruths and half-truths are always less dramatic than the assertions.”

The Polish lawyer Raphael Lemkin was even less sympathetic. A refugee from Nazi Europe who had lost nearly fifty relatives in the Holocaust, Lemkin both coined the word “genocide” (combining the Greek for “race” or “tribe” with the Latin for “killing”) and worked tirelessly to bring the Genocide Convention to a vote. (He was unhappy that the UN immediately moved on to the UDHR, which he feared would overshadow his achievement.) Informed of the We Charge petition, Lemkin alleged that it was a Soviet-directed attempt to divert attention from their own genocidal actions in Poland, the Baltic Republics, and other countries.

Then in 1953 he wrote a letter to the New York Times, published as coming from “the founder of the world movement to outlaw genocide,” that contended that “by no stretch of the imagination can one discover in the United States an intent or plan to exterminate the Negro population, which is increasing in conditions of evident prosperity and progress.” Whatever you think about the veracity of that last claim, his final argument pointed to the enduring challenge of defining genocide:

The tragically dramatic nature of genocide should not be permitted to be deflated. By confusing genocide with discrimination injustice is done not only to existing international law but also to the good name of some democratic societies which might be unjustly slandered for genocide.

At this point Lemkin still harbored hope that the United States Senate would belatedly ratify the Genocide Convention, and didn’t want to see anything obstruct that end. But when he died six years later, that body still hadn’t taken action. And it would not until 1986, despite the heroic efforts of Sen. William Proxmire, who first spoke in favor of ratification in 1967 and gave more than 3200 more such speeches before the 1986 vote.

And it wasn’t until 1992 that the same chamber ratified the first of two international covenants putting some teeth to the (non-binding) Universal Declaration of Human Rights. The second such covenant (on social, economic, and cultural rights) has still not been ratified.

Nevertheless, December 9-10, 1948 remains a significant moment in the history of human rights — it’s where I’ll start my Human Rights in International History course this spring, in which we’ll be reading A World Made New, Mary Ann Glendon’s surprisingly lively account and analysis of the UDHR, and “A Problem from Hell,” the Pulitzer Prize-winning critique of American inaction in the age of genocide by Samantha Power, now this country’s ambassador to the UN.