The second half of my paper delivered last week at the Evangelical Theological Society, arguing for a more international and transnational approach to the history of evangelicalism.

A Global Reflex in Evangelical Historiography

Earlier this year the newsletter of the American Historical Association (AHA) published a study by Luke Clossey and Nicholas Guyatt finding that, for all the excitement in the AHA about world, international, and transnational history, “One fact quickly emerges: we’re overwhelmingly interested in ourselves. Europe, the US, and Canada are the subject of more than three-quarters of all historical research in Britain and North America.” They note sizable disparities between where people live and what Anglophone historians are interested in studying: e.g., the UK and Ireland account for 1% of the world’s population, but their history is the subject of almost 20% of all historical research; the USA accounts for about the same share of research, with less than 5% of Earth’s population. Meanwhile, Latin America and Sub-Saharan Africa are home to over one in five human beings, and are the focal points of about 8% of historical research. (See more at the authors’ website.)

Clossey is an expert on Jesuit missions, and one would think that historians of a religion as global in reach as Christianity would be exceptions to the pattern he and Guyatt observed. However, my semi-informed impression is that church and religious historians in this country remain disproportionately interested in North America and Europe — or North Americans and Europeans on mission to the rest of the world.

Just a couple of examples… First, in the last ten issues of Church History, only three articles out of over sixty focused on the history of Christianity since 1500 in Asia, Africa, or Latin America: Roberto Sánchez’s article on the influence of the African diaspora on popular religion in Peru; David King’s on the Japanese Christian activist Toyohiko Kagawa; and Chad Bauman’s review of the historiography of Indian Christianity. The current issue (September 2013) has a forum on Christianity and the American presidency, a piece on the California oilman Lyman Stewart, and three articles on medieval and early modern Europe.

(After I got back from Baltimore, the journal announced the contents of its December issue: every article on a modern topic focuses on Europeans and/or Americans.)

Second, while I greatly enjoyed last October’s biennial meeting of the Conference on Faith and History (CFH), it struck me that only five of the thirty-seven concurrent sessions focused somewhere other than the Global North. (Mea culpa: I organized one of the many centered on American religious history.) And most of the papers that considered Christianity in the Global South were concerned primarily with the experiences of American and British missionaries. Likewise, the CFH journal Fides et Historia — admirable as it is — tends to lean heavily on American religious history, with occasional exceptions like recent review essays by Daniel Miller (on Protestantism and politics in Latin America) and Bob Frykenberg (on the partition of India).

(CFH did, however, organize a 2011 conference in Mexico City meant to spur a Latin American Initiative in Global Christian Scholarship.)

Narrowing our focus to the still small body of literature on the “religious left,” Swartz’s work stands out from its few precursors for devoting significant attention to Latin Americans and other evangelicals from outside of North America and Europe. The year Richard Nixon resigned the White House, Richard Quebedeaux’s early introduction to The Young Evangelicals quoted Samuel Escobar and the Uruguayan Methodist Emilio Castro, and noted the international reach of InterVarsity, but Quebedeaux was preoccupied with the “present revolution in Orthodoxy” as it was taking place in the United States. Eight years later Robert Booth Fowler’s more scholarly introduction to the “spreading social and political diversity” of evangelicalism touched on responses to American foreign policy in Vietnam and the way that famines in Africa in the early 1970s mobilized evangelical concern for global hunger; but here too, he was interested in American progressives’ responses. He noted that American evangelicals were aware “that many Third World Christian theorists, especially in Latin America, saw many similarities in Christianity and Marxism” and acknowledged that some “were sympathetic students of liberation,” but named no such theorists of the Third World and hastened to add that American progressives “rarely accepted liberation theology completely. Marx’s Capital was hardly the Bible.”

Brantley Gasaway’s 2008 dissertation on politically progressive evangelicalism and public theology was written parallel to Swartz’s, but it focuses almost entirely on Americans: e.g., John Alexander, Jim Wallis, Ron Sider, and Tom Skinner. (Perhaps the revised version about to be published by University of North Carolina Press will be different.) Escobar makes appearances, as in Gasaway’s review of Urbana ’70, where the Peruvian theologian joined other progressives in rejecting a forced choice between evangelism and social action. But both in paying sustained attention to the role played by such Majority World evangelicals — and, equally importantly, in its use of secondary and primary sources written in Spanish — Swartz’s “Global Reflex” suggests a different way to write the recent history of American evangelicalism: as one expression of an international, interconnected movement whose center of gravity was already shifting southwards by 1970.

According to the most recent report from Gordon-Conwell’s Center for the Study of Global Christianity, three out of every four evangelicals live in Latin America, Africa, and Asia. From 1970 to 2010, the evangelical population grew 5.5-6.5 times faster in those regions than in North America, and in the present decade alone growth in the Global South is projected to outpace that in this part of the world by a factor of 2.5-3.5.

Or if you prefer the methodology of Operation World, whose definition of “evangelical” brings over 200 million more people into the fold, it’s worth noting that Kenya, Nigeria, Nicaragua, El Salvador, and ten other countries in the Global South have more evangelicals as a proportion of their total population than does the United States. Particularly as they look to the past four or five decades, American historians of evangelicalism need to recognize that the most significant developments were not happening in Colorado Springs, Lynchburg, or Grand Rapids, but Nairobi, Lagos, and Seoul. Perhaps the ETS will one day follow the lead of the Summer Olympics and World Cup and hold its meeting in Rio…

Not to say that there is no longer value in studying the history of evangelicalism in America, Britain, etc. Those stories should be told, and revised. But they cannot be treated in isolation. At the very least, comparative approaches suggest themselves. Better, historians of evangelicalism should be attentive to the ways in which ideas flowed through international networks. In Swartz’s “Global Reflex” chapter, for example, we see the importance of educational exchange, as Latin America, African, and Asian evangelicals studied in American, British, and European universities, where their witness proved convicting for First World students who began to question establishment evangelicalism. Then by writing their Theological Bulletin in English and Portuguese as well as Spanish, the FTL theologians succeeded in influencing the development of evangelicalism in the Caribbean, Africa, and Asia, as well as the USA, UK, and Australia. (It now publishes a theological journal in English.)

And fascinating and overdue as Swartz’s treatment of the American “moral minority” is… As we get an evangelical historiography that looks more like late 20th and early 21st century evangelicalism, we should expect the categories of “religious left” and “religious right” to become messier. Consider a few results of the Pew Forum’s survey of nearly 2200 evangelical leaders who attended the 2010 Lausanne Congress held in Cape Town, South Africa. Evangelical leaders from the Global South were about three times more likely than their counterparts from the United States to favor “making the Bible the law of the land,” but about 80% of the former group think that government “has a responsibility to care for the very poor” — a claim with which 40% of the American respondents disagreed. But Majority World evangelicalism is no monolith. While 94% and 96%, respectively, of respondents from Asia and Sub-Saharan Africa agreed that society should discourage homosexuality (even higher rates than among participants from the United States), a slight majority of Central and South American respondents said that society should accept homosexuality.

See also Oxford Press’ three-part series on Evangelical Christianity and Democracy in the Global South, edited by Timothy Samuel Shah (here’s the Latin America volume), in which evangelicals as different from each other as former Zambian president Frederick Chiluba (who declared his country a “Christian nation”) and the Brazilian legislator Benedita da Silva, a Pentecostal socialist, can be found at every point on a political spectrum that seems impossibly wider and more complex than its American equivalent. Or as David Swartz himself noted last January at the Social Science Research Council blog, The Immanent Frame, “African critiques of libertine sexuality, Asian critiques of American techniques of evangelization, and Latin American critiques of North American consumerism combine in ways that defy the imaginations of most Americans.” 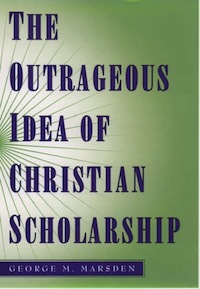 But Moral Minority also heralds what could be the next wave in the evolution of evangelical historiography: the students of Marsden, Noll, et al. going beyond national history to a kind of scholarship that recognizes the dramatic shift of the evangelical center of gravity to the Two-Thirds World.

The transition won’t be easy. As Noll himself points out in the current issue of Books & Culture, for church historians to “make sense of the great transformations that are now so obvious… is exceedingly difficult,” requiring them “to master events in places once considered far from the beaten path” and to “reshape agendas that define the important themes—Muslim-Christian interactions sharing space with Catholic-Protestant relations; poverty as more important for theological reflection than, say, baptism; biblical signs and wonders just as relevant as biblical criticism.” Still more practically, such a recentering will require American religious historians to develop greater facility with languages other than English: vestiges of empire like Spanish, Portuguese, and French; but also mother tongues like Luganda, Yoruba, Korean, and Mandarin and creole languages like Bislama (national language of Vanuatu, nearly 50% of whose population is evangelical). If they aren’t already, they should be preparing minor fields in regional history or world religions, but they also would do well to familiarize themselves with the methods and insights of international and transnational history.

David Swartz, in his chapter on the “Global Reflex” in Moral Minority and in his continuing work on the history of evangelical internationalist organizations like World Vision, makes clear that this kind of history can be written: synthesizing stories from several continents, drawing on sources in multiple languages, and cognizant that the ideas that reshaped progressive evangelicalism crossed national borders thanks to forces like migration, educational exchange, and mass communication. His work embodies the benefits claimed by historian Mae Ngai for the “transnational” turn in our discipline: “By directing attention to the circuits and flows of social forces and discourses that span nations and cultures, we unfasten the blinders of national history. In a sense it is an indirect approach, which hopes by way of the broader context to deflate claims of national greatness and to gesture to histories that are more connected, more aware and of a piece with the modern world.”

<<Read the first half of this paper