The modern distinction between sacred and secular has allowed the studies of religion and politics to go their separate ways in virtual isolation. (Nathan O. Hatch) 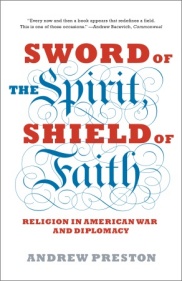 No one has done more in my native field than Andrew Preston (Sword of the Spirit, Shield of Faith: Religion in American War and Diplomacy) to bridge the gap. But as recently as seven years ago he could justifiably lament that while “Independently, religion and foreign relations are two of the most important and exhaustively studied aspects of American history,” those historical fields “have evolved separately and remained apart.” (From the November 2006 issue of Diplomatic History, the journal of the Society for Historians of American Foreign Relations.) Preston quoted Leo Ribuffo’s observation that “Political and diplomatic historians almost never know the work of such important [religious] scholars as George M. Marsden and Mark Noll.”

By the same token, I would guess that most religious historians do not know well the work of important [diplomatic] scholars like Paul Kennedy and John Lewis Gaddis — judging (among other things) by the blank stares I get when I mention those names to historians of Christianity who want to know with whom I studied. And this morning Philip Jenkins observed a related gap, in a post on religion and war: “…historians of Christianity are not necessarily too familiar with political, imperial or military history. That’s a general observation, not a criticism.”

Why is there such a gulf separating two such vitally important subdisciplines? At least on the diplomatic historians’ end, Preston suggested (and sought to overcome) three factors:

As Andrew Preston’s own work exemplifies, there’s been movement here of late. I’ve mentioned Andrew Rotter’s work on South Asia; in a neighboring region’s history, Seth Jacobs has written on the role of religion in inspiring American support for the Catholic Ngo Dinh Diem as leader of South Vietnam. William Inboden and Jonathan Herzog have provided deeper insight into what the latter calls the “spiritual-industrial complex” that dominated American foreign policy early in the Cold War.

And so it was exciting to come across this guest post on the Religion in American History blog, by graduate student Lauren Turek (Univ. of Virginia), who introduced herself with a sentence that I certainly don’t remember hearing often in graduate school: “As a historian of American foreign relations, I am keenly interested in understanding how American Christians, operating within the context of the global social, political, and economic changes of the late twentieth century, influenced international affairs and U.S. foreign policy.”

Drawing on statistical research by the Center for the Study of Global Christianity and the Pew Foundation, Turek asks how the rapid growth of Christianity in the Global South — plus transnational phenomena like decolonization, migration, and urbanization — has affected international relations and American foreign policy since the 1970s:

…I think that reading the data in light of historical moments such as the ICOWE [International Congress on World Evangelization — i.e., Lausanne I, about to celebrate its 40th anniversary] can sharpen our understanding of the major debates among and between Christians that grew out of an especially contingent and plastic moment in world history, and how these debates interacted with and contributed to ongoing global transformations. For example, how did increased evangelism by certain U.S. Christian groups in Latin America, Asia, and Africa in the 1970s and 1980s affect U.S. relations with countries in those regions? In what ways did the efforts of American Christians to connect and work with their increasingly independent brethren in the Global South influence their strategies for outreach and humanitarian aid? How have the U.N. Millennium Development Goals, which the CSGC report discusses, coupled with Christian demographic changes abroad, influenced social action work by U.S. Christians? Does the fact that USAID provides support to U.S. Christians engaged in this type of humanitarian work have an effect on perceptions about the United States abroad, or on the spread of Christianity? How has the parallel growth of other major world religions, especially Islam, interacted with the expansion of Christianity, and what are the global implications?

I hope that diplomatic/international historians and religious historians alike are paying attention to the creative work being done by young scholars like Turek!

One thought on “Mind the Gap: The Histories of Christianity and of International Relations”