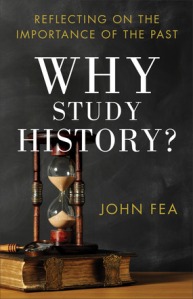 If you’ve been wondering “Who is John Fea, and why has his forthcoming book, Why Study History? Reflecting on the Importance of the Past, been spotlighted in Christianity Today as “New and Noteworthy” and his blog, The Way of Improvement Leads Home, been named by one semi-knowledgeable source as one of ten by Christian historians that you should be reading?”, then check out this interview by the folks at another blog on that list, The Juvenile Instructor.

The first set of questions lets John share a bit of his own story and preview some themes from Why Study History? (which he’s also been doing at his blog and via Twitter). I was especially taken by his reflection on historical study as spiritual formation:

I would never say that the study of history is a replacement for the power of the Holy Spirit in our lives and communities, but I do think it can make a modest contribution to our spiritual formation by teaching us to love God and love our neighbor.  I teach history as a form of public engagement with the dead.  (I borrow a great deal here from University of Virginia theologian Charles Mathewes).  When we enter the public sphere as Christians we encounter people who are different than us.  Rather than flee from these encounters into the safe havens of our religious worlds (where everyone is just like us), we need to be open to the possibility that such encounters can be occasions for spiritual transformation.  According to Mathewes, public engagement cultivates Christian character, purifies our souls, and prepares us for our heavenly home.  In the process of loving our neighbor—a practice that goes to the heart of civic life—we grow as Christians.  I think this kind of public theology can also be applied to our encounter with the past.  I want my students to learn how to love the dead—people from a “foreign country” who lived very, very different lives than they do.  This, of course, is not easy.  Loving our enemies never is.  But I am convinced that such an approach to the study of history can make us better people, better Christians.

Then a subsequent answer finds John addressing what Dan Allosso, in his comment on the “10 Blogs” post, called the distinction between “the history of religion and religious history”: 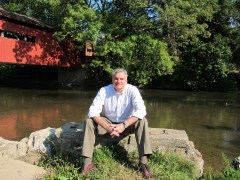 I think all historians, to some extent, must bracket their faith in order to write good history.  This is difficult, but it is necessary in order to tell a story about the past effectively and fairly.  I am not sure I like the term “believing history” because most critics think it is some kind of code for providential history, or the idea that the evangelical historian has some special insight into the work of God in the past.  In Why Study History? I write about the process of bracketing as if it were an ascetic discipline.  Bracketing our presuppositions forces us to listen to the historical actors on their terms, not our terms.

On the other hand, religious historians often wear different hats.  I write for both academic audiences and the church.  When I write for the church it is important that I identify myself as a Christian.  If I want to be effective in teaching the church about the benefits of historical thinking it certainly helps if I identify myself as one of them—an insider, so to speak.  This became abundantly clear to me when I was touring to promote Was America Founded as a Christian Nation?  Evangelicals were more open to hearing what I had to say when they knew that I was a card-carrying member of their religious community and could speak their language on matters of faith.