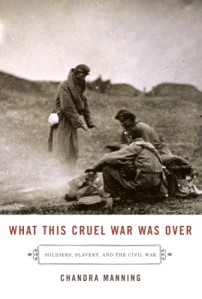 Over the weekend the always-interesting blog Disunion (hosted by the New York Times website) posted “The Name of War,” in which Georgetown University history professors Chandra Manning and Andrew Rothman tracked the evolving answer to a seemingly obvious question:

What did Americans call the war fought between the Confederacy and Union from 1861 to 1865?

While the course on this event taught by my colleague Diana Magnuson uses the now-familiar title, “The American Civil War,” Manning and Rothman point out that this was not common in 1861-1865, or even the quarter-century following it.

Participants in the war ranging from Abraham Lincoln (giving the Gettysburg Address) to a Virginia officer (writing home to his mother) “sometimes used the uncapitalized phrase ‘civil war’ as a declarative description of the mess in which they found themselves, but Civil War was not yet a proper noun.” Far more often, Northerners called what was happening a “rebellion” or “insurrection,” which not only “had profound constitutional implications” (Article 1, Section 8-9), but “created a common antislavery ground among a wide swath of white Northerners that was much more solid than abolitionism.” (I also wonder if “the Civil War” still meant an event in 17th century England to some Americans…) Perhaps more surprisingly, some Southerners embraced this terminology, calling themselves “Rebs.”

In 1866 a Mississippi politician named Henry S. Foote (a Unionist who had nonetheless served in the Confederate Congress) was an early adopter of the formal name “War of the Rebellion” for his book by that title. And when the U.S. government began to publish documents of the war in 1881, the title was The War of the Rebellion: A Compilation of the Official Records of the Union and Confederate Armies.

But, according to Manning and Rothman, “The Civil War” began to overtake “War of the Rebellion” in that same year, when former Confederate president Jefferson Davis used the former in his book on The Rise and Fall of the Confederate Government, and Century magazine began to print essays by former officers from both sides that were later published in volumes entitled, Battles and Leaders of the Civil War. To Manning and Rothman, “Civil War” was the more “conciliatory” term, increasingly preferable to Americans (white ones, at least) eager to move on.

“Rebellion” language fell off dramatically starting in 1890. Indeed, as this Google Ngram from Manning and Rothman shows, by 1910 it had been overtaken by “War Between the States,” a “pro-Confederate” alternative that “began to rise in popular usage around the turn of the century and peaked in 1925, as the Southern dogma of the Lost Cause gained traction.”

(It then declined sharply around 1930, without ever entirely disappearing from the lexicon. For example, it’s the phrase used by the United Daughters of the Confederacy, which contends that “the term ‘Civil War’ is misleading and inexact. The war was not a class struggle, but a sectional combat, having its roots in such complex political, economic, social and psychological elements that it is difficult for historians to agree on all its basic causes.)

All this brought to mind an early meeting with my undergraduate adviser at the College of William and Mary, in Williamsburg, Virginia. I had recently switched my major from International Relations to History, and we were considering courses for me to take in the spring. In his Southern drawl, he suggested, “Have you thought about studying the War of Northern Aggression?”

I’ve got to think that he was having a little fun with me (one of only four Minnesotans to matriculate at William and Mary that year — and no, I didn’t take such a class), but that phrase has gained some currency in the last few decades. According to my own Google Ngram, it first showed up in the middle of desegregation, then took off in the mid-Eighties. Its use earlier this year by the new president of the National Rifle Association (a lawyer from Alabama) garnered significant attention.

Now, even for its peak year of 2004, “War of Northern Aggression” still showed up in Google Books only 8% as often as “War Between the States,” to say nothing of “The Civil War.” But if it’s a rarity, it’s a disturbing one for historians like James McPherson, who turned it on its head in a 1989 review essay, “The War of Southern Aggression” (subscription required for full text):

To a good many southerners the events of 1861–1865 have been known as “The War of Northern Aggression.” Never mind that the South took the initiative by seceding in defiance of an election of a president by a constitutional majority. Never mind that the Confederacy started the war by firing on the American flag. These were seen as preemptive acts of defense against northern aggression. The election of Lincoln by northern votes was “a deliberate, cold-blooded insult and outrage” to southern honor, a New Orleans newspaper declared, while a committee of the Virginia legislature declared that “the very existence of such a party [Republican] is an offense to the whole South.”