My colleague Sam Mulberry and I are about halfway through the first online version of one of Bethel’s signature courses: GES130 Christianity and Western Culture. (Look for some reflections on that experience in August.) We’ve reconfigured what had been a lecture-discussion course, building it instead around documentary films, virtual museums, and daily writing assignments. We’re about 7-10 days ahead of students, which means that they’re about to start the Middle Ages today, but I’ve spent the last few days working on a film and museum about the Reformations.

And as it happens, today is the birthday of one of the most famous, and controversial, Protestant reformers: John Calvin (b. July 10, 1509).

I feel like I always struggle to do justice to Calvin. I didn’t grow up in the Reformed tradition and don’t hold to all of the beliefs normally clustered together as “Calvinism.” (So if any of our summer students happen to be reading this, please skip past the audio commentary I recorded for the “Reformed Tradition” wing of our Reformation museum and instead simply watch interviews with my Reformed colleagues Ray VanArragon and Fred Van Geest, or read the excerpts from the Heidelberg Catechism, Belgic Confession, and Canons of Dort that we provide.) Calvin’s own conduct as the primary religious leader (though not, it can’t be said enough, political ruler) of Geneva can be off-putting to those of us who grew up in the religious plural, tolerant West (cf. Michael Servetus). And even more basically, he’s simply not an especially likeable figure, as his own biographers must acknowledge.

For example, Alister McGrath, in his Life of John Calvin, takes pains early on to underscore that “The great stereotypes of the past, portraying Calvin as a bloodthirsty dictator and Calvinism as mindless moral rigorism, are — despite their occasional resuscitation in polemical writings — behind us” (p. xiii). And he points out that “The historical reconstruction of Calvin’s complex personality has been considerably hindered by the perseverance of the intensely hostile portrait of the reformer due to Jerome Bolsec, with whom Calvin crossed swords in 1551.” (In his 1577 Vie de Calvin, Bolsec accused Calvin — among other things — of sexual impropriety with women and men.) “Nevertheless,” McGrath admits:

it is probably fair to suggest that Calvin was not a particularly attractive person, lacking the wit, humour and warmth which made Luther so entertaining at dinner parties. Calvin’s persona, as it emerges from his writings, is that of a somewhat cold and detached individual, increasingly inclined towards tetchiness and irritability as his health declined [Calvin suffered from migraines and irritable bowel syndrome, McGrath concludes], and prone to launch into abusive personal attacks on those with whom he disagreed, rather than dealing primarily with their ideas….it is clear that he was an unhappy man, with whom it is difficult for the modern reader to feel any great bond of sympathy. It is very easy to be predisposed to a hostile attitude towards him. (p. 17)

Of course, if any one of coldness, detachment, tetchiness, abusiveness, or unhappiness are to keep someone from appearing in our clouds of witnesses… Well, we could safely ignore most all great Christian theologians.

Despite my inclination to dislike him, my unease at some of his behavior, and the way my head and heart revolt against some of the doctrines that bear his name (a revolt that, given the T in TULIP, would hardly surprise a Five-Point Calvinist, or cause them to rethink their worldview), I can’t deny his enormous historical importance and, more, my deep appreciation for certain elements of his thought.

Here it’s helpful to silence my antipathy (I’ll be starting a series on spiritual disciplines soon — silence will lead off) and let Reformed voices soften my heart. For example, the writer Marilynne Robinson (who will be receiving a National Humanities Medal from President Obama today) concluded her foreword to a 2006 selection of Calvin’s writings in this way:

…Calvin looms as large as he does because he ranks among the greatest theologians. He was a controversialist, as were other important figures of that contentious period, Martin Luther and Thomas More, for example. And this can be a distraction to modern readers, especially those not acquainted with the standards of that time. Calvin is so exceptional because, looking past the polemic, one finds a metaphysics of startling beauty. Calvin takes the individualism of Luther, the assertion that every believer is king, priest, and prophet, and develops it into an interpretation of reality centered in the individual perceiver. Mind, memory, senses — the human attributes that according to Calvin make us an image of God — are attuned to experiencing creation as in effect addressed to us, moment to moment, collectively and one by one. Perception is flawed by our Adamic sinfulness. But it is brilliant all the same and, by the grace of God, flooded with the beauty of the world God has made for us. There is nothing static in Calvin’s universe, nothing fixed except by the will of God as consideration for our frailty. (pp. xviii-ix)

Robinson’s emphasis on Calvin having a “metaphysics of startling beauty” reminds me of a passage from his Golden Booklet of the True Christian Life (as paraphrased by our former colleague Virginia Lettinga) that we’ve long included in the course reader for Christianity and Western Culture:

The first principle we should recognize is that the use of the gifts of God cannot be wrong, as long as they are used the way that the Creator intended.  For he has made earthly blessings for our benefit, and not for our harm.  No one, therefore, will observe a more appropriate rule than one who faithful observes this principle.

For example, if we study why God has created such a variety of foods, we shall conclude that it was his intention not only to provide for our needs, but also for our pleasure and our delight.  In clothing too, he did not only remember our needs, but also decency and appropriateness.  In plants and trees, he not only made them practical, but also beautiful to us with elegant shapes and pleasant smells.  If this weren’t true, then the Psalmist wouldn’t have counted among God’s blessings “the wine that makes glad the heart of man and the oil that makes his face to shine” [Ps 104:15]. Nor would Scripture declare everywhere that God has given all these things to humans so that we might praise his goodness.

Let us discard, therefore, the inhuman philosophy which would deny us the use of creation unless it was absolutely necessary.  Such a poisonous idea would steal from us a lawful enjoyment of God’s kindness.

At the same time, Calvin warns against the extreme that mirrors legalistic asceticism, and that’s an important word to share with college students who suddenly are exercising enormous personal freedom and tempted by impulses that have been shaped by American culture: “The Lord who commands us to use this world as though we weren’t using it, forbids not only excess in eating and drinking, but also in every thing that could drag down our spiritual level or destroy our devotion: pleasure, ambition, pride, care for our clothing, home or possessions.” 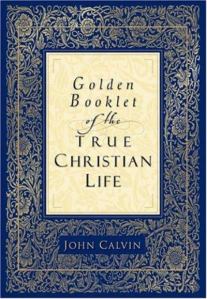 But what I particularly stress when teaching this text to students is Calvin’s famous passage on vocation. Having earlier insisted that “We Belong to God. We are not our own…. We belong to God: let all the parts of our life strive toward him as our only appropriate goal,” the reformer concludes:

Finally, we should note that the Lord commands every one of us in all the actions of our life, to be faithful to our calling.  For he knows that the human mind burns with restlessness, that it easily slides here and there, and that it loves to jump from thing to thing.

Therefore, to prevent general confusion being produced by our foolish boldness, God has appointed to everyone his particular duties in the different spheres of life….

While that can sound inhibiting to restless eighteen year olds (for whom sliding here and there and jumping from thing to thing is much of what leaving home and going to college is about) is nonetheless hugely liberating for Calvin, since

everyone in his or her own sphere of life will show more patience, will overcome more difficulties, and will more cheerfully shoulder cares, miseries and anxieties because they are confident that their tasks are laid upon their shoulders by God.

If we follow our divine calling we shall receive this special comfort: there is no job so simple, dull, or dirty that God does not consider it truly respectable and highly important! (Coram Deo!)

(I think of “simple, dull, or dirty” every time I have to grade exams, as I did yesterday.)

For McGrath, this understanding of vocation helps explain why Calvin is such a “complex personality,” and so reticent to reveal much of himself:

In a rare moment of personal disclosure, he made clear his passionate belief that he had been set aside by God for a specific purpose. Reflecting upon his career, he could discern the hidden hand of God, he believed, directing his life at crucial moments. He considered that, despite his personal worthlessness, God had called him, changed the course of his life, directed him to Geneva, and conferred upon him the office of pastor and preacher of the gospel. Whatever authority Calvin possessed he understood to derive from God rather than his own innate talents and abilities. He was but an instrument in the hand of God….

It is this understanding of his calling which underpins the apparent tensions in our knowledge of Calvin’s personality. A timid and withdrawn character, he was nonetheless capable of a courage bordering on intransigence, a refusal to compromise, when he believed the will of God to be at stake. Willing to be mocked as a person (although often deeply wounded as a result), Calvin was not prepared to allow that ridicule to be transferred from himself as an individual to the cause and the God he believed he was serving. Above all, he appears to have been convinced that he was but an instrument through which God could work; a mouthpiece through which God might speak. He viewed his personality as a potential obstacle to these divine actions, and appears to have cultivated personal modesty in response. (A Life of John Calvin, pp. 17-18)