I’m still half a year away from taking a group of Bethel University students to Europe for a three-week course on the history of World War I, but while I’ve still got some time before our fall semester starts up, I thought I’d revive an earlier series on how the war was commemorated.

My earlier posts focused on commemoration in Europe; today I’ll start looking at how that same process  took place closer to home, here in Minnesota. I’ll discuss the Twin Cities of Minneapolis and St. Paul in a later post or two, but let me start 150 miles to the north, in the port city of Duluth.

Somewhat on the spur of the moment, yesterday my wife and I decided to take advantage of a rare summer day when weather in Duluth was supposed to be warmer and sunnier than in the Twin Cities and drive north to show our children a few sites in Minnesota’s fourth-largest city. Of course, me being me, I insisted that we make a couple of very minor side trips once we got there, to see a memorial and museum with WWI connections.

(This is nothing new. On our honeymoon in Nova Scotia, we decided to eat lunch in the small town of Antigonish. As we drove into the center of town, my eyes got huge, an incomprehensible cry of delight escaped my throat, and I swerved our rented PT Cruiser into a parking lot. I grabbed my camera and darted from the car… to take a picture of the obelisk that serves as the town’s World War memorial. It got worse: I also insisted that we roam the nearby campus of St. Francis Xavier University until I could find a statue of its namesake, to take a picture for a lecture I give on the Catholic Reformation. Remarkably, we’re still married, six years later. But perhaps I digress…)

Duluth’s Soldiers and Sailors Monument is actually a very fancy flagpole, though it’s accompanied by a statue (designed by a different artist) that makes it seem more monumental. As we’ll see as I get into the memorial in a moment, there’s none of the muted triumph, angst, or abstract grandeur that you find with European memorials. No, Duluth’s memorial is nakedly patriotic, and a prime example of how Americans responded to the commemorative impulse that quickly followed from the end of what they then called the Great War.

First, some background, courtesy of Barry Schwartz’s entry on “Memorials, War” in The Oxford Companion to American Military History. He points out that Americans did surprisingly little commemoration of their wars until the country’s second century. Most of the local monuments erected in the wake of the Revolutionary War were “obscure” and even the grandest example “was meagerly ornamented and conveyed no sense of the cause it symbolized.” Schwartz concludes that this “commemorative restraint” stemmed from a republican anti-authoritarianism that shunned monuments as befitting European militarism and monarchism. (a theme I encountered in an earlier post on the history of presidential memorials) At first the Civil War also inspired relatively little commemoration (partly, in the South, for economic reasons — there wasn’t much money for such luxuries), but things started to change in the late nineteenth century, as the war generation began to die off and new monuments celebrated a growing sense of “regional reconciliation.” He cites Gettysburg’s National Military Park as exemplary of the trend, which continued into the early 20th century — the time when more grandiose Revolutionary monuments came into being.

Then Schwartz comes to the (first) World War, which the United States entered in April 1917, with American forces not seeing significant action until May-June 1918:

World War I cost the United States less in life and treasure than did the Civil War, but its proclaimed achievement, saving the world for democracy, was greater, and so was its monument production. Massive numbers of monuments emerged right after the armistice, ranging all the way from plaques to statues of “doughboys” (common soldiers) at city halls and town squares to massive commemorative centers. America’s fatalities — 117,000 — were relatively light, but its monuments were grand and somber. (Oxford Companion to American Military History, p. 430) 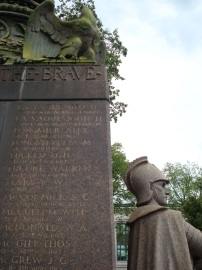 Erected three years after the war’s end, the Duluth monument fits the Schwartz’s description perfectly. Indeed, it even illustrates the connection he draws between the Civil War and World War I. While clearly influenced (and occasioned) by America’s participation in WWI, the soldiers and sailors named are actually veterans of the war of 1861-1865, and the monument was commissioned by the local post of the Grand Army of the Republic — the still-influential fraternal organization uniting Civil War veterans — and not by the new American Legion, whose founding convention had drawn Great War veterans to Minneapolis just two years before. (As far as I know there aren’t actually any WWI dead listed — though I’d welcome clarification to the contrary.)

The monument is actually composed of two works by two relatively famous artists. (The picture to the left gives you glimpses of each.)

The flagpole rises from a memorial designed by Cass Gilbert, better known in Minnesota for the state’s rather impressive capitol building, and nationally for the underwhelming U.S. Supreme Court building in Washington, DC. An eagle looks out from each corner and the final two lines of “The Star-Spangled Banner” wrap around the top of the memorial.

In any event, the flagpole and memorial proper are protected by the statue of a knight, with the caption “Patriotism Guards the Flag.” It was the work of the sculptor Paul Wayland Bartlett, also better known for a work often seen on visits to Washington, DC: the pediment of the House of Representatives at the U.S. Capitol.

I’m sure they exist, but I can’t recall seeing a single WWI memorial in Europe that featured a statue of “Patriotism,” let alone a design that drew the eye to the national symbol, national flag, and words of the national anthem and away from the names being memorialized.

It certainly speaks to the massive disconnect between the European and American experiences of the war. As they struggled to commemorate a dubious triumph that killed hundreds of thousands of their people, there was no question of America’s erstwhile allies (well, “associates”) Britain and France wrapping their memorials in the Union Jack or Tricouleur. Meanwhile, the Grand Army of the Republic responded to Armistice with nationalistic fervor, sponsoring a work that implicitly linked the actions of the USA in 1917-1918 with the justice of the Union cause in 1861-1865.

Schwartz points out that WWI commemoration in America also happened to coincide with an architectural movement that fit well with the celebratory, self-righteous, unproblematically patriotic mood that inspired works like Gilbert’s memorial and Bartlett’s statue:

Early twentieth-century monument production in America was accelerated by a City Beautiful movement that used the Industrial Revolution’s wealth to clear away its debris. Of the many objects chosen to beautify the city, war memorials were best suited because they symbolized the expanding power and reach of the state and the great wave of “Americanism” that inundated the society during the first quarter of the twentieth century. (Oxford Companion to American Military History, p. 430)

He cites Newark’s Wars of America sculptures as best exemplifying “this confluence of statism and democratization,” but Duluth’s monument also fits the bill. If you look back at the first picture I embedded, you’ll see that the Soldiers and Sailors Monument stands in front of a set of classical columns. They belong to the St. Louis County Courthouse, whose architect, Daniel Burnham, had helped launch the City Beautiful movement with his work on the 1893 Columbian Exposition in Chicago. And there’s more than a faint echo of that “White City” in the design of a courthouse that was meant to match Duluth’s turn-of-the-century ambitions to become an international center (it even bid for the 1932 Winter Olympics) but now hosts the legal business of a sprawling county that has fewer people than it did in 1920.

The courthouse and monument are just part of Duluth’s Civic Center district, which architectural historian David Gebhard calls “one of the most impressive Classical civic centers in the country,” and — with the state capitol building in St. Paul — “[presenting] the fullest realization of the turn-of-the-century City Beautiful movement in Minnesota” (Guide to the Architecture of Minnesota, p. 187). It’s also worth noting that City Beautiful drew heavily from the French Beaux-Arts school, which strongly influenced Paul Bartlett, the sculptor of the “Patriotism” figure guarding Duluth’s memorial flag pole.

Originally, Burnham’s county courthouse included another memorial for the members of the Grand Army of the Republic, a “Soldiers’ Memorial Room” that came to be known as Memorial Hall. As the final veterans of the Civil War died off, the Hall passed briefly into the hands of a Spanish-American War veterans’ group, and then into disuse in the 1960s.

But the Memorial Hall started a second life when it moved down the hill from the courthouse to Duluth’s Union Depot. Now a cultural center, the former railroad station is home to a train museum that thrilled my two year old son and scared his twin sister to death, as well as a children’s museum, a theater, and the St. Louis County Historical Society. The historical society partners with area veterans to administer a new “Veterans’ Memorial Hall” as a small but well-designed museum just off the Great Hall of the Depot, showcasing pieces from what it trumpets as “one of the largest collections of military items and veterans’ stories in the state of Minnesota.” Here are some of its WWI artifacts: