• …but instead of finishing that series (as I keep promising), I got curious about the history of presidential memorials in Washington, DC — and the controversies attending them.

• The last surviving veteran of World War I died, and that person’s identity might surprise you. (It did me.)

• I violated one of my own self-imposed rules and spouted off about theology: specifically, that of the sacrament of Communion.

• Almost 170 million people watched at least part of the Super Bowl. I was one of them, but as faithful readers of this blog could have predicted, I was also one of the 4 million who watched Downton Abbey instead of the thrilling fourth quarter. So perhaps I was feeling bitter when I celebrated the end of the NFL season and the approach of baseball…

• And for the other three people who combine enjoyment of Downton Abbey with love of baseball… Alicia Cohn celebrated Downton‘s “emphasis on humans’ agency and accountability despite social and economic barriers,” and Jonah Keri told the fascinating history of the spitball and its decline.

• There’s a new addition to my Recommended Links page: Real World Economics by Ed Lotterman. Ed’s that rare combination: the historically-minded economist. He also knows how to write well, which has rarely been my experience of the “dismal science.”

• Our church is a week away from hosting Soong-Chan Rah for a three-day event on helping Christians bridge cultural and generational divides. Anyone interested in that event might also want to read this post on cultural intelligence, collectively written by Rah, Eugene Cho, and Helen Lee in response to a campaign ad in Michigan’s Senate race.

• So, John Piper and his comments about God giving a “masculine feel” to Christianity… I’m with Christian Piatt: “I really want to give people like John Piper the benefit of the doubt.” But like Piatt, I think it’s one thing to celebrate virtues like strength, courage, and self-sacrifice and another to say that “Theology and church and mission are marked by an overarching godly male leadership in the spirit of Christ….” 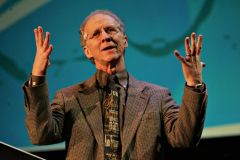 And I say Amen to Rachel Stone: “I don’t believe God has given Christians a mandate to preserve and perpetuate cultural notions of masculinity and femininity any more than God wishes us to adopt Ancient Near Eastern (or Greco-Roman) blindspots about (dis)ability, race, and social class.” Most of all, I salute my colleague up at Bethel Seminary, Kyle Roberts, for his response, which affirms both the particularity of Christ’s Incarnation and the uniqueness of his divine nature, and reminds us of the seemingly feminine traits of that easily-forgotten third person of the Godhead:

God has not given us a Christianity with a masculine feel. Rather, Christianity has created a God with a masculine feel, to the extent we have forgotten that (1) God is not literally gendered (except in the incarnation) and (2) The Spirit and the Son — the two hands of the Father — suggest a diversity that just might validate the diversity in human creation and thereby give value equally, not just to both sexes, but to all configurations and combinations, in individual persons, of what society has traditionally called “feminine” and “masculine.”

• The people who nod along with John Piper would probably have multiple problems with a woman who not only pastors a Lutheran church but keeps a blog that is occasionally reposted by The Christian Century. But I still liked her set of four vignettes. (H/T CC Blogs)