During my Thanksgiving hiatus I’m reprising some older posts: one each from June/July, August, September, and October. This one was originally posted on October 7, when I asked who people used to think of as the “worst person in history” before Adolf Hitler came along to seize that title. If you like what you see, please consider nominating this blog at the Cliopatria Awards, recognizing excellence in history-related blogging. Perhaps the Best New Blog or Best Individual Blog categories?

(On overly facile Nazi analogies, check out the current episode of The Christian Humanist Podcast, which discusses Godwin’s Law. Full disclosure: I’ve only listened to the first ten minutes of the episode and need to get this posted, so sorry, guys, if you’ve already made the argument than I’m about to make.)

Williams’ foolish statement accomplished at least three things. First, it reminded America that Hank Williams, Jr. was still alive. Second, it got him dumped from his longtime spot singing the opening to Monday Night Football. Third, it got the “Explainer” section at Slate wondering, “Before World War II, who was the rhetorical worst person in history?”

After polling a roster of historians, the somewhat surprising answer came back:

In the 18th, 19th, and early 20th centuries, many Americans and Europeans had a firmer grasp of the bible than of the history of genocidal dictators. Orators in search of a universal symbol for evil typically turned to figures like Judas Iscariot, Pontius Pilate, or, most frequently, the Pharaoh of Exodus, who chose to endure 10 plagues rather than let the Hebrew people go. In Common Sense, Thomas Paine wrote: “No man was a warmer wisher for reconciliation than myself, before the fatal nineteenth of April, 1775 [the date of the Lexington massacre], but the moment the event of that day was made known, I rejected the hardened, sullen tempered Pharaoh of England for ever.” In the run-up to the Civil War, abolitionists regularly referred to slaveholders as modern-day Pharaohs. Even after VE Day, Pharaoh continued to pop up in the speeches of social reformers like Martin Luther King Jr.

After a moment of two of reflection, the answer makes all kinds of sense. First, it comes from a time when a certain degree of biblical literacy could reasonably be taken for granted. So even a secularist like Paine, knowing his audience, would appeal to (and perhaps even be shaped by) the story of Exodus. For an excellent new study of that phenomenon, see Timothy Larsen’s A People of One Book: The Bible and the Victorians, which finds not only Christian social reformers like Florence Nightingale and Josephine Butler, but famous skeptics like Annie Besant and Thomas Huxley deeply knowledgeable about Scripture and, as Larsen says of Besant, cognizant “that biblical language added weight to a pronouncement.”

The Slate piece mentioned a few non-biblical “worst persons in history”: Napoleon Bonaparte, George III (among Americans), and Abraham Lincoln (among Confederates). But somehow they failed to acknowledge what, it seems to me, has been far and away the most common “worst person in history” rhetorical move: labeling someone (or an institution) as “Antichrist,” what Theopedia defines, in Christian eschatology, as that “person or other entity that is the embodiment of evil and utterly opposed to truth.” (I’ll admit: this is equating one person with another, rather than merely likening the two. But the rhetorical effect seems similar. I’ll run with it and let myself be corrected in the Comments section…)

For most of the last half-millennium, Protestant Christians have most frequently described the Pope (whether the sitting Bishop of Rome or the institution of the papacy itself) in such terms. From the first years of the German Reformation, an early example of this phenomenon is the 1521 woodcut series entitled The Passion of the Christ and the Antichrist, illustrated by Lucas Cranach the Elder with text by Philipp Melanchthon (later to soften his stance towards Rome). It paired thirteen illustrations of stories of Jesus with thirteen cartoons of the corrupt, depraved Pope. For example, below Jesus washes the feet of his disciples, while, by contrast, the Pope presents his foot to be kissed by the powers of this world. (There are nastier examples in the series, which concludes with Jesus’ ascension to heaven side by side with the Pope being cast into the fires of hell.) 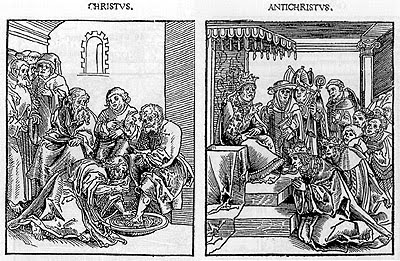 Or here’s a catchy German hymn from 1525. Try to guess who it’s about…

To be fair, in the 16th century the Pope wasn’t the only Christian leader to be demonized as the Antichrist. In 1588 a Puritan polemicist calling himself “Martin Marprelate” addressed the following to the Archbishop of Canterbury and other bishops in the Church of England:

Of course, the chief complaint of “Marprelate” was the “popery” of the Anglican church, as chapter 25 of the 1647 Westminster Confession made clear:

There is no other head of the Church but the Lord Jesus Christ: nor can the Pope of Rome in any sense be head thereof; but is that Antichrist, that man of sin and son of perdition, that exalteth himself in the Church against Christ, and all that is called God.

Such language did not disappear from Protestantism as it crossed the Atlantic and entered the modern age. For example, Philip Jenkins notes how anti-Catholicism, particularly as expressed using apocalyptic language like Antichrist, retained its force long after the founding of the American Republic:

At least through the nineteenth century, many Protestants accepted that the Roman church was the monstrous creature prophesied in the Book of Revelation, Babylon the great, the “mother of harlots” clothed in purple and scarlet, who held in her hand “a golden cup full of abominations.” The Pope, evidently, was the Antichrist. American publishers poured forth books and pamphlets with hair-raising titles such as The Trial of the Pope of Rome: The Antichrist, or man of sin… for high treason against the son of God. (The New Anti-Catholicism, p. 24)

And as Mark Noll and Carolyn Nystrom point out (in an earlier collaboration than the one I’ve been reviewing too sporadically), even someone so resolutely evangelical as the Presbyterian theologian Charles Hodge had to be careful with his terms in opposing an 1845 resolution denying the validity of Catholic baptisms:

The terms antichrist, synagogue of Satan, etc., refer not to the mass of the people, nor to the presbyters of that communion, nor the Word of God, nor the saving truths which they profess, but to the Popish hierarchy and its corruptions. That hierarchy with its usurpations and errors, is the mystery of iniquity, the man of sin, which in the church catholic, the temple of God, exalts itself above all that is called God or that is worshipped. If Roman Catholics are no part of the visible church, then the Romish hierarchy is not the “man of sin” spoken of by the apostle, for he was to rise and rule in the church. It is, therefore, one thing to denounce the Roman system, and another to say that Romanists are no part of the church catholic. (quoted in Is the Reformation Over?, pp. 44-45)

While anti-Catholicism remained powerful even after Hitler had emerged as the embodiment of evil, Pope/Antichrist rhetoric seems to have receded in the 20th century. Though it has not entirely disappeared. At least not in the blogosphere.

Or in the mind of the self-proclaimed “modern-day Jesus Christ” who allegedly fired shots at the White House on November 16th. Other highlights from this blog in October 2011: