A couple of years ago I was asked to give three talks as part of our church’s mid-spring “family camp,” at Covenant Pines in northern Minnesota. There weren’t many stipulations, not even a suggested topic, but I was encouraged to be “inspiring.”

Now, as a trained scholar who studies some pretty awful episodes in human history (world wars, genocides), I’m accustomed to informing, challenging, perplexing, and even disturbing my audience. But it’s rare, I suspect, that I inspire anyone.

So I decided to go well outside my fields of expertise and invest some time in researching a topic that I find not only vitally important, but genuinely inspiring: the transformation of Christianity into a global religion thanks to the recent, remarkable growth of the Church in Africa, Asia, and Latin America.

To give my listeners some sense of why this is so significant, even breathtaking, I started with some statistics:

And then there’s China, about whose Christian population there is significant debate. But even those who doubt that the Chinese church will soon outgrow its American cousin concede that Christianity in China not only survived the Communist victory in 1949 and the ensuing expulsion of Western missionaries, but grew markedly under indigenous leadership.

How did this happen? How could a religion that was so closely identified with Western imperialism have put down roots — let alone thrived! — in the postcolonial world?

To help us understand the trajectory of this astonishing development in contemporary history, tomorrow I’m going to start blogging through the seventeen stories of African and Asian Christians included in a new book from historian Mark Noll and writer Carolyn Nystrom, Clouds of Witnesses: Christian Voices from Africa and Asia (InterVarsity Press). 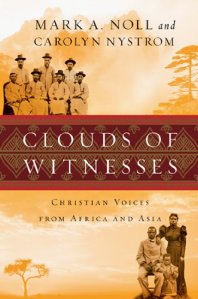 The title refers to the well-known scriptural image of “the great cloud of witnesses” (Heb 12:1), referring back to ch. 11’s stories of men and women “of faith” from what Christians recognize as the Old Testament. Write Noll & Nystrom, “Our ‘witnesses,’ while not on the same plane as these biblical exemplars, may also serve as examples from other times and places of those who prevailed in their Christian profession” (p. 15). Or confession, as the authors explain that the subtitle’s use of “voices” alludes to the repeated theme in Hebrews of holding fast to the faith that Christians confess.

The lives sketched in this book belonged to individuals who held fast to their confession of Christ but did so in circumstances different from what most Western believers have experienced. Our hope is that these stories encourage all who read the book to persevere in following Christ. It is an appeal to realize that the work of encouragement in Christ, which is so central to the book of Hebrews, has now taken on striking international dimensions. The clouds of witnesses who have been faithful, often through stresses that parallel what was described in Hebrews, are numerous; and they come from everywhere. How these witnesses confessed Christ in many tongues deepens, expands and enriches the story of salvation that the book of Hebrews proclaims. (pp. 15-16)

When I first saw the names of these women and men, I was lucky to recognize perhaps two or three. That’s in part because Noll and Nystrom intentionally selected relatively obscure figures (more familiar names like Watchman Nee and Samuel Ajayi Crowther are left out), but it reflects still more that these chapters in church history remain unread even by people, like myself, who teach the story of Christianity to students. So the authors hope that their book will “open up histories from which names may arise that one day count for the world Christian community the way that Evangeline Booth, William Carey, Billy Graham, Madam Guyon, Charles Haddon Spurgeon, Hudson Taylor, John Wesley, George Whitefield and Francis Xavier now count among Western Christians” (p. 10).

Given that lofty aspiration, and the book’s theme of sharing confessions of faith that can serve as examples to others, it’s fair to wonder if the authors are engaging in hagiography or history. Can the events in these stories be verified by historical methods, or are they constructed so as to inspire and instruct? It’s a fair question in part because, as the authors admit in the introduction, they’re often working with fragmentary evidence (particularly in the case of earlier African stories), linguistic and cultural differences prone to cause uncertainty (e.g., Noll and Nystrom share the story of Korean Christian Sun Chu Kil, but admit confusion about something as basic as his name), and ongoing interpretive debates. So the temptation to minimize those problems, polish off rough edges, and tell uplifting tales of saints is real.

Now, few religious historians are as widely respected, by Christians and non-Christians, as Mark Noll, and Nystrom is a capable writing partner. But ultimately, our authors admit that they are not seeking to resolve historiographical controversies in this work of popular history:

Our intention, rather, has been to offer as much information in short compass as possible, to present controversial matters as fairly as we can, to try to communicate something about the humanity of each figure and then deliberately step back. One of the benefits of this approach is to grasp how much sympathetic engagement is required even to begin serious assessment of peoples, cultures and activities very different from our own. (p. 14)

And if you’d like to venture into works of more “serious assessment,” each chapter concludes with research notes and suggestions for further reading.

My goal is to work through the book in clusters of two or three stories related by chronology and/or similar experiences. We’ll start tomorrow with a pair of Africans who came to Christ in the middle of the “new” imperialism of the late 19th and early 20th centuries: Bernard Mizeki and John Chilembwe.

>>Read the next entry in the series