I can put up with almost every other inconvenience, but not getting to sing as part of a group for the duration of COVID has been a tough pill to swallow. Whether in a choir or as part of a congregation, I love to sing the songs of the church with the people of the church. Building from the foundation of the Hebrew poetry in the psalter, the sung canon of Christianity expresses every emotion that humans experience.

But I’m not sure I’ve ever sung a song that was meant to serve as God’s witness against God’s people. A song like the one Moses sings at the end of the Book of Deuteronomy, today’s Old Testament reading in the daily lectionary:

The Rock, his work is perfect,
and all his ways are just.
A faithful God, without deceit,
just and upright is he;
yet his degenerate children have dealt falsely with him,
a perverse and crooked generation.

In yesterday’s reading from the preceding chapter, Moses has one last conversation with the God he met as a young man in a burning bush. “Your time to die is near,” the Lord tells the 120-year old prophet, after which his “people will begin to prostitute themselves to the foreign gods in their midst… they will forsake me, breaking my covenant that I have made with them” (31:14, 16). Knowing that he will “surely hide my face” from a wayward people who won’t understand why “our God is not in our midst,” the Lord gives Moses a song for him to teach his people — not in the hope that it will keep them from their future idolatry, but “in order that this song may be a witness for me against the Israelites” (vv 17, 19). And again, he repeats, “when many terrible troubles come upon them, this song will confront them as a witness, because it will not be lost from the mouths of their descendants” (v 21).

“This is no trifling matter for you,” Moses tells his people, commanding them “to take to heart all the words that I am giving in witness against today,” and even to pass them down to their children (32:46).

There are grace notes in the song of Moses, hints of future hymns of hope. “Indeed the Lord will vindicate his people, have compassion on his servants, when he sees that their power is gone, neither bond nor free remaining” (v 36) may foreshadow Mary’s great song to a God who lifts up the lowly and feeds the hungry, helping “his servant Israel, in remembrance of his mercy” (Luke 1:52-54).

But otherwise, it’d be a hard song to sing — not one whose words I can remember showing up in a Christian hymnal. 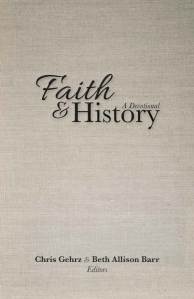 In our Faith and History devotional (due out in just over a month), one of my own contributions quotes one verse of Moses’ song: “Remember the days of old, consider the years long past” (32:7). I was thinking of that imperative in light of Deuteronomy’s earlier exhortations not to forget the Israelites’ experience of enslavement and emancipation (e.g., “Remember that you were a slave in Egypt, and diligently observe these statutes,” Deut 16:12).

But alongside that story of liberation, Moses’ song is meant to keep its singers from forgetting their role in a story of rebellion. “Remember,” he sings to “the whole assembly of Israel,” when you “sacrificed to demons, not God,” when “you forgot the God who gave you birth” (32:17-18). If any among them should forget that “they are a nation void of sense” (v 28), then he can “ask your father, and he will inform you” (v 7).

If we Christians are also a people of memory, then we must sing songs (literally or metaphorically) that help us remember our versions of both stories: how God set us free in Christ… and how we continue to turn from him.