Tonight HBO premieres the first episode of a six-part adaptation of Philip Roth’s 2004 novel, The Plot Against America. Since its alternate history premise centers on the subject of my current writing project, I thought some of my readers might be interested in my response to Roth’s book — originally published at The Anxious Bench after Roth’s death in 2018. Be aware that there are spoilers, for the book at least.

Fear presides over these memories, a perpetual fear. Of course no childhood is without its terrors, yet I wonder if I would have been a less frightened boy if Lindbergh hadn’t been president or if I hadn’t been the offspring of Jews.

So starts The Plot Against America, the 2004 novel by Philip Roth that imagines history taking a diversion in June 1940. Lacking a clear frontrunner to contest Franklin D. Roosevelt’s attempt at an unprecedented third term, delegates to the Republican National Convention nominate a political unknown: not industrialist Wendell Wilkie, an internationalist who badly wanted to aid Britain in its stand against Nazi Germany, but aviator Charles Lindbergh, an isolationist who as badly wanted to keep the U.S. out of the war. I haven’t read much of Roth’s work, but as someone who teaches World War II, did his dissertation on Nazi Germany, and is writing a Lindbergh biography, I’ve felt destined to read Plot Against America. (More on inevitability before we’re done.) So when Philip Roth died one week ago, it seemed like the right moment to pick up a copy of his attempt at alternative history.

Not that it will be all that useful for my spiritual biography of Lindbergh. I suspect that a novel told from the point of view of a New Jersey schoolboy named “Philip Roth” tells us more about an aging author named Philip Roth than it does about the famous American whom young Philip describes early on as “A natural person of gigantic strength and rectitude combined with a powerful blandness. Anything but a frightening villain or a menace to mankind.” Roth quotes the most damning of Lindbergh’s written and oral statements from a period that reversed his standing in American opinion. But ultimately, he seems unsure what to make of his novel’s central villain. In the penultimate chapter Roth suddenly interjects a conspiracy theory: Lindbergh may have been forced to speak and act as he did by a Nazi regime that had kidnapped his son, raised young Charles, Jr. as a Hitler Youth, and held him as a hostage.

But if it doesn’t shed all that much light on the man whom Philip’s mother calls “a goyisch idiot flying a stupid plane,” Plot Against America certainly reveals a more central concern in the writing of Philip Roth: what it meant to be Jewish in mid-20th century America. Like the author himself, Philip grows up in a Newark neighborhood where Hebrew could be found on butcher’s windows and in rarely-attended synagogues, but was otherwise displaced by English, “the native tongue employed all the time by practically everyone for every conceivable purpose, high or low…. Our homeland was America.” 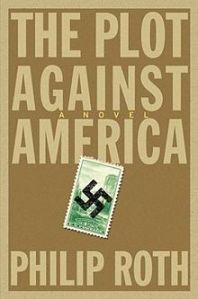 But as Philip’s family and neighbors realize how much their Christian fellow citizens actually love the “goyisch idiot,” they debate how to respond. An unctuous rabbi named Lionel Bengelsdorf becomes the novel’s epitome of Jewish collaboration with the Lindbergh regime, as he insists in his “courtly Southern accent” that “I want Charles Lindbergh to be my president not in spite of my being a Jew but because I am a Jew—an American Jew.” Bengelsdorf becomes the director of the Office of American Absorption, whose “Just Folks” program gives Jewish children a chance to live and work in bastions of the Christian heartland. Philip’s older brother Sandy is so affected by his time on a tobacco farm that he derides his defiantly anti-Lindbergh parents as “ghetto Jews.” Herman Roth quits his job rather than be transferred to Kentucky, but fails to take chances to flee to Canada. He and his wife, Bess, struggle to protect their family as pogroms sweep the country.

Then things get more dramatic — and, to my mind, much less convincing. Lindbergh’s mysterious disappearance during a cross-country flight in the Spirit of St. Louis leads to a coup d’état that threatens to deepen the Nazification of the country. After KKK men assassinate Walter Winchell and government forces round up Fiorello La Guardia and FDR himself, Anne Morrow Lindbergh broadcasts patriotic statements on national radio that break the spell. Charles Lindbergh is never found, but FDR emerges from custody to win a third term in a special election in November 1942. America is soon at war with Germany and Japan.

So what if Charles Lindbergh, despite his oft-stated disinterest in political office, had run for president in 1940? “The obvious objection to such hypothetical or ‘counterfactual’ questions is simple,” wrote historian Niall Ferguson seven years before Roth’s novel, “why bother asking them? Why concern ourselves with what didn’t happen?”

Introducing a 1997 collection of alternative histories, Ferguson admits that most in our discipline have dismissed the value of such speculation. Even if historians could think historically about a past that didn’t happen, the more deterministic among them could never believe that history might swing on a hinge as insignificant as one man’s ambition — or lack thereof — to be president of the United States. “The long run always wins in the end,” Ferguson quotes Fernand Braudel, “Annihilating innumerable events… it indubitably limits both the freedom of the individual and even the role of chance.”

Indeed, history doesn’t seem all that contingent in Roth’s telling. Looking back, Philip realizes that his principled, stubborn father

was powerless to stop the unforeseen. And as Lindbergh’s election couldn’t have made clearer to me, the unfolding of the unforeseen was everything. Turned wrong way around, the relentless unforeseen was what we schoolchildren studied as “History,” harmless history, where everything unexpected in its own time is chronicled on the page as inevitable. The terror of the unforeseen is what the science of history hides, turning a disaster into an epic.

If a child like Philip, a man like his father, or their people as a whole are unable to stand up to “the relentless unforeseen,” neither are those plotting against America. Not only are the country’s fascists removed from power, but a month after FDR belatedly begins his third term, Japanese forces attack Pearl Harbor. History ends its year-long detour into nightmare, and the world resumes the familiar path that leads to Germany’s unconditional surrender in May 1945. The long run wins in the end.

But Ferguson is not so sure that history is so inevitable. “The past is different,” he concludes, in his erudite introduction to Virtual History, “it does not have a predetermined end. There is no author, divine or otherwise; only characters, and… a great deal too many of them. There is no plot, no inevitable ‘perfect order’; only endings, since multiple events unfold simultaneously, some lasting only moments, some extending far beyond an individual’s life.” I do believe there is a divine author who is (mysteriously, unknowably) involved with history, but I too think that there’s a way to think about causality without eliminating contingency. 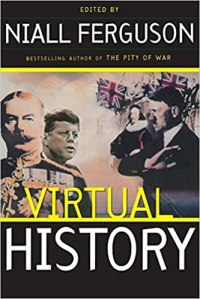 So why ask What if? Because, suggests Ferguson,

by narrowing down the historical alternatives we consider to those which are plausible — and hence by replacing the enigma of ‘chance’ with the calculation of probabilities – we solve the dilemma of choosing between a single deterministic past and an unmanageably infinite number of possible pasts. The counterfactual scenarios we therefore need to construct are not mere fantasy: they are simulations based on calculations about the relative probability of plausible outcomes in a chaotic world (hence ‘virtual history’).

For that 1997 book, Ferguson considered two such scenarios ending World War II early: one in which Germany forced England from the war by May 1940; another that has the Wehrmacht defeating the Red Army. He and his collaborators in Virtual History don’t consider the President Lindbergh counterfactual, and I’m not sure if it could meet his requirement that “We should consider as plausible or probable only those alternatives which we can show on the basis of contemporary evidence that contemporaries actually considered.”

But the author of a book on the same political convention that starts Plot Against America concludes that Roth’s possibility “was not at all remote,” since Willkie’s major rival was Sen. Robert Taft, “a man whose views, except for his lack of anti-Semitism, were almost identical to Lindbergh’s.” That’s a big exception, of course, for Roth’s purposes, but it does point to one value of this counterfactual: it forces us to ask how central anti-Semitism was to the America First movement.

And perhaps we should even go a step further and ask how prevalent anti-Semitism was among American Christians who, even when they finally joined the fight against Hitler, rarely did so for the sake of saving Jews. I have a hard time imagining even the American Kristallnacht of September 1942 that Roth sets in Father Coughlin’s Detroit, but it’s all too easy to envision an isolationist America looking on as the Shoah consumed even more than six million Jews.

In the end, I tend to think of Roth’s story as being more like a child’s nightmare than a historian’s analysis of probability. Like such dreams, it borrows fragments of memory to keep a fantasy feasible enough to sustain the “perpetual fear” that starts, ends, and runs through Plot Against America.

Also like nightmares, Roth’s novel may function primarily as a way to help us confront traumas that we’d rather ignore.

It’s hard not to feel queasy reading The Plot Against America in a time when fascism has reentered our domestic political vocabulary: when an American president hesitates to condemn neo-Nazis and the national news barely notices when someone spray-paints swastikas on hundreds of graves. “The Plot Against America resonates so deeply,” Ezra Klein argued after Roth’s death, “precisely because it’s not about Trump — because it’s about someone more subtle, more appealing, and thus, more dangerous. The Plot Against America resonates because it is about us, because it is convincing in its argument that it can happen here, that there will always be those among us who want it to happen here, and if we are not vigilant, someday, it will.”

Postscript: because I ended my 2018 with that comparison — one that several critics have raised in reviewing the HBO miniseries, I’ll point you to what David Simon, its writer-producer, says Philip Roth told him on the subject.