Back in the fall of 2016, while my family was on sabbatical in Virginia, an editor’s suggestion that I write a religious biography of Charles Lindbergh made him the unnamed center of a three-part series on biography that I wrote for The Anxious Bench. If I did write such a book about Lindbergh, I mused in the first post,

I’d need to bear in mind that I’d be writing a biography of someone who was well aware of his place in history. Not entirely defenseless, [such people] consciously sought to shape their legacies in ways that would survive them. They are not merely objects of historical analysis; even in death, they remain active interpreters of their own lives.

As I started to read up on Lindbergh, it didn’t take long to realize that this was not someone content to sit by and let posterity judge him as it saw fit.

Realizing that he had become a much more controversial figure during the debates over U.S. involvement in the Second World War, Lindbergh not only started to deposit his papers at Yale University, but accelerated his efforts towards an autobiography. Then after The Spirit of St. Louis came out in 1953, he turned to the never-completed work of drafting a final, comprehensive statement on his life and values. (That manuscript was edited posthumously by publisher William Jovanovich and Yale archivist Judy Schiff as Autobiography of Values.) Near the end of his life, Lindbergh took to writing out voluminous page-by-page corrections (factual and interpretive) for previous biographies. Even when he opened his papers to Wayne Cole for that historian’s serious, even generous study of Lindbergh’s role in the America First movement, the flyer both insisted that he didn’t want an “apologia” and argued over and over against even the slightest criticism of his views on Nazi Germany.

So it’s been rather revealing to spend much of the summer reading a set of sources from a less defensive eyewitness: the diaries and letters that his wife, Anne Morrow Lindbergh, published just before and after Charles’ death in 1974, starting with Bring Me a Unicorn (1972) and ending with War Within and Without (1980). After Anne died in 2001, the Lindberghs’ youngest daughter, Reeve, edited a final volume that covered the years 1947-1986 and published her own journal of her mother’s last years. 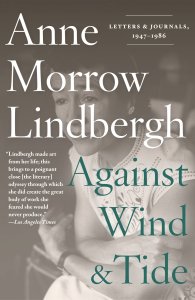 “As a writer,” Reeve said of her mother, “she was honest, eloquent, and deeply reflective, always seeking to understand life as it unfolded before her, always wanting to share her understanding with others: her husband, her children, her family and friends, and ultimately her readers.” That’s true of books like the bestselling Gift from the Sea (which I noticed on a bookstore’s Christian inspiration shelf while I was considering this project in 2016), but also of diaries and letters that she chose to reread late in life and then make available to the public. That action alone staggers me: I can’t imagine how so private a person would be so generous as to share more of a life that had already been subject to some of the most intense, unforgiving scrutiny in American history.

That she did unveil so much of her interior life will undoubtedly improve my biography of her husband, and not only because she was the closest, most perceptive observer of him. While I decided against writing a dual biography of the Lindberghs, Anne’s own “spiritual, but not religious” story serves as a useful contrast to that of Charles. For example, it’s striking how deeply shaped she was by the Presbyterian piety of her upbringing, which included regular participation in Sunday School and public worship, plus family devotions and then chapel services at Smith College. She may have ceased to be a regular churchgoer in adulthood, but unlike her unchurched husband, she drew widely and naturally from the King James Bible, plus that of Christian hymnody and spiritual literature, in her public and private writing.

Then there’s this contrast between the two Lindberghs… Charles primarily devoted himself to autobiography, keeping a diary only at certain points in the late 1930s and 1940s (much, but not all, of which was published in 1970) and even told his wife not to waste time on letters when he thought she should be writing novels and other books. (That said, his own correspondence is a rich, albeit unpublished source for biographers.) But Anne consciously decided against writing her own story. Here’s how she explained her decision to publish Bring Me a Unicorn rather than a memoir:

To write an autobiography would mean sifting, picking and choosing, shaping and cutting, and then putting the material into orderly chapters, finished portraits, and polished phrases. There is much to commend such a process. A more unified literary work certainly results. But there are certain drawbacks. What remains in the end is the point of view of a mature person only. At best—and its ‘best’ is very good indeed—an autobiography reveals a glimpse of life seen at the end of a telescope, from a single stance, that of a woman in the last third of life. At worst, what sometimes emerges can be a glossed-over, retouched picture, mild, pleasant, and perhaps edifying, but, on the whole, static…. One wants to be an honest witness to the life one has lived and the struggle one has made to find oneself and one’s work, and to relate oneself to others and the world.

She admits the problems of the diary as a historical source, as when it’s “written by a person brought up in the Protestant tradition, without benefit of confessional and before the heyday of analysis [as] an attempt both to understand and forgive the blunders and difficulties of the writer.” But what she published is a strikingly “honest witness,” whether she’s shedding light on the insecurities of a recent college graduate unsure of her future direction, the agony of losing a child, or her own response to the rise of Nazi Germany.

Anne addressed that last topic in introducing the middle volume in the series (The Flower and the Nettle, covering 1936 to 1939), where she acknowledges coming “to a difficult point in the project of publishing my diaries and letters….

It would have been easier, and far kinder to myself and my husband, if I had written a condensed, softened, and retouched autobiography, omitting what I disliked, adding later knowledge, creating, in fact, the desired pleasant image I wanted to remain in the minds of my readers and posterity.

But in my life I have become sickened with images. Fame always creates images around its victims or heroes. “Fame,” as [poet Rainer Maria] Rilke once said, “is the sum of the misunderstanding that gathers around a new name.” We have been the victims—not entirely blamelessly—of images, over-sugary and bitterly sour, for almost fifty years. In these volumes, I wanted above all to dispel the images, both good and bad, to give our lives as they were—or, at least, as they seemed to me then, not now in retrospect.

It’s an admirable example of the humility and vulnerability that characterize all of Anne Morrow Lindbergh’s writing — and contrasts markedly with her husband’s stubborn reluctance to relinquish interpretive judgments to others. “Ultimately,” she concluded, “it is the task of the historian to sort out and unmask the images of another epoch…. The diaries, although not history, fall under the heading of history’s raw material.”