As usual, I’m struggling to keep up with both blogging and end-of-semester grading, so I’m two days late to J.C. Derrick’s typically well-informed report for World Magazine that the boards of the National Association of Evangelicals (NAE) and Council for Christian Colleges & Universities (CCCU) have endorsed what’s been called the “Fairness for All” compromise: seeking to advance LGBT rights in tandem with religious freedom, rather than treating them as intractable opponents.

(Full disclosure: my boss — Bethel University president Jay Barnes — is the chair of the CCCU board.)

Houghton College president Shirley Mullen (a member of both boards) explained the strategy in an NAE paper published by World:

Since the Hobby Lobby decision in 2014 and especially since the Obergefell decision in 2016, it has been easy for legislation supporting religious freedom to be seen as simply permission to discriminate.

As Christian higher educators, we are increasingly persuaded that the most viable political strategy is for comprehensive religious freedom protections to be combined with explicit support for basic human rights for members of the LGBT community. (These rights include basic legal and human rights related to housing, credit, jury duty and employment — and do not imply affirmation for particular lifestyle or moral choices.)

In short, the NAE and CCCU would support expanding federal nondiscrimination laws to include sexual orientation and gender identity (SOGI) as protected categories… in legislation that would also more clearly protect “the ‘free exercise’ of religion especially as this relates to institutions that carry on non-religiously explicit tasks but are nevertheless motivated by faith and informed by faith” — say, Christian colleges and universities that don’t hire non-celibate LGBT employees and don’t permit students to engage in same-sex romantic relationships.

As John Fea notes in his post on the subject, “Not all evangelicals are on board with this idea. Back in December 2016, a group of Christian leaders (mostly evangelicals and conservative Catholics, 68 male and 7 female and a small number of people of color) signed a statement opposing the support of SOGI laws.” On the other side of the coin, it’s not clear that this legislation could receive the support of leading LGBT rights organizations like Human Rights Campaign, which in 2015 supported a “fairness for all” initiative in Indiana “as a solution to stop the damage caused by the new Indiana anti-LGBT religious discrimination law signed in to law” by the state’s governor: Mike Pence, a year and a half away from being elected Donald Trump’s vice president.

“Despite the challenges of passing legislation in today’s partisan environment,” Mullen argues, “we strongly believe that this religious freedom is best secured in a legislative context rather than by executive order or rulings by the attorney general — both of which have expiration dates and can be undone by subsequent presidents and attorneys general.” With an eye to a 2020 election that may not return Donald Trump to the Oval Office, the NAE and CCCU may be thinking wishfully that Fairness for All “can garner bipartisan support” at a time when Democrats control the House and Republicans the Senate.

But this approach likely also reflects the lingering hope that there might be a national version of the “Utah Compromise,” a 2015 law backed by the Church of Jesus Christ of Latter-day Saints that combined SOGI and religious freedom protections.

Indeed, “fairness for all” was a central theme of Wednesday’s farewell address by one of the nation’s leading Mormon politicians. Without addressing higher education specifically, Sen. Orrin Hatch (R-Utah) pointed to his state’s compromise legislation as suggesting a “pluralist” way forward: 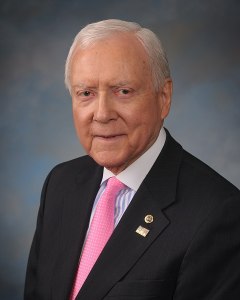 The adversary of pluralism is zero-sum politics, which we embrace at our own peril. Zero-sum politics tempts us to view life through an absolutist prism—one that filters all nuance and recasts everything as an either-or fallacy. This distorted way of thinking renders every policy squabble as a Manichean struggle for the soul of the country. If the Republican tax bill passes, it will be Armageddon. If a Democrat takes the White House, it will be the end of America as we know it. Funny how these prophecies never come to fruition.

Answering the call to our better angels requires us to reject zero-sum politics in favor of pluralism. It requires us to make room for nuance and to see our differences not as competing but as complementary.

Nowhere is the pluralist approach more needed than in the fraught relationship between religious liberty and LGBTQ rights. As my colleagues know, I’ve made religious liberty a priority of my public service. Of all the hundreds of pieces of legislation I’ve passed during my 42 years in the Senate, the one that I’m most pleased with, and the one that I hope will most define my legacy, is the Religious Freedom Restoration Act. Religious liberty is a fundamental freedom. It deserves the very highest protection our country can provide.

At the same time, it’s also important to take account of other interests, especially those of our LGBTQ brothers and sisters. We are in the process now of working out the relationship between religious liberty and the rights of LGBTQ individuals here in America. There are some who would treat this issue as a zero-sum game, who would make the religious community and LGBTQ advocates into adversaries. This is a mistake.

Pluralism shows us a better way. It shows us that protecting religious liberty and preserving the rights of LGBTQ individuals are not mutually exclusive. I believe we can find substantial common ground on these issues that will enable us to both safeguard the ability of religious individuals to live their faith and protect LGBTQ individuals from invidious discrimination. We must honor the rights both of believers and LGBTQ individuals. We must, in short, find a path forward that promotes fairness for all.

Now, I’m not sure that a conservative Republican who voted with Donald Trump over 96% of the time — 14 points higher than predicted by 2016 election results — is the best person to exhort Americans to seek after the “better angels” of unity and civility. But I wonder if Hatch’s successor, if he hopes to carve out space as a conscientious conservative with the ability to work across the aisle, might not champion a compromise like the one suggested by the NAE and CCCU…

One thought on “Fairness for All: Is There a Compromise Between Religious Freedom and LGBT Rights?”