Over the weekend I took the long way from Washington, DC to New Haven, CT in order to spend an hour in an 18th century outpost of Pietism in America.

The Saal, or meeting hall, where Moravians worshipped — women on one side, men on the other (compare to the same space in Iowa’s Amana Colonies). The Zinzendorf hymn on the wall is “Christ’s Blood and Righteousness”

In 1741 Moravian emigrants came to the North American colony of Pennsylvania. It had been almost twenty years since Moravian refugees had first settled on the estate of Count Nikolaus von Zinzendorf, a religious reformer influenced by the Pietism of Philipp Spener and August Hermann Francke. After a revival (“Moravian Pentecost”) started in 1727, the Moravians had begun to send missionaries far from Europe, with one group landing in the English colony of Georgia — where they impressed a frustrated Anglican priest named John Wesley. Another settled on land in Pennsylvania owned by revivalist George Whitefield and founded the community of Nazareth in 1740. The next year, on Christmas Eve, Zinzendorf himself helped inaugurate the nearby community of Bethlehem, where the Moravians flourished and left behind buildings that stand to this day.

Or something like that. To be honest, I’m not much of an expert on Moravianism. Our friend Jared Burkholder is really the one to tell this story.

But I knew enough to know what was being left out by our docent when I took a tour of the Moravian museum that now occupies the Gemeinhaus where the first Bethlehem settlers lived. While she knew that the Moravians in Nazareth had broken with Whitefield over theological differences, that was about as much religious history as we heard. She noted that the walls of the Saal where the Moravians initially worshipped are painted with one of Zinzendorf’s many hymns, but said nothing about his theology. (I’m not sure what he would have thought of her claim that the Moravians, contra Whitefield, believed in earning salvation “by good works.”) She didn’t explain Whitefield’s larger significance in the evangelical awakenings of the 18th century, and his friend Wesley didn’t come up at all. Nor did we hear about the role that Pietism had played in catalyzing either those revivals or the Moravian movement itself.

Also from the Saal… the engraving on top shows a child being baptized; on the bottom, “Exorcism of those to be Baptized from among the Negroes” 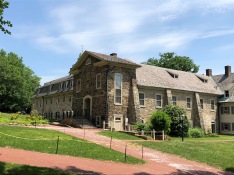 There were hints about the distinctive patterns of Moravian life in Bethlehem. One of many attempts at communal living by pietistic immigrants, the residents of the community were initially ordered by “choirs” determined by age, gender, and marital status. Our docent pointed out that young children left their parents to join nurseries, and that spouses (otherwise segregated by sex) had to make arrangements to share a marital “Cabinet” for brief interludes.

But you’ll need to read Jared’s 2014 post on Moravian sexuality to understand why “Moravians were taught to accomplish the task while focusing on their union with Christ, and with the least amount of physical arousal.” And needless to say, our tour made no mention of the more controversial aspects of Moravian sexuality, such as those discussed by Paul Peucker in A Time of Sifting. The museum paid more attention to Moravian industry. (Though I didn’t have time to visit the waterworks, tannery, or other workshops.)

The house where the Single Sisters’ choir resided

The blacksmith’s shop (center), with the Bethlehem Hotel in the background 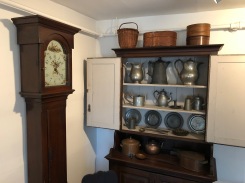 But I was happy to see rooms dedicated to the Moravian passions for music and education. The latter inspired me to interrupt my drive out of town long enough to pause at the campus of Moravian College and take a picture of the great educational reformer Johann Amos Comenius.

A sampling of Moravian musical instruments 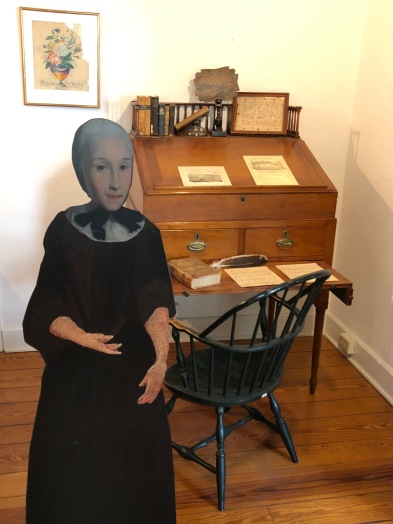 Zinzendorf’s eldest daughter Benigna accompanied him to Bethlehem, where she founded a girls’ boarding school that eventually grew into Moravian College and Seminary 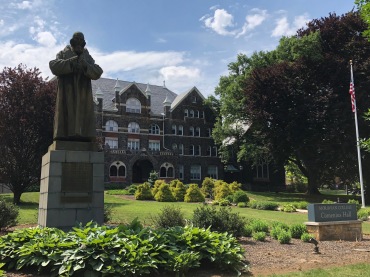 What can I say? Learning about Moravian history is hard, thirsty work…