“There is a free speech crisis on campus,” wrote Sarah Jones yesterday for The New Republic, “but it’s not at Yale or Middlebury. It’s at Liberty University and schools like it.” In other words, the true threat to free speech in higher education does not come from leftist students and professors trying to stifle conservative voices, but from right-wing Christian college leaders like Jerry Falwell, Jr., who reportedly kept a student newspaper reporter from covering the progressive evangelical Red Letter Revival this past weekend. (That after Falwell declined to pray with organizer Shane Claiborne and evidently tried to keep him off campus. Read David Swartz’s field report this morning at Anxious Bench for more on the recent events on Lynchburg.) Jones also referenced the treatment of Larycia Hawkins at Wheaton College in 2015, complaints that BYU’s honor code effectively silences victims of sexual assault, both BYU and Liberty arresting LGBT activists trying to come on campus over a decade ago, and her own fraught experience as a student-journalist at Cedarville University, where she felt “Stifling, totalizing fear: That’s what it feels like to lack free speech.”

Yet again, I want to scream that Jerry Falwell is not the face of Christian higher education — even if he is the president of the country’s largest Christian university.

Now, Jones allows that this country’s 1,000+ religious colleges “are not all alike.” But I wish she had made more clear that it’s not just Catholic universities like Georgetown that “combine a religious outlook with relative tolerance for dissent” and “sit at one end [of the free speech spectrum].” If Cedarville and Liberty, in Jones’ analysis, “reveal how far the right-wing will go to preserve its doctrinal purity,” then what do we make of the Christian liberal arts institution where I work?

To almost all outside observers, Bethel University would seem to be just as theologically conservative as Liberty and Cedarville — and our students (and perhaps employees) tend to be more politically conservative than their peers on other campuses. But this week at Bethel includes the following events: 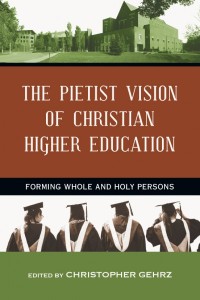 And that’s on top of all the wide-ranging discussions that take place every day in classes where Christian students and faculty engage with complicated, conflicting ideas and perspectives.

I don’t mean to sound naive. I know that events like those I’ve mentioned raise the hackles of many constituents, some of whom complain quite vocally to our leaders. I’d guess that the most progressive and most conservative members of our faculty both think that there’s too little of their point of view and too much of the other extreme in campus discourse. And there are definite limits on what is acceptable for faculty and students to say and do — as there would be at any university.

But at its best, I think Bethel and many other colleges and universities like it actually do nurture the kind of intellectual freedom whose absence Jones laments. (And for all my concerns about Falwell’s leadership of Liberty, I’m sure that professors at that university could compile a list of events similar to mine — perhaps including Bernie Sanders’ convocation address in 2015.) And that’s true not in spite of Bethel being Christian, but because of it. Because the Christian virtues of faith, hope, and love animate the intellectual virtues of hospitality, open-mindedness, and humility. (See, for example, the chapter in our Pietist Vision of Christian Higher Education book written by Sara Shady and Marion Larson, two of Patel’s hosts on Monday.)

2 thoughts on “Is There a Free Speech Crisis at Christian Colleges?”