The newest episode of The Pietist Schoolman Podcast is now available! It features Sam and me talking about the Christianity that lies on the other side of 1517: the faith of the Middle Ages. 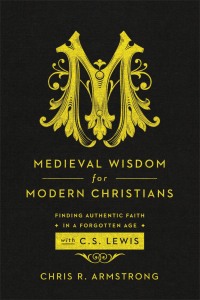 We covered everything from grace and penance to Incarnation and sacramentalism, plus medievals’ relationship to the past. Our featured book this week is Chris Armstrong’s Medieval Wisdom for Modern Christians, which argues (with help from famous medievalist C.S. Lewis) that evangelical Protestants should especially pay attention to the Middle Ages — as a potential corrective to their “immediatism.” I wrote a bit about that earlier this week, in a preview of the podcast for The Anxious Bench:

What’s needed, Chris concludes, is not a choice between immediacy and mediation, but a both/and strategy. For “if we read [the medieval] period honestly we will find something like the ordered minuet of immediate and mediated modes of faith—here a sober celebration of church and sacrament, there a joyful riot of ecstatic personal encounter with God.” Mystics like Margery Kempe and Richard Rolle, for example, will “teach us to approach Christianity as whole persons, physical and emotional as well as intellectual.”

And that’s certainly a kind of Christianity that I can embrace.

Could it be that I’m really a medieval at heart? I often make the claim that we Pietists are Christians who both believe in the Resurrection and live as if they believe in the Resurrection. But in his chapter on the “sacrificial Christian compassion” of medieval health care workers, Chris observes that “This was a society that most certainly did both believe in God and live as if there was a God.”

C.S. Lewis, The Discarded Image: An Introduction to Medieval and Renaissance Literature (1964)

By the way, the music we’ll be using this season comes from the catalog of J.S. Bach pieces performed by Professor James Kibbie on Baroque-era organs in Germany — and available on the Free Music Archive: (both CC BY-NC-ND 3.0)