Among the endorsements that The Pietist Option has already received, one of my favorites comes from Brian McLaren, author of Generous Orthodoxy and The Great Spiritual Migration:

One of my mentors used to describe himself as ‘a Pietist with a PhD.’ After reading The Pietist Option, I know more deeply what he meant, and I realize more clearly why his winsome spirit won my heart. This book invites us all into a more just and generous way of following Christ in today’s world.

I’d be happy if all we did was put that last sentence on the cover of the book. But I also appreciate McLaren reminding me of the legacy of theologian Stanley Grenz, who once said this to members of the American Academy of Religion (AAR):

The concern for heartfelt piety does not only tie me to my own immediate genealogical history; it also links me to a long trajectory of proponents of an approach to the faith that dates at least to the eighteenth-century Great Awakening. Yet I am also a vocational theologian schooled in the great tradition of systematic theology with its focus on the intellectual aspect of the Christian faith, including the concern for right doctrine. Over two decades as a theological educator, I have remained committed to pursuing the “understanding” dimension of the “faith seeking understanding” dictum, with Scripture functioning as the ultimate touchstone for Christian belief. In short, two strands run through my spiritual psyche: a non-negotiable concern for the work of the Spirit in transforming human hearts and an unabashed commitment to a Bible-focused intellectual rigor. You might say that I’m a “pietist with a Ph.D.”

In his 2002 AAR talk, Grenz traced the complicated influence of Pietism on evangelicalism. On the one hand, he warned that “when allowed to become the sole defining characteristic of the Christian faith, warm-heartedness can lead to wrong-headedness, that is, to doctrinal slippage or to a virulent anti-intellectualism.” But Pietism’s emphasis on convertive piety has been “the lifeblood of evangelicalism throughout its history and has formed its central contribution to the cause of renewal in the church of Jesus Christ.”

Nevertheless, Grenz observed a decline in the influence of Pietism on evangelicals, as a “growing number of evangelical theologians now set themselves to the task of shoring up doctrinal standards for the movement, even to the point of claiming that the essence of evangelicalism consists in adherence to right doctrine. Some protagonists go so far as to elevate the doctrinal heritage of a particular ecclesial tradition or a particular theological interpretation of such points of doctrine as the nature of salvation as the norm for all who would claim the designation ‘evangelical.'”

In the end, Grenz argued for “integration,” for evangelical “allegiance to both heartfelt piety and orthodox doctrine.” But he worried more about the effects of leaning too hard on the latter, which threatened to strip away “the distinctive character of evangelicalism as a renewal movement within the church,” risked “the demise of the generous spirit that has characterized evangelicals from the beginning,” and, most importantly,

can blunt the central insight evangelicalism offers to the church, namely, that genuine Christian faith dare never be equated with externalism in any form, including the externalism entailed in mere adherence to orthodox doctrine.

So in the end, Grenz insisted that “the commitment to convertive piety must remain the integrative principle of the evangelical ethos.” 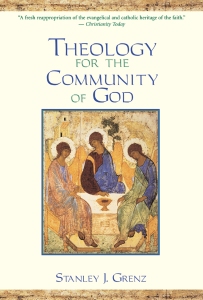 Tragically, Grenz died of a brain hemorrhage just three years later, depriving evangelicalism of one of its wisest, most winsome theologians. “Stan wrote with a gracious style and spirit that invited people into the conversation rather than throwing down gauntlets and pushing people away,” McLaren told Christianity Today at the time.

But then-Union University president David Dockery marked Grenz’s death by arguing that “his pietism didn’t translate into evangelical coherence or orthodox consistency. I will miss Stan Grenz, but I have learned from him one thing for sure: Piety is not enough in and of itself to carry forth doctrinal conviction and the great Christian intellectual tradition.”

I’m afraid that since then, evangelicalism (among its other problems) has only continued to move more in Dockery’s direction, and less in Grenz’s. But hopefully our book (with my earlier work on Pietism and Christian higher education) will help restore the balance that Grenz advocated.

You can read more about Grenz and Pietism on pp. 171-76 of Reclaiming Pietism: Retrieving an Evangelical Tradition, co-written by Grenz’s friend Roger Olson.